My mum got us a ginormous mixer/blender/more attachments than I know what to do with thingie for Christmas. When we got it, we couldn't figure out how to actually open the blender jug, and it was nowhere in the instructions. Everything we tried seemed like it would break a brand new blender jug, so we put it in the back of the cabinet, emailed the company, and kind of forgot about it. Till the end of January, that is, when I remembered, and we pulled it out, carefully examined the largely unhelpful diagram on a sticker, and then realised it was actually quite easy. The tricky part was that the blender doesn't unscrew normal way - instead of "righty tighty, lefty loosey", it is some non-rhyming, and thus nonsensical, scheme. 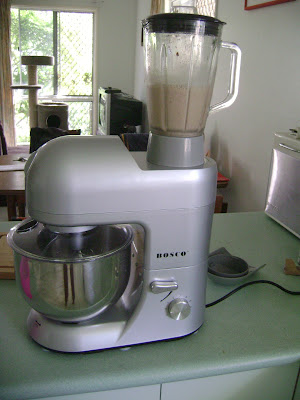 Once we figured out how to open it, we could use it. That coincided with me being home alone for the past two weeks, and I decided that while Andy was away, I'd have a smoothie every day! I don't know why it had to be when he's away, but it made sense at the time.

Andy comes home tomorrow, so now seems like a good time to share my smoothie knowledge, and photos. Some of these things may not be revelations to anyone, but they were to me - I've been slow to the smoothie bandwagon, because of the lack of blender till now.

Frozen fruit makes a smoothie which is more like a bowl of ice cream. And there is nothing more wonderful than having a bowl of ice cream for breakfast. Fruit that is cut before freezing is best for my (non-Vitamix) blender, except in the case of bananas - whole-frozen bananas break into pieces pretty easily, but once they've been sliced it seems the pieces freeze together into a block.

Frozen pineapple is really good, but it's probably worth cutting out the fibrous core before freezing. We don't bother with this when we're eating pineapple, but there were a few fibrous chunks in my pineapple-y smoothies.

Green smoothies are fo reelz - they don't taste like spinach at all. I knew this in my head, and have always thought green smoothies are a cool idea, but when confronted with my first celadon-hued smoothie, I was a bit trepidatious. Until I had a taste.

In addition to adding green veggies, you can make orange smoothies, with carrot!

Adding a small handful of oats, soaked overnight in water or milk (soy or coconut, for me), makes me feel full all morning.

I had the clever (I thought) idea of soaking almonds and adding them to the smoothie, like basically making almond milk without straining. Not a good idea - the smoothie had lots of throat-tickling chunks of almond that were still chew-able, rather than soft. Almond meal, however, is a good way to pump up the protein for a post-exercise smoothie without choking.


I prefer to eat my smoothie out of a bowl, with a spoon, in almost every case. This reduces the likelihood of painful brain freezes.  This one looked thin enough for a glass, but then I ended up eating with a spoon in the end. 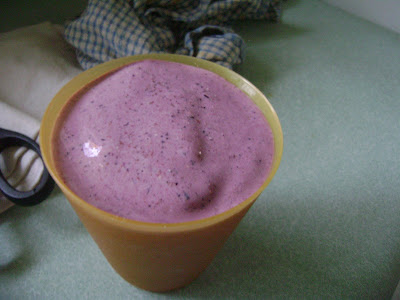 Brain freeze aside, eating a big bowl of ice cream for breakfast did make me very cold on a few occasions - it must have cooled my core down, or something. This was good on the mornings when I rode in to uni, but on a Saturday morning I had to dive back under the doona to warm up - when it was 32 degrees outside.

Getting 2-4 serves of fruit, the odd serve of vegetable, a serve of rolled oats, and most mornings some almond meal and/or flax seeds is a pretty good start to the day, I think.

So, what am I missing? I readily admit that I am still a smoothie novice, so give me your favourite smoothie tips! 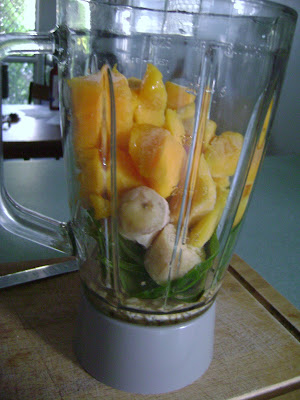 Email ThisBlogThis!Share to TwitterShare to FacebookShare to Pinterest
Posted by Theresa at 17:15

I like them watery, so melon, mint, lemon, honey and water does it for me. Or just watermelon and mint. Divine.

I've been having the occassional smoothie for breakfast as well! I found these 'smoothie cubes' in the frozen section of the grocery store that are nice. I add stuff from there, but they are nice to have in the freezer in case I'm low on other ingredients.

I love your idea of adding soaked oats and can see how that would be extra filling!

You've gone smoothie crazy! :-) They all look delicious. And I agree with Emma, avocado makes for one creamy, mind-blowing smoothie.

Gosh you are so creative with your smoothies! I'm ashamed that I eat exactly the same one every morning. Apparently silken tofu works in a smoothie espcially if you need a protein hit, but I've been too nervous to try it cos tofu in a smoothie is a weird concept! i'm going to try spinach and pineapple though :)

Your smoothies look fantastic and very creative, my regular one seems quite boring in comparison. I do prefer a thinner texture to yours as I like to sip mine from a glass. I've been meaning to throw some spinach in one day but I can't quite make myself do it.

Those smoothies look good. I sometimes put a spoonful of tahini in my smoothies (I was surprised how good it is in them). I often put in some flax seed or chia seeds too.

The meaning of this is that you literally burn fat by eating coconut fats (in addition to coconut milk, coconut cream and coconut oil).

These 3 researches from big medicinal journals are sure to turn the traditional nutrition world upside down!