That's winnie the pooh for "ta-ta for now".

Catch ya'll on the flip-side (ie. December) with heaps of piccies and stories.
Email ThisBlogThis!Share to TwitterShare to FacebookShare to Pinterest
Posted by Theresa at 14:58 0 comments

My sister just had a baby. By just, I mean at 3:40 am on the 5th of October. It's a little weird, being halway around the world and trying to figure out the time difference and that. They named him Paxton. I'm not sure if there is a middle name, I only talked to my slightly-clueless brother for a few minutes.

Unfortunately, I really don't like the idea of babies. Which has made it hard to feign enthusiasm ever since I found out she was preggers. She doesn't like my jokes about post-natal abortion, I don't like hearing about how the kid kept moving on her bladder and making her have to pee. That stuff grosses me out. I'm glad that she and her hubby are happy and all, but I keep finding myself referring to the baby as "it" rather than "him", so I am glad that I heard from my brother and not my sister. I would have tried not to laugh when I heard the name Paxton, but I don't know if I could squeal and say "that is so adorable" the way she would want.

On the bright side, now that my parents have a grandchild they have nothing to expect from me :-D
Email ThisBlogThis!Share to TwitterShare to FacebookShare to Pinterest
Posted by Theresa at 13:48 2 comments

Until you leave home and start fending for yourself--not in dorms, but really go off on your own--you don't realize how many little things you take for granted. I don't mean little things like having mom do your laundry or make you dinner. I've been washing my own clothes since grade 7 and cooking for myself since I went vego in 2003. The little things I mean are peelers, graters, juicers, potato mashers... kitchen stuff! Our kitchen at home was by no means well-equipped, but we had enough stuff that you could improvise for whatever you needed. I never really had to think too critically about how to do something in the kitchen, or analyze a recipe for it's doable-ness with my supplies.

When I moved to Oz, however, I realized quickly how many things you miss. Andy and I realized ahead of time that we would need to buy plates, cups, cutlery, and pots and pans. But we didn't anticipate veggie peelers, can openers, rolling pins, baking dishes, etc. When we moved into our house (we had it to ourselves for the first two weeks), we bought a few of those supplies, enough to get by. And the owner of the house had put a few things in, like pots, a chopping board, plastic spoons and spatulas, and a microwave. Then other housemates moved in and brought a few things of their own, like wooden spoons, a blender (and about 12 bajillion other gadgets that never get used, like veggie steamers, 3 rice cookers--3!--sandwich grillers.....), and a mixing bowl.

We were still lacking a few things, so although we're broke (I can't work and Andy is a full-time student) we've been slowly stocking up. We saw a sale on Pyrex baking dishes, so we have two rectangle pans and a pie plate. We have plans to buy other things, but since we're leaving so soon it doesn't make much sense to buy them and promptly pack them up. So a good wok, a food processor... they'll all have to wait. We still improvise quite a bit, for example I use a tea cup as my measuring cup, and dinner spoons for tablespoons. Measurements are never exactly precise; luckily this hasn't been a problem so far.

Unfortunately, the best stocked housemates started hating everyone else, and no longer want to share. They get the shits anytime we use their good non-stick frying pan, or their mortar and pestle, and they've hidden their wooden spoons and a few other things. I can still get by quite well, but I noticed it yesterday when I was making pierogies. They took away the rolling pin. How do you roll out dough to 1/8" without a rolling pin??! I had to use my measuring cup/tea cup, which was annoying because you can only roll halfway before the stupid handle gets in the way. I ended up rolling it, cutting it, and then rolling each little piece again. What a freaking hassle. Then I had to boil them in a pot that doesn't heat evenly, and fry them in a pan that sticks like you wouldn't believe.

The pierogies ended up tasting delicious (some were filled with sweet potato, and the rest had hokkaido pumpkin with curry powder), but I really, really wish I had excessive amounts of money for good cooking supplies. Anyone want to start a fund??
Email ThisBlogThis!Share to TwitterShare to FacebookShare to Pinterest
Posted by Theresa at 10:25 0 comments

On the road again...

Well, in the air again, really. In less than two weeks I'll be leaving tropical Australia for tropical Papua New Guinea. I've made mention of it a few times, but I don't think I've given any details.

Andy's honours project is on "The feeding behaviour of tubelip wrasse in Kimbe Bay, Papua New Guinea". Therefore, he gets to go to Kimbe Bay, Papua New Guinea. His supervisor is paying for it with some grant money, and part of the funding is for a research assistant. So, despite the fact that I barely know how to dive, and I know even less about marine biology, he's taking me. I will just be recording the number of bites taken by different fish on corals, and following them around to determine their territory size. More often, I think I'll be inputting data into the computer, and doing things like cooking nummy food when Andy is out diving (he reckons I'll get bored, so I don't have to go out every day if I don't want to). The trip goes from October 11 to December 10. Two months of hiding out in the jungle isn't everyone's cup of tea, but I think I'm going to love it. 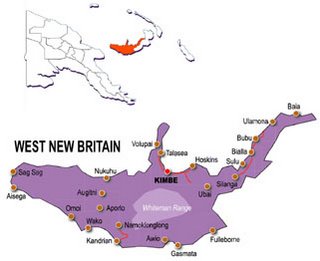 Kimbe is located on the north side of West New Britain Island, which is just off the main island of Papua. This map is from this website, which also has a lot to say about West New Britain in general, and Kimbe if you follow some links. This site is good, too. According to the websites and Andy, who spent two months there earlier this year, it is an amazing little town. Palm oil is the biggest industry, as well as dive tourism. About 40 minutes drive from the airport, we'll be staying at the Walindi Plantation Resort. Walindi is a dive resort, and the owner has set up a bit of a conservation centre/research station. James Cook University has its own accommodation within that research station, so we'll be staying there. The accommodation is a 3 bedroom house, and I think we have to share with another researcher for the first month, but after that we're on our own. It's pretty remote; phone calls are expensive and the very slow internet (at the resort, 1 km from the house) only works when it's sunny out. 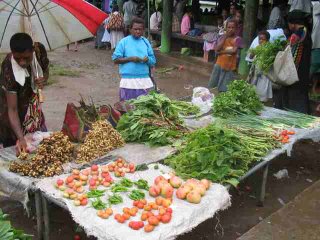 We'll be diving about 6 days a week over there. (Andy will be. We'll see how often I go out.) We get our own banana boat, with a local boat driver who knows where all the reefs are. When we're not watching fish eat coral, we can go to the markets (there will be so much fresh produce!), get a guide to take us to the top of a volcano, visit some hotsprings, or just lounge on the beach. We won't have much free time, because the days go from about 7 am to 5 pm, but hopefully we'll get to see a few of the local sights. It seems silly to go all the way there and not do anything besides dive.

Although, apparently the diving is some of the best in the world. Part of what makes it so good is its proximity to the shore. Rather than spending 4 hours on a boat, the way you do to get to the Great Barrier Reef, you're at amazing reefs in a short little 20 minute boat trip. There are volcanic caves, a steep drop-off, wrecks from WWII, and every other kind of diving possible on a reef, I think. We should be over there during the coral spawning, so we're hoping to get out for a night dive to see that. Andy says it's really cool, and it only happens once a year, so I'm keeping my fingers crossed.

So, even thought tubelip wrasse aren't the most colorful fish, it should be a good trip. I'm pretty sure I won't be blogging at all while I'm gone, but don't forget about me! I'll be sure to post a good update when I get back, with cool underwater photos and stuff. Plus, I'll be around for the next week.
Email ThisBlogThis!Share to TwitterShare to FacebookShare to Pinterest
Posted by Theresa at 11:52 1 comments