I think it is worth telling you all about our second day in Hong Kong in regular, chronological narrative form. It kind of demonstrates the kind of experience we had in a way that showing you a bunch of photos at once doesn't do.

We started by walking over to Whampoa, and catching the ferry to North Point.

We walked around that neighbourhood for a few minutes, just taking it all in, before catching the train to Causeway Bay to visit the library.

Because, you see, my iPod wasn't the most convenient in Hong Kong.  Our hotel had free internet.  That's internet, not wifi.  Doh.  But there was plenty of free wireless around Hong Kong - public parks, for example, all offered free government wifi.  But the other thing we didn't bring was an adaptor, so I could only charge my iPod through a USB.  So to the library we went, to charge iPods, email parents, and check up on students.

We got a teensy bit lost finding the train station to head further in towards Central.  But, when we got off the train, we had no trouble finding Hong Kong Park.  We saw a vegetarian tea house, and I got a little excited, but it wasn't yet open.  Instead, we went straight to our intended destination - the Flagstaff Teaware Museum.  This is an old colonial building that now houses exhibitions dedicated to all things tea.

When we finished looking at interesting tea pots (and I began longing for an elephant-shaped tea pot for our kitchen), we went back to the tea house.  But, it was booked out - and a good thing, because I think we would have been underdressed.  It looked like a popular destination for Ladies Who Lunch.  Instead, we ordered a turnip cake and fried mushroom dumplings and ate them next to a pond in the park.

We caught the Peak Tram up Victoria Peak, the big mountain that Hong Kong city crowds around.  The tram was steep and messed with our perceptions of the buildings.

At the top, we walked around a little, but were a bit overwhelmed.  At this point we were hot, and tired, and had been deposited by the tram into a massive shopping mall (as we came to realise is the case at basically every train stop).

The view was stunning, but our legs and feet were tired so we kind of didn't appreciate it as much as we should have.

But we did pose for some self-timer photos.

We got the tram back down the hill.

And then tried to locate a few of the veggie restaurants I had identified using my fail-proof google maps strategy.  The strategy was this -- I printed off a google map of each section of the city we were likely to visit.  On these maps were marked all the vegetarian restaurants (that are listed on google, I guess) in that neighbourhood, with the little marker on the map, and the list with the name of the restaurant and the address.  This seemed to me like a good idea before we left.  But in practice, the maps weren't zoomed in far enough to navigate very successfully.  And the addresses on the list were often written in Chinese characters.  Der.  So my failproof method resulted in lots of walking around, completely clueless as to where we needed to be.  So on this day, it was probably 1 or 1.30 when we started looking for lunch.  We were heading to the nearest restaurant on the little google map first.  But we got to the end of that street and hadn't passed it.  So we headed towards The Centre, an impressive building which, according to our google map, had a veggie place really close by.

At this point, it was probably 2.00 or so, and we were tired and hungry.  We weren't even taking in the sights as we walked around, because we were cranky and a bit miserable.  We retraced our steps, we scrutinised the maps, we figured out that it had to be down this little alley-way... but when we got there, we saw only one tiny hole-in-the-wall with no English language anywhere.  It may have been the one, but we weren't brave enough to try it out.  But, we had been walking for at least an hour, probably closer to two.  So we were tiiiiired.  So when we saw a sign for foot massage upstairs, and made a beeline straight for it.  Let me tell you, that was the best decision we made on the whole trip.  An hour of watching Shanghai Knights and drinking cold water in an air conditioned room while people rubbed our tired, sore legs and feet was exactly what we needed.  Even though it delayed our meal even further, comfort beat out hunger on that afternoon.

Feeling a bit refreshed, we realised we were close enough to a third restaurant to try and locate it.  At this point we were all the way up in Sheung Wan, which is a fair walk (or maybe it's not and my memory is deceiving me!).  We located the corner it had to be near, and we walked back and forth a few times and then... Andy spotted a green "Vegetarian Food" sign! Success!  I have never been so relieved to sit down and have a menu placed in front of me.  The restaurant we had found was Po Lin Yuen Restaurant in Shueng Wan.  It was 4pm, and there was almost no one else there, so service was prompt.  It wasn't gourmet, or particularly healthy, but like the foot massage, it was exactly what we needed.

We had salt and pepper tofu, deep fried with a silky-smooth inside. 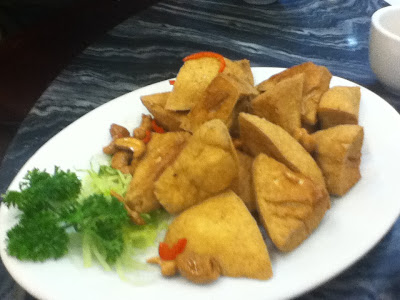 We got some sweet and sour veggie pork, which was crunchy mock meat nuggets coated in a sticky, sweet sauce, with yummy fresh pineapple chunks. 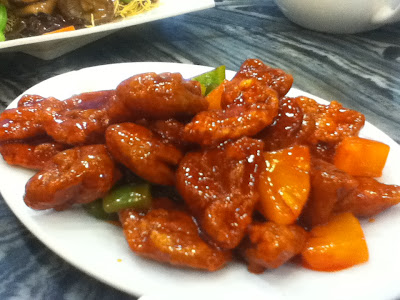 And we healthified it slightly with Buddha's Delight, a dizzying array of mushrooms with veggies and crunchy noodles. 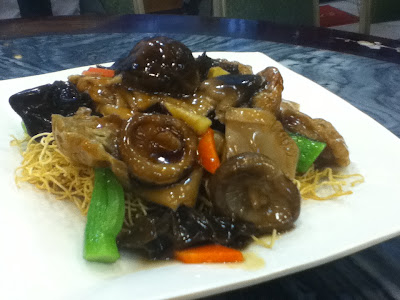 After that, we realised how close we were to the Macau ferry terminal, and walked along the harbourside back to Central Pier, where we watched the sun set.

Then we caught the ferry back to Tsim Sha Tsui to watch the light show, which was less impressive than the number of people who gathered to see it.

We didn't get back to our hotel until after 9pm, and we were stuffed.  It was a big day, with lots of walking, sweating, getting lost, being hungry, and grouching at each other.  Luckily the rest of our days weren't like this, otherwise my overall opinion of Hong Kong would be very different!

This is the last of my Hong Kong-specific posts, up next is Switzerland...
Email ThisBlogThis!Share to TwitterShare to FacebookShare to Pinterest
Posted by Theresa at 18:02

That sweet and sour 'pork' sounds impressive! I love the tram too, I'm big on novel transport forms when on holiday :)

Have loved your hong kong posts, brought back so memories. By the way. I used to live in causeway bay!!!!

that great working so advent thought