Aside from mangoes, one of the food that makes me the happiest is avocado. And, yay for me, avocado season is here again. Avo season is one of those that varies every year, so I still haven't gotten my head around when to expect cheap, buttery green orbs in the markets. But here they are, and the ones on the cheap now are Shepherd Avocadoes--my favourite variety. We got a bag of five biggies from the market for $2.50. 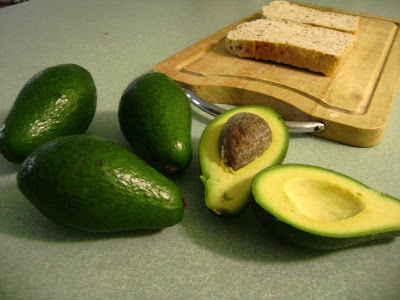 Naturally, we've been eating them with abandon. On sandwiches, cut up on the side of lunch, and mashed up with salad and beans for burritoes. 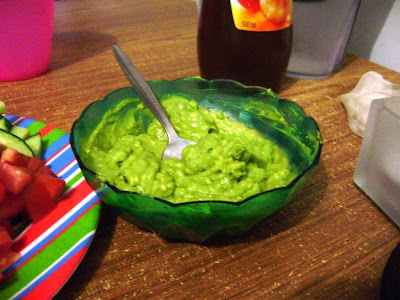 Aside from avocadoes, other meals have been making my mouth happy lately. Like these Bombay Rock Potatoes and Chickpeas, deliciously spiced and coated in tomatoey sauce. 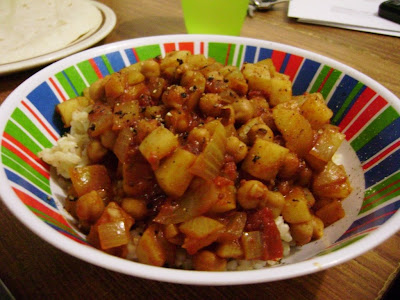 Other happy food is pretty much anything that can be on the table minutes after we think to make it, and that tastes good. Last week when I made steamed dumplings, we froze half before cooking them. So when we were feeling hungry but lazy a few days ago, we pulled them out of the freezer, steamed them up and filled up on the yummy spicy-sweet BBQ tofu filling. 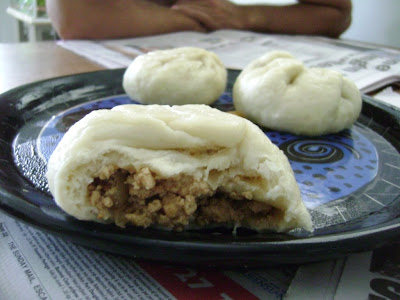 Aside from food, the other things that make me happy lately include submitting papers to conferences and journals, finding a cute winter jacket for $8 from the second hand shop, and drinking herbal tea. Oh what? You're wondering why I need a winter jacket when I live in the tropics? Well, I'm going to Manchester, England in April for a conference. I'll also be getting to Conwy (Wales) and Liverpool--so if any of you have any good suggestions on where to find veg food in any of those places, please let me know. 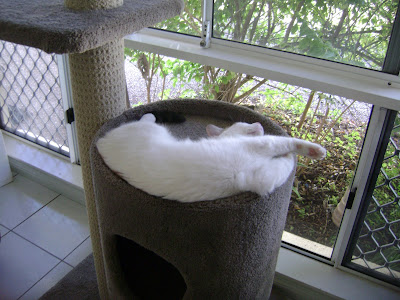 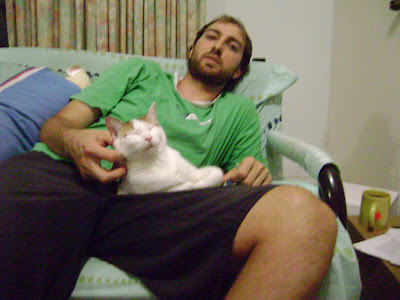 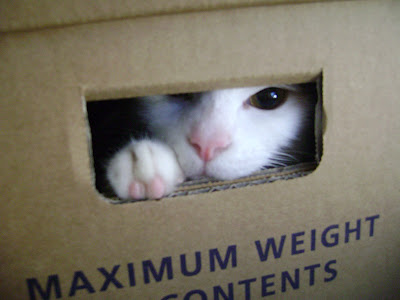 Email ThisBlogThis!Share to TwitterShare to FacebookShare to Pinterest
Posted by Theresa at 12:34 23 comments

Although the Australian calendar keeps track summer, autumn, winter and spring, those distinctions are not terribly useful up here in the tropics. The important seasons are not marked on the calendars—mostly because they change wildly from year to year. Right now, we are well into cyclone season. Cyclone Ellie, five weeks ago, dropped lots of rain on us and left some nearby towns under water. Our most recent visitor was Cyclone Hamish. He formed on Friday morning and there were serious concerns that he would cross the NQ coast. But he’s kept a respectful distance, staying just off the coast.

His maximum intensity (so far) has been category five—similar to Hurricane Katrina. Hamish was expected to pass Townsville on Saturday evening, so the whole day was a bit tense. We woke up to beautiful, cheery blue skies. 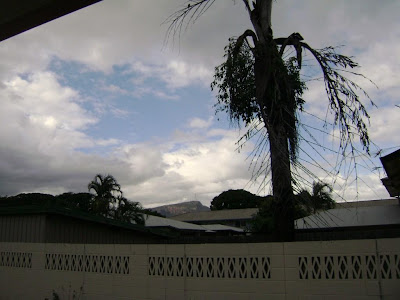 But all morning, the skies went back and forth between that, and this: 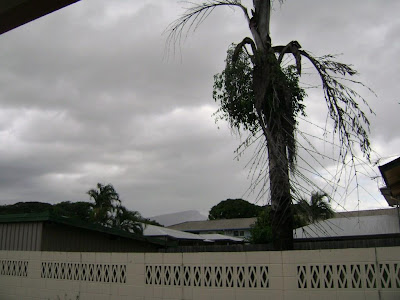 Look at in the distance—it appeared and disappeared every ten or so minutes for the whole morning. We got some rain around , but it cleared up pretty quickly. Hamish passed without note, and now he’s much further down the coast and dropping in intensity. Of course, cyclones are unpredictable and anything could happen. And cyclone season isn’t over until April/May, and the Bureau of Meteorology is expecting at least one more to form before then—so we may get some more excitement yet.

While anticipated Hamish’s arrival, we cooked. As you do. For dinner one night, I baked some portabella mushrooms which had been marinated in orange juice and jerk seasoning. Since we like to fill up our oven, I also threw together some sweet and plain potato chippies. Andy stuffed a few ugly tomatoes with leftover tofu scramble, and we heated up a leftover stuffed sweet potato. A bit of lime-garlic aioli made the meal complete. 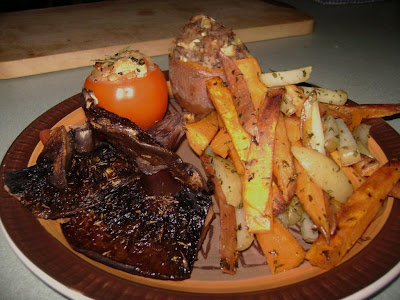 On Saturday, after a relaxing day (despite the cyclone potential) at the vegan spa with some friends, we made yum cha. I made some steamed dumplings, using the dough recipe from the last VegNews magazine. I filled them up with some BBQ tofu filling. 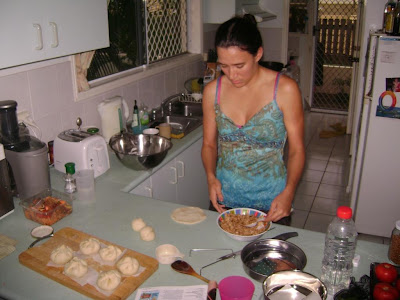 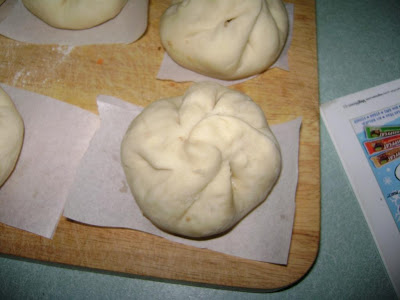 I'm not so great at closing the dumplings.

We also made dim sim, using store bought dumpling wrappers and stuffed with a tofu-veggie mixture before being fried. Unfortunately the camera batteries died, so I don’t have any photos of the finished products.

Even though it’s technically autumn, it's still the hot season--the end of the wet, when it's still humid and could rain at any time, but the skies are mostly clear and the sun beams down. Yesterday felt like a particularly summery day as we biked home—hot, sunny, and still—so we had an appropriately summery meal. A few weeks ago I made a double batch of SusanV’s BBQ seitan ribz and froze half. We defrosted them and put them under the griller with some sauce and had a very quick main meal. To fill the plate, I made a salad out of millet, chickpeas, wakame and ninja vegan mayo (Praise 97% fat free). 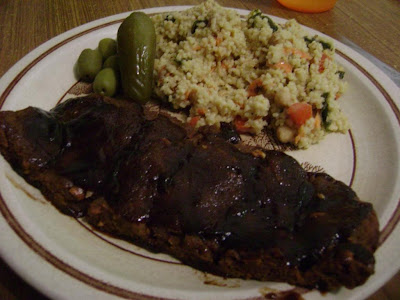 Who needs winter, spring, summer and fall when you've got The Dry, The Wet, cyclone season, mango season, stinger season and avocado season?

Email ThisBlogThis!Share to TwitterShare to FacebookShare to Pinterest
Posted by Theresa at 08:21 16 comments

Some of my favourite foods come from the oven—cookies, cakes, pies, roasted veggies.... But using the oven to bake just one thing isn’t very efficient. Preheating and maintaining the temperature in a fairly big airspace just for one pan of food uses a lot of electricity and isn’t good for the environment or the wallet. Not to mention, it makes the house all kinds of hot—this is a good thing in the winter, but not so much in the hotter months. And even though autumn officially started in on Saturday, it’s still pretty warm here.

None of this is enough to stop us from using the oven. We just try to be a bit smarter when we do heat it up. In our house, the oven is stuffed full whenever it is turned on. This usually takes some major strategery—which pans will we use that can fit together; which dish needs to be on which shelf; how long and at what temperature does each dish need to bake; when should batters be mixed and poured into pans...

Sunday, after eating pancakes and reading the paper, Andy and I had a long, drawn-out baking-fest. He was bored (I was doing the crossword) so I suggested he bake some cookies. He flipped through our newest cookbook acquisition, Joy of Vegan Baking, and decided to make both Lemon Bars and Jam-Filled Oat Bran Muffins. And since we had the oven on anyways, he declared, we should have something baked for dinner; his choice was the potato pizza from the latest issue of Vegan Voice magazine (which I didn’t get photos of). And then he requested that I be in charge of the Lemon Bars.

Andy started on the muffins in the early afternoon. Instead of oat bran, he ground up some rolled oats. He kept the wet ingredients separate, in the fridge, waiting for the oven to be preheated before mixing (since the baking powder activates as soon as it hits moisture).

After he had finished with the muffins, he boiled and mashed some potatoes and mixed up the pizza crust.

When he was done in the kitchen, I put together the shortbread crust of the Lemon Bars, pressed it into a slice pan, and put it in the fridge. Then I blended up the topping in a bowl, using mango flavoured silken tofu (not noticeable over the lemony-ness) and custard powder in place of corn flour.

When it came time for dinner, we put our carefully worked-out strategies into action. Andy mixed his batter while the oven heated, then filled muffin cups with batter and jam. We topped the pizza crust, and baked the shortbread. The muffins came out looking delicious, the pizza was rolled out a little thin and fell apart while we ate, and the Lemon Bars took much longer to set than the recipe called for. But everything was really tasty, and now we’ve got treats to last us all week. 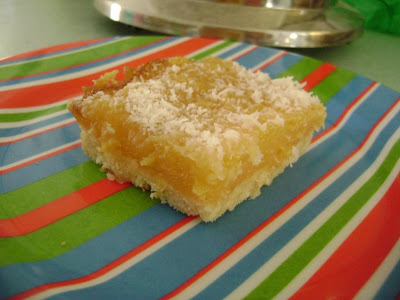 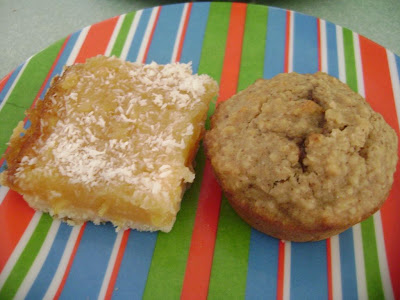 We had another oven meal last night to use up a few leftovers and old veggies. Last week I made an Ethiopian-spiced tofu and vegetable stew. We blended it up and stirred through some leftover barley. This was poured into a crust. The whole lot was topped off with a mixture of mashed potato, sweet potato, garlic, miso and sunflower butter (for a cheesy flavour). I called it Ethiopian Goatherd’s Pie—because it’s not quite shepherd’s pie. 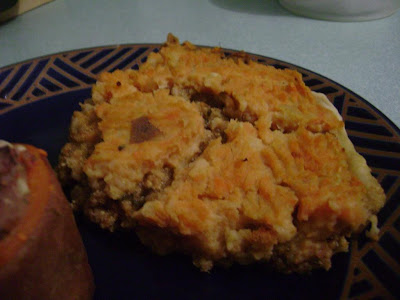 At the same time, Andy made some gourmet-style stuffed sweet potatoes. He steamed a few big chunks of sweet potato, and the hollowed out the insides. They were stuffed with a bread and corn mix flavoured with cranberry jelly and orange marmalade. This was a very yummy, Thanksgiving-flavoured side dish, and that stuffing is likely to make more appearances in our house. 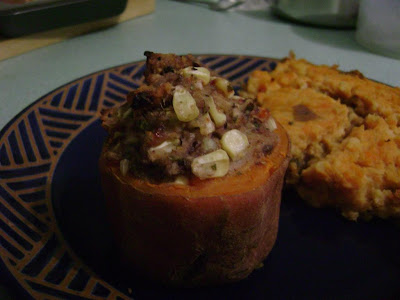 And finally, because Vaala asked after my last post, I’ll share with you my recipe for pastry crust. It’s a mix of recipes and techniques from Hot Damn and Hell Yeah, Wild Morsels, and my mum. This is enough to make one standard sized crust, or six topless mini-crusts. If you need a top, double the recipe.

--Combine flour and salt in a medium bowl. Cut in margarine with a pastry cutter or your fingers, until the mixture resembles bread crumbs. Add ice water and mix well, kneading slightly to incorporate all the flour. Form into a ball (or six small balls, for cupcake-sized pies) and chill for 30 minutes. Roll out between two sheets of cling wrap to desired size. The cling wrap keeps it from drying out the way a floured surface does. When you transfer the crust to your pan, peel off the top piece of cling wrap and flip the crust into your pan, and use the other cling wrap to press it in to place. Fill with something yummy, bake and enjoy.

Email ThisBlogThis!Share to TwitterShare to FacebookShare to Pinterest
Posted by Theresa at 08:40 19 comments

Labels: dessert, ethiopian, Hot damn and hell yeah, muffins, the joy of vegan baking, vegetables, Wild Morsels
Newer Posts Older Posts Home
Subscribe to: Posts (Atom)
“The animals of the world exist for their own reasons. They were not made for humans any more than black people were made for white, or women created for men.”