Late to the party is a good way to describe me and food trends. Is harissa still even trendy, or has the hot sauce of the moment shifted to piripiri, sriracha, or something else?

We had a lot of chillies in the last two or so months. The ziplock bag in the freezer was full, so I started threading them on to string to dry out. 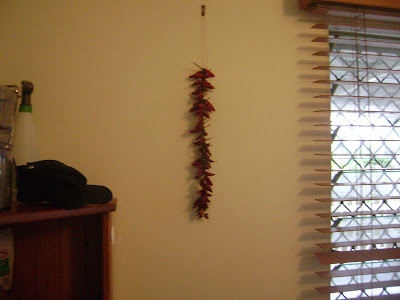 When the string got full and the chillies kept coming, Andy and I decided we needed to make some chilli sauce. A few of my cookbooks had recipes, but I can't go past Dynise Balcavage's recipes. Urban Vegan has a harissa recipe with aniseed, so I made a batch of that. And I fell in love. So did Andy. The jar is almost empty in the fridge, so I'll have to make a new batch soon.

I have used it to spice up some pasta with tahini sauce, kale, zucchini and tomatoes. 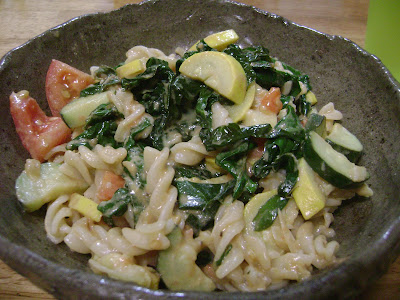 Kari came to the harissa party late with me, and posted this recipe using harissa powder. I made some small changes to suit what we had - and also, because I mostly remembered the recipe and didn't feel like looking it up. Chickpeas and sweet potatoes got smashed together with harissa paste and other veggies, and fresh coriander. 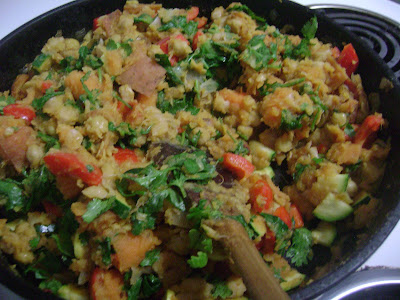 For dinner we ate it hot in wraps, and the leftovers were really great the next day in salad. 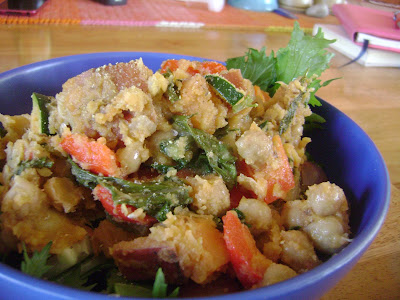 Finally, harissa butter made a delicious base for a kale pizza. Spicy, hearty with the kale, and accompanied by a less spicy, garlic&rocket&cherry tomato pizza. 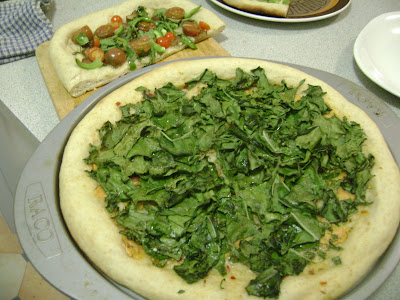 Even though I'm late, the harissa party is still hot and happening, so, better late than never!
Email ThisBlogThis!Share to TwitterShare to FacebookShare to Pinterest
Posted by Theresa at 11:24 4 comments

Update: I waited for three weeks after we got Marley to post this, because I thought after that time they were pretty settled. They were still getting along, so I expected they always would. But in the last week, Tika started to get a little fed up with Marley, and it culminated in some fairly vicious fighting on Saturday afternoon. Unfortunately, we have had to return Marley to her original people, and they are looking for a new home for her. We are very sad about it, but it wasn't fair to Marley to live in a house where she needed to be careful not to upset Tika, and we didn't want to put Nacho through a fighting-house either. We tried our best to help them get over it, but the best decision we could make was to be a one-dog household again.

I watched that movie on a plane to England, while I was sick, and sitting next to a stranger. I cried an awful lot, and probably made the poor guy next door feel all kinds of awkward. But this isn't a post about a dog movie, it's a post about a dog. Our new dog! 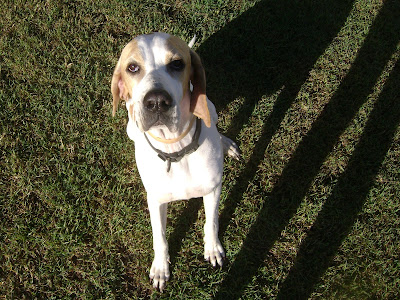 She was being given away on Gumtree, Australia's equivalent of Craig's List. Andy surprised me when he asked if we should get another dog. I was super keen, and we both thought that Tika, a very sociable dog, would benefit from having a constant playmate. We contacted her people, who were reluctantly rehoming her because they have kids and other dogs and horses and work, and didn't have the time that Marley needed (and she didn't get along heaps well with another of their dogs).

Marley is five years old, which is probably the same age as Tika. She is also about the same weight as Tika, though a touch taller - perfect playing size. 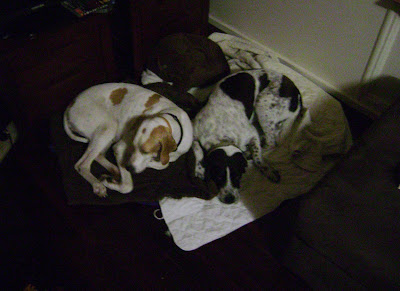 She is an English Pointer - with a pedigree and everything - and she is a gentle, sweet-natured girl. We joke that Marley is a genteel english rose compared to Tika's ocker Australian - Marley's head and face are delicate and slender while Tika has a hippo-style blockhead (which we love!). Tika is happy-go-lucky and Marley is a touch whingier and more emotionally needy. But they really suit each other, and I think we'll see Marley settle in and boganise more soon.
She came with the name, which we're sticking with. For a while, Andy couldn't remember it - he called her Mallory a few times. I think he was willfully forgetting, because he didn't want a dog named after a movie. Then I said "What about Bob Marley?"and all of a sudden it was okay. I also call her Marley-Barley, Marley-Moo, and Marls.

Marley and Tika get along like a house on fire (is that the right way to use that phrase??). They both play hard. 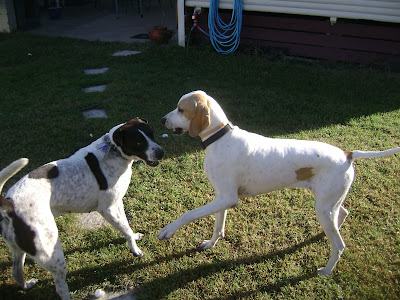 And then they crash at the end of the couch together at night. 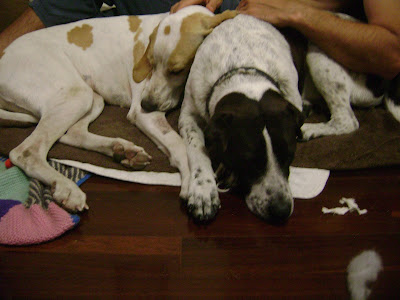 Marley is, ahem, not the brightest dog. She is very sweet, but when we try to teach her a trick like "shake" we are met with a vacant stare. (I wouldn't have known she was dumb, because she's a lot like the dogs I had growing up. But Tika is a super smarty pants, so it's glaring in comparison!) She is also easily amused, happy to spend a few hours chasing the shadows of butterflies and dragonflies.

Three of the four of us just love Marley. Nacho isn't sold on her just yet, but she still hasn't come around to Tika. There is a clear hierarchy in the house, and Nacho sits comfortably at the top, flicking her tail and throwing punches if any dogs piss her off. 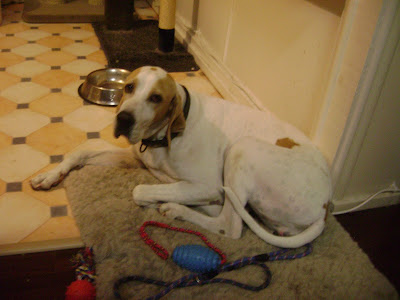 Email ThisBlogThis!Share to TwitterShare to FacebookShare to Pinterest
Posted by Theresa at 17:29 7 comments

In Australia, green bags are pretty ubiquitous. They have been since I was a study abroad student here, way back in 2004, and this was something I thought was very cool and progressive. I still do! I especially love getting green bags (which are often not green, but that's just what they're called) for free at events and things. Very handy. We keep some in the car, in case we forget to bring our main stash with us when we go shopping. We still get plastic bags sometimes, and actually have an embarrassingly large stash of them under the kitchen sink. We use them in our rubbish bin (which is actually just a bucket), but that only uses up one per week. What to do with the bulk of them is a bit of a mystery - I suppose we'll keep them under the sink until we get so good at remembering (enough) green bags that we never get plastics and we run out.

There are lots of other roads that plastic takes into our house, though. I was flicking through Facebook a fortnight or so ago when I saw an ad for Plastic-Free July. I made a pledge - avoid the top four single-use plastic items for the whole month. Drinking straws is easy - we never eat takeaways and thus avoid places where straws are provided. Plastic bottles is also fairly straightforward - in a regular month, we don't often go anywhere to purchase drinks. We drink tap water at home and at work, and if we do go out for an adventure we bring a stainless steel bottle of water with us. Coffee cup lids are a little trickier, mainly because getting them is so automatic. But, when I go for coffee (actually, chai) with people, we have in almost 100% of the time. So I can do this one easily if I avoid the two or three coffee places at JCU that serve only in takeaway cups. The final item in the top 4 is plastic bags. My overly-long intro to this post talks about grocery bags. But what about other plastic bags?

Produce bags are more common in our grocery- and market-trips than plastic shopping bags. Until May, we had been using them daily as Andy's sandwich bags. He would even bring them home to re-use if they were clean enough. And we use them every now and then in places where we might otherwise use cling wrap. But for Andy's birthday I got him a most excellent sandwich container - plastic! but re-usable - that is big enough to fit our homemade bread. So we began accumulating produce bags, too.

I was inspired by a link from Plastic-Free July to a tutorial on re-usable produce bags. I looked at it, got the gist, and then made them on a Saturday morning. I used a piece of mesh fabric - mosquito-net style - that we had laying around. I didn't really measure the fabric, but cut it into different sizes.  Working slowly, with plenty of interruptions, it took me about 3 hours to make about 8 bags. I think I'd be quicker next time, now that I know what I'm doing. 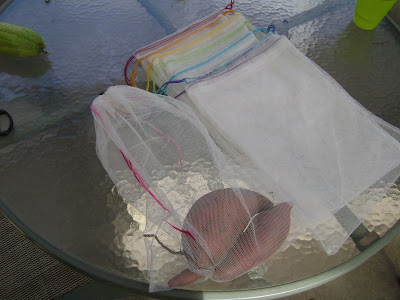 I used yarn instead of ribbons for drawstrings, and I love the rainbow I've got to shop with. 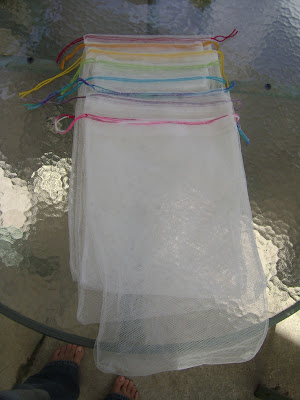 We tried them out with stuff from the garden, because Andy was skeptical - he thought they would be annoying.

But the next day we brought them to the markets. We couldn't use them for the first half of the markets. I was disappointed - first we bought things that we don't put in bags, like bananas, and there were heaps of stalls selling items pre-bagged. But in the second half of the market we got to use them, which was very exciting for me! (Simple pleasures?) 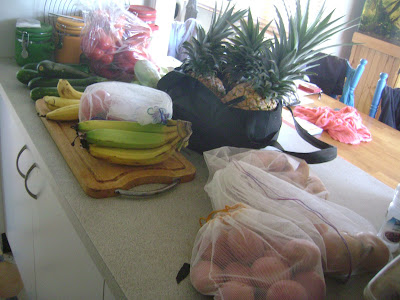 As I was making them, I thought about how multi-use these bags are. They are basically the same as a delicates bag that you might use in the washing machine. When I posted a picture of the bags on my Facebook page (have you liked it yet?) Cate and Melissa both talked about using them for toys and crayons and other things. Andy came up with a good use for them after our tomatoes were eaten by a mouse or rat.

In the two weeks since making them, we have put them to use several times. They store fairly small, so I can keep some in my bag, and they weigh about 10 grams each so they don't add much to the cost of produce. They were worth making with the free ingredients I had on hand, but I think I would even go out of my way to get more material.

Email ThisBlogThis!Share to TwitterShare to FacebookShare to Pinterest
Posted by Theresa at 14:07 6 comments

Labels: consumption, DIY, environment, garden
Newer Posts Older Posts Home
Subscribe to: Posts (Atom)
“The animals of the world exist for their own reasons. They were not made for humans any more than black people were made for white, or women created for men.”