Last weekend, Australian TV screened the last episode in the latest series of Doctor Who. Andy and I are relatively new Whovians, coming to the series in the last few episodes of David Tennant's period as the Doctor. We've since caught up on almost all the episodes that have made up the new incarnation of Doctor Who, thanks to ABC2's nightly Doctor Who episodes a few months ago. I am completely unfamiliar, though, with the older shows, unfortunately!

Of all the beings, friendly and otherwise, the Doctor encounters, the only ones that genuinely frighten me are the Weeping Angels:
So when I saw that last week's episode would be a Weeping Angel episode, I decided that there would be strength in numbers, and invited two of my Whovian friends over to watch with me.

We started before the show started with some veggie sausage rolls, filled with lentils, bulgur, TVP, and grated carrot. They were really yummy, and between the four of us, we ate this whole tray - Andy was the MVP in that game. 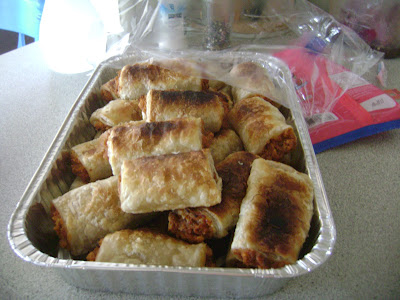 For dessert, we had some "jammie dodgers", which are reportedly the Doctor's favourite food, and also pretended to be a "Tardis remote self-destruct button" in one episode with the Daleks. These are actually Arnott's Raspberry Shortcakes, which are ninja vegan and which I'm pretty sure are the same thing as jammie dodgers. 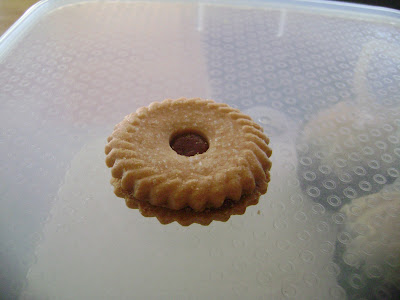 And I made Ood cupcakes! 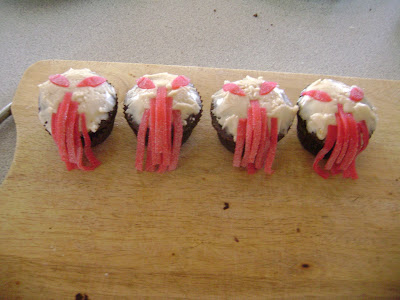 These are chocolate cupcakes, with peanut butter icing, and the Ood-ish features are made from cut up Extreme Sour Straps (which are also ninja vegan). 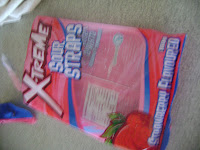 It was a good way to ease the tension of the Weeping Angels! But now Doctor Who is over for another series, and I've got to find something else to do with my Saturday evenings...

Email ThisBlogThis!Share to TwitterShare to FacebookShare to Pinterest
Posted by Theresa at 11:12

Those cupcakes are so awesome!!!
I grew up watching the Dr... totally worth the nightmares ;) & you came in at a good time, I think David Tennant was the best Dr.

Those cupcakes are way beyond Oodish, they are Ood to the max! Awesome.

Aaaaaahahaha!!!! The Ood cupcakes are so gooooood! I haven't yet watched the most recent season; I really struggled with the new Doctor. David Tennant is the only Time Lord of my heart!

BTW - if you're feeling like going back a bit, treat yourself start with the Christopher Eccleston series and carry on from there!

I never really got into Dr Who, but your culinary creations are really fun and creative interpretations of the characters!

Oh Theresa, this post has made me so excited :) I am going to email it to Mr B - he introduced me to Dr Who a few years back and has shown me some of the old episodes as well as all the new ones since I came on board (I agree - the weeping angels are terrifying!). We're a bit behind with this series but are working through them now and this food looks like perfect accompaniment :)

I love the Ood cupcakes and serving sausage rolls at a party is always a great idea!

Ahh, so fun! What adorable cupcakes! Yay Doctor Who. :D

Oh, I love your Ood Cupcakes!!! What a fun idea! The whole party looks like such a great time!

I'm doing a month of themed dinner parties on my blog, and I'm planning on devoting a day later in the month to Dr. Who. My husband and I love the show too. He's been watching since he was a boy, and I've watched the entirety of the new series (from Christopher Eccleston). I totally agree that the Weeping Angels are the scariest of all of the villains.