I seem to have an incredible backlog of photos on my computer, so today I present you a mix of dishes which have all been served up in my favourite blue ceramic bowl.  We've only got one, so it's a bit dicey when Andy is home, trying to decide who gets it.  But we've recently acquired a nice big white bowl which holds about twice as much food as a normal bowl, so that's the one Andy usually eats from now... 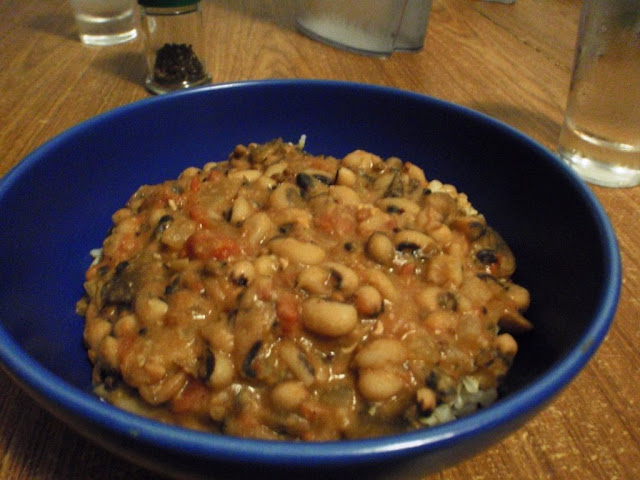 First up, black-eyed pea dhal.  This recipe is from Alternative Vegan and it is fantastic.  Smoky and deliciously spiced, it makes me declare my love for black-eyed peas. 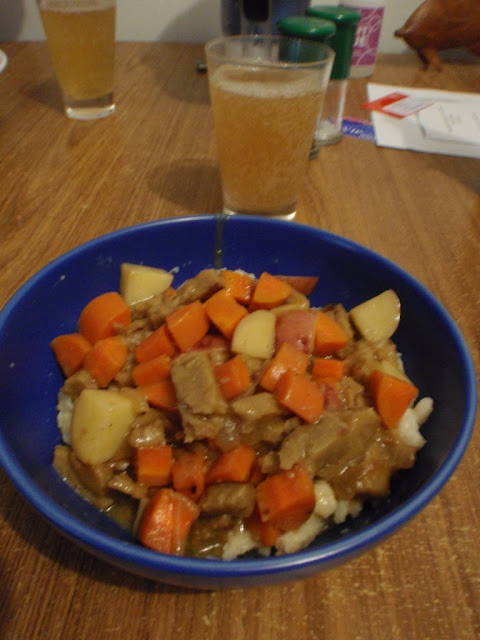 Here is a seitan-ginger beer stew which is a semi-original recipe.  Served with spaetzle and more ginger beer, this is a light and zingy flavour combined with a hearty dish.  Perfect for hungry summer dinners. 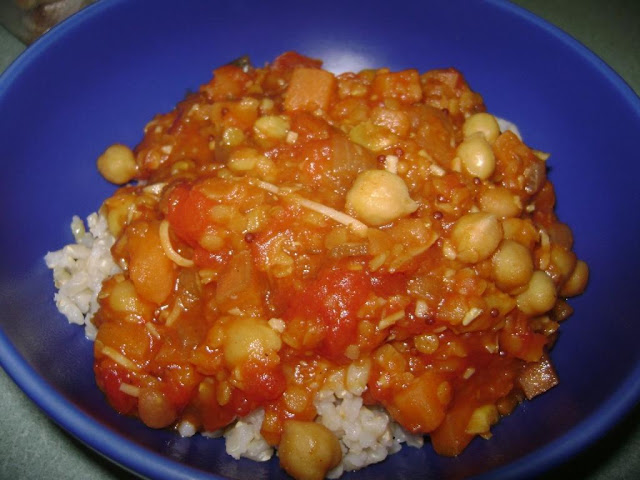 Look, I'll be honest about this -- I don't even remember what it is, or when we made it.  It appears to be some kind of red lentil and chickpea dhal, but I think I see shredded coconut in there as well.  Anyways, it was probably tasty.  With brown rice, because that's how we roll. 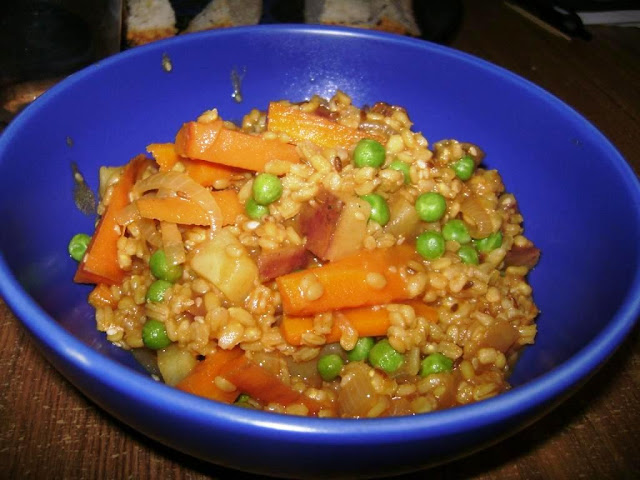 This is a barley bowl, kind of like a rice bowl that a lot of veggie restaurants have on their menus.  Sweet potato, carrot, and green peas plus a tomato-ey sauce to tie it all together.
Email ThisBlogThis!Share to TwitterShare to FacebookShare to Pinterest
Posted by Theresa at 12:09 6 comments

Andy and I have long been fans of pumpkin pasta, inspired by the recipe from La Dolce Vegan but one that we have spun so often that it rarely resembles the original.

Here it takes two new forms which were delicious and will be something we do again, when we've got plenty of time to play in the kitchen.

First, pumpkin lasagne.   The pumpkin-y sauce was full of spinach and seitan, all layered between yummy noodles and topped with a low-fat cream sauce.  (Served with a green salad and potato salad.) 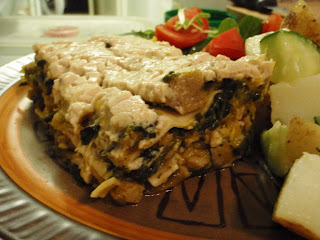 The leftover pumpkin mixture went into the freezer for a few weeks, because Andy had a plan for it.... Pumpkin Canneloni!  Basically the same filling and a very similar sauce, but this time in tube form instead of layered.  (Served with a salad, garlic bread and roasted brussels sprouts.) 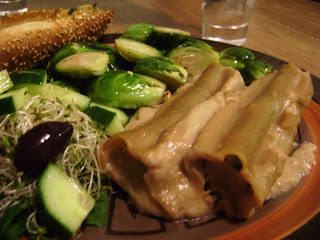 This was a delicious as the lasagne, but had it not been for the pre-made filling it would have been infinitely more time-consuming.
Email ThisBlogThis!Share to TwitterShare to FacebookShare to Pinterest
Posted by Theresa at 09:43 8 comments

In an effort to keep posting things, as well as to clear out a folder of food photos from a while ago, I present you with a random mish-mash of meals with minimal wordage from me. 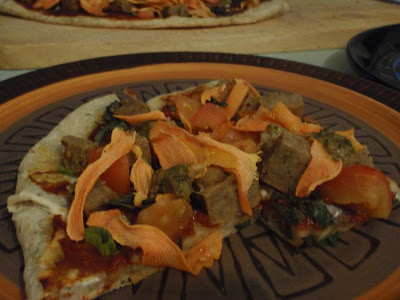 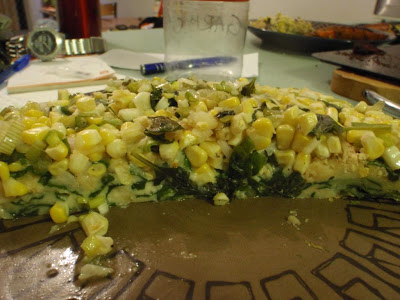 Fritter-tata cake.  Using the concept of our favourite fritters, we attempted a giant, frittata-like cake.  A base of corn, spring onions and tofetta was topped with a spinach-laden batter and baked before being flipped over to serve.  Kind of like a corn upside-down cake.  This didn't work as well as we had hoped -- the batter was too thick to run down into the veggies -- but it was still yummy. 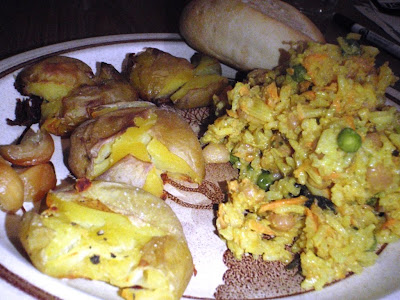 Smashed potatoes (boiled whole, then smashed and baked) with some kind of fried rice.  I have a vague memory that this is Thai-Style Pineapple Fried Rice from The Tropical Vegan, made with a fresh, beautiful pineapple.  This reminded me of my trip to Thailand and we both loved it. 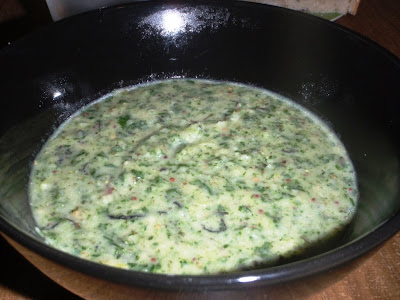 This is our variation on "Potato, Leek and Sea Vegetable Soup" from Vegan.  We didn't have a leek, so it's potato, onion and sea vegetable.  Also, we swapped Atlantic sea weed for a combination of nori and wakame, because that's what we had.  This was absolutely amazing.  Something in it combined to create this fantastically morish soup that we both thought was the bomb diggity.  Andy loved it, and he usually hates soup. 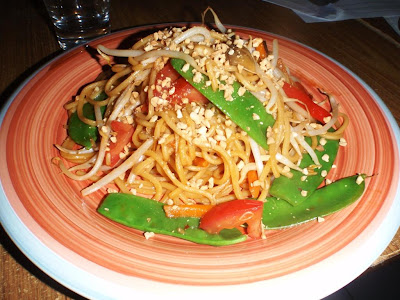 Upon finding bean sprouts and noodles reduced to clear, and capsicums and snow peas on special, we obviously had to make som Pad Thai.  We love "Brooklyn Pad Thai" from Vegan with a Vengeance with double the sauce and the addition of tomatoes (Vegan Planet style). 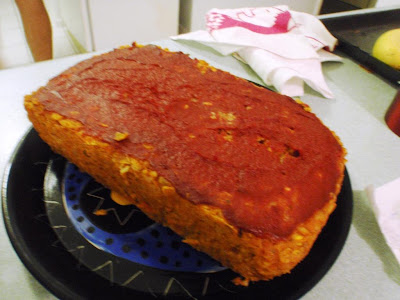 The best lentil loaf we've ever made.  Actually, Andy made this so I shouldn't take credit.  He roughly followed a recipe from Wild Morsels but mostly just winged it.  This had red lentils, brown rice, oats, a tin of baked beans, grated carrot, and some other things.  It held together beautifully, it was flavourful and the topping of tomato paste reminds me of my mum's cooking.

I shall return with more sporadic and disjointed posts soon...
Email ThisBlogThis!Share to TwitterShare to FacebookShare to Pinterest
Posted by Theresa at 12:31 6 comments

Oh, hi.  You might have noticed that my rate of posting, and commenting on other blogs, slowed (then again, you might not have, since I'm not at the centre of your universe).  That's because the semester started with a surprising kick.  I'm currently coordinating an online subject, teaching two in-person tutorials, and trying to finish* my thesis by the end of April.  Not to mention that Andy is preparing for another field trip, we're getting married in three months, and I've just started a mega-fun pottery class.  I love being busy, but unfortunately, blogging falls by the wayside because it isn't the highest on my list of priorities.  Not that I don't love reading all of your blogs, and I often feel a bit lonely when I'm not an active member of the blogiverse, but paid work comes first, I suppose.

Anyways, this is just a warning that I will probably be a bit scarce for the next few weeks.

To reminisce about easier days, this meal harkens back to a few weeks ago, when Andy and I were living the easy life, knocking off around 2 every afternoon and had plenty of time to think about things like marinating tofu.  This marinade is very dark, thanks to the dark soy, and earthy thanks to the tahini, and a little bit tart from sumac.  The result was beautiful to look at (I think) and reasonably delicious to boot.  And with some standard roasted veggies, it wasn't that unhealthy, either. 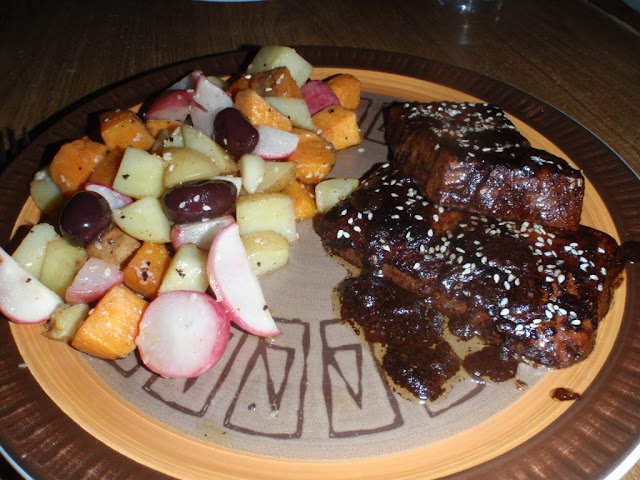 *By "finish", I mean complete draft in basically finalised form but with still formatting and possibly a bit of editing to do.  I won't be submitting until July.
Email ThisBlogThis!Share to TwitterShare to FacebookShare to Pinterest
Posted by Theresa at 13:30 11 comments

Andy and I are creatures of habit, and if we like something quite a lot we tend to re-create it.  Thus, we have had several meals recently which caused a bit of deja vu...

One night we endeavoured to make a version of baked beans similar to those served at Naked Espresso.  The obvious companions to baked beans, in our minds, were scrambled tofu and toast.  Hearty, tomatoey and slightly spicy beans accompanied by veggie-licious scrambled tofu and morish nuttelexed toast. 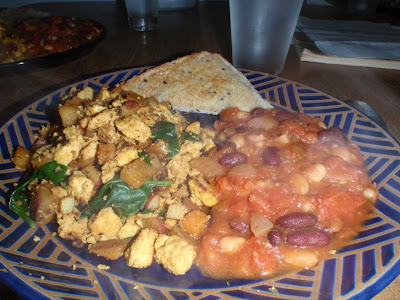 And the next week, we did the exact same thing, with black beans instead of cannelinis and slightly different veggies.  The result was equally delicious.

One uninspired afternoon while grocery shopping in Woolworth's we inspected a box of frozen vegetable spring rolls and found that they are vegan -- they've even got TVP inside.  So we got a box.  We also picked up a pack of sweet chilli tofu nuggets, reduced to clear.  And with some brown rice in the fridge, we made Japanese Rice Balls.  The result was a delicious plate of little snacks that left us feeling more than satisfied. 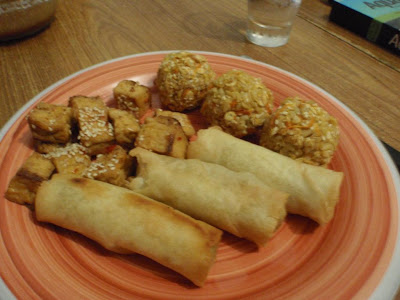 But we only used half the box of spring rolls, so obviously we would have another, similar dinner.

This time, with garlic bread-stuffed tomatoes and beetroot & sweet potato wedges.  Though the photo kind of suxors, the food itself was amazingly delicious. 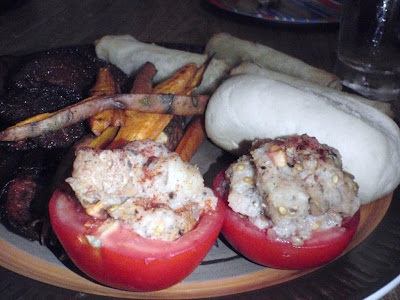 My only complaint with the spring rolls is they are bloody hot when they come out of the oven! I waited a good 10 minutes and still burnt my mouth.

Edited, because I'm a dweeb and posted the wrong photo.  Here is the one I originally posted, of the fu-scram.  Obviously this is gnocchi, garlic bread and corn fritters -- NOT tofu scramble.  This has been fixed! 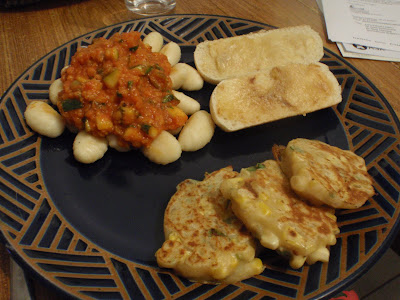 Email ThisBlogThis!Share to TwitterShare to FacebookShare to Pinterest
Posted by Theresa at 11:28 8 comments

Labels: asian-ish, beans, tofu, vegetables
Newer Posts Older Posts Home
Subscribe to: Posts (Atom)
“The animals of the world exist for their own reasons. They were not made for humans any more than black people were made for white, or women created for men.”