When I was a kid, prunes were synonymous with pooping - it was my Grandma's surefire remedy for constipation. "Pruuune juice" was always said with our noses scrunched up.

A few weeks ago after yoga class, we all went over to the teacher's house for breakfast. We had oats, and there was a little pack of prunes, so I had a few. And they were yum!

So I bought a pack. And then I saw a recipe in Celebrate Vegan for Seitan with Prunes, a Persian dish. I thought it sounded interesting, but we don't have any seitan and gluten flour is a bit of a hot commodity at the moment. So I made it with tofu instead. 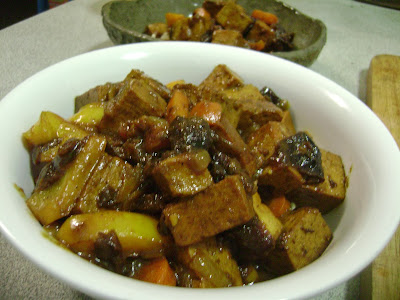 I also added some yellow capsicum, just because. And served it over rice. This was SO MUCH BETTER than I thought it would be. The tofu simmered away with the prunes, some spices, and a little bit of stock. As it simmered, the flavoured seeped into the tofu, the liquid thickened, and the prunes softened into a delicious goo.

So different to our usual meals, but so very good. I'll never scrunch up my nose over prunes again.
Email ThisBlogThis!Share to TwitterShare to FacebookShare to Pinterest
Posted by Theresa at 19:41 9 comments

Andy and I grow bananas, and so far we've had two plants with fruit on them. The first bunch of bananas took SO LONG before they were ready to pick - like 3 months or so. We cut off one hand at a time, rather than chopping down the whole bunch, so for 8 weeks or so we had fresh bananas from our back yard, rather than a glut all at once. 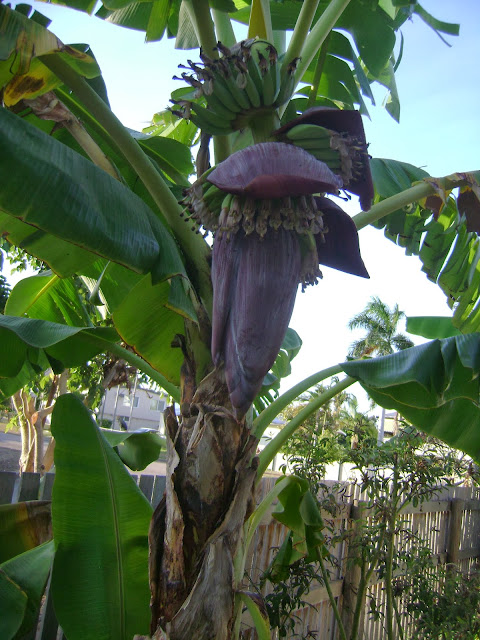 We have another bunch on a new plant, and it gave me a second opportunity to try eating the banana blossom. We did this with the first plant, but forgot to record anything about it. It's a weird looking part of the plant - a strange spear that looks nothing like a flower. The fruit forms underneath each petal, but after a while they stop producing. So we cut the flower off and eat it. 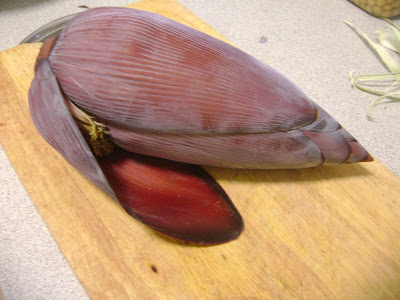 Start by peeling off the red petals. They are probably tough - I didn't actually try to eat them, but the whole internet says to get rid of them, and who am I to argue? 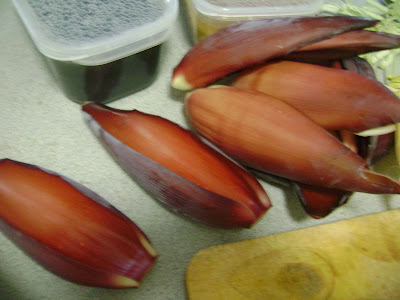 I tried to save two of these as fancy-pants serving bowls for our salad, but Andy tore them up and put them in the compost before I realised. 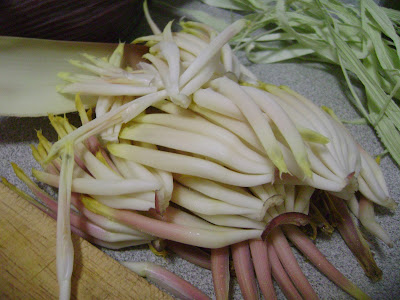 Underneath each petal are these little bunches of what would have become bananas (except that they don't, this far in - otherwise leave the flower in the tree!!). Supposedly you can eat these, if you separate out the stamen from the outer bit, but it sounds like a lot of work so we haven't tried yet. 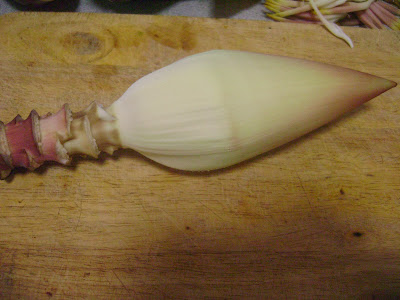 This white thing is the part we eat. If you don't have a banana plant on hand, supposedly you can substitute cabbage in its place. Shred this as you do for cabbage. 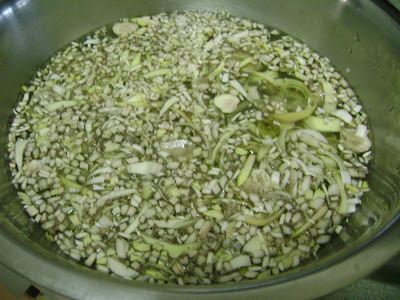 Immediately put the banana blossom shreds into a bowl of water with lime juice. This is meant to keep it from browning. Mine went sort of gray anyways - the colour of a banana peel that's been cut, actually. It's not the most appetising appearance, but when it's covered with dressing it's not so bad.

I found this recipe and planned to sort of follow it, and then didn't really. Ours was an Asian-inspired salad based entirely on what we had in the pantry, fridge and garden, and it turned out really nice. 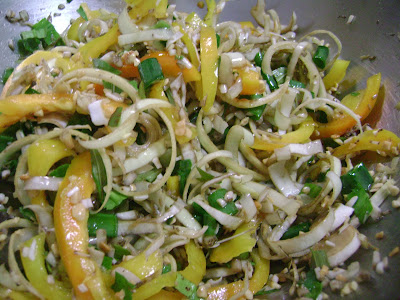 In a small bowl, whisk together the ingredients for the dressing. In a large bowl, toss together all the salad ingredients. Pour over the dressing and let it sit for 20 minutes (or longer) before you eat it. 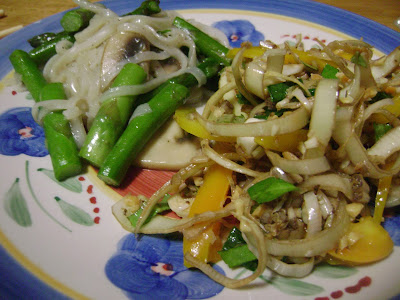 This salad mostly tastes like fresh Asian salad, because of the herbs and spring onions and so on. But the banana bud tastes a little bit like banana peel does, in a pleasant way. That isn't a great description, I know, but trust me. We served ours with some Vietnamese asparagus & mushrooms with rice noodles.

Email ThisBlogThis!Share to TwitterShare to FacebookShare to Pinterest
Posted by Theresa at 13:08 3 comments

Though I have basically ignored Andy's silly request that I avoid buying new cookbooks until I have tried *every* recipe in *every* cookbook we already have, I have been making an effort to try lots of new and exciting things. Because trying new things is good - it keeps us from getting in food ruts. And with a little bit of forward thinking, it isn't any more difficult than relying on old stand-by meals.

Here are a few new things we've been eating...


I have started ticking the recipes we have tried, and I am still woefully far away from getting even one entire cookbook under my belt. But nevermind - my copy of Asian Vegan Kitchen arrived yesterday so I have even more new recipes to try!

Email ThisBlogThis!Share to TwitterShare to FacebookShare to Pinterest
Posted by Theresa at 16:02 11 comments

Labels: beans, cake, dessert, okara, pasta, tofu, Urban Vegan, vegetables
Newer Posts Older Posts Home
Subscribe to: Posts (Atom)
“The animals of the world exist for their own reasons. They were not made for humans any more than black people were made for white, or women created for men.”