As I said in my Jervis Bay post, we've had a few busy weekends in a row. The weekend after we returned from the south coast we had many things on - it was my birthday, and it was also the weekend of the Travelling Film Festival in Townsville, and we had our usual garden / house stuff to do.

I saw 5 films with the Travelling Film Festival (Andy saw 2 with me). My favourite of the weekend was easily Searching for Sugar Man, a really intriguing documentary about a musician I'd never heard of before, but wish I had. He was big in South Africa (what the film is about) and Australia, but was a total flop in the US. The first half of the film is dark and broody, but for the second half I couldn't really stop smiling because it was just so... uplifting. I really recommend this movie.

My second favourite was Moonrise Kingdom, a Wes Anderson film. I love his other work, and this one was similarly story-book quirky and just charming.

Paul Kelly: Stories of Me was a really interesting film about Australia's most prolific singer-songwriter. It was a little disjointed - more a biography than a narrative about something interesting, in the way that Sugar Man is.

Lore, a story about the children of an SS Officer right at the end of WWII who have to travel across Germany, and end up travelling with a Jewish man leaving a concentration camp, was heavy and thought-provoking and interesting. It was no light film, but it was worthwhile.

Chinese Takeaway was really sweet - a comedic look at some serious subject matter, but I was taken aback by the way that many people in the audience laughed uproariously at bits that I thought were more sad than funny. That aside, the film was really gorgeous.

In between the films, I had a friend over for dinner on Saturday evening. Then on Sunday (my actual birthday) I had a couple of people over before we went to see Paul Kelly and Chinese Takeaway. Since the films started at 6.30pm, I thought some heartier food was in order. So I made a batch of focaccia, with tomatoes and basil and garlic on top. 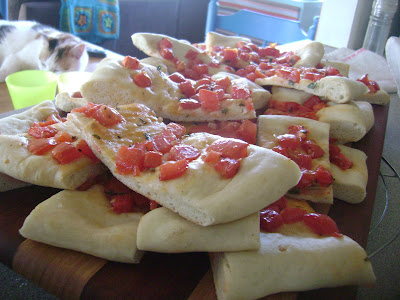 And of course some cake. Or rather, macadamia blondies. This is the recipe from Vegan with a Vengeance. 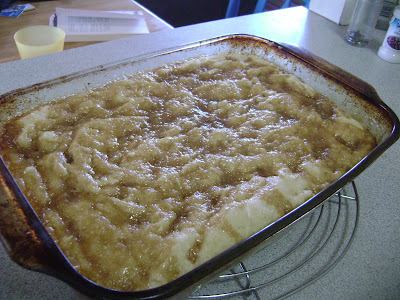 The recipe had a topping involving maple syrup and more macadamias, but I decided to go for a simple salted caramel topping instead. Baked on the blondies for the last 10 minutes, it was a little sticky-sweet without being overly messy. 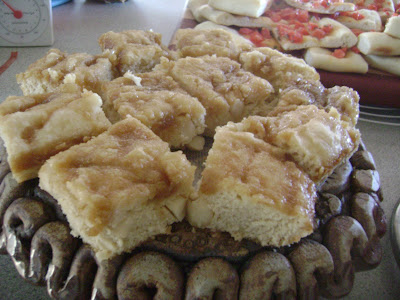 These, plus some mojitos, made a great Sunday afternoon with friends. So even though the weekend was busy, it was all fun stuff!
Email ThisBlogThis!Share to TwitterShare to FacebookShare to Pinterest
Posted by Theresa at 06:00 5 comments

Hi from Brisbane! I've just come back from the Green Edge with Amy, K & Toby, and Susan. But that's a story for another post. We've had a few crazy-busy weekends in a row. One of them involved a trip to the south coast for Andy's brother's wedding. Getting there was literally planes, trains and automobiles... we flew to Sydney, got (three) trains to Kiama, and then Andy's parents picked us up and drove us down to Huskisson, a very nice little town in Jervis Bay.
We stayed in Huski for two nights, and did a bit of sight-seeing around the area. It's a gorgeous place.

We went to nearby Hyam's Beach, which is apparently in the Guinness Book for having the whitest sand in the world. I don't know how it compares to, say, Whitehaven Beach in the Whitsundays, but a lot of my photos were over-exposed because it was so white.

On Thursday afternoon, we made a few salads - Andy's parents were in charge of food for the pre-wedding BBQ, so we helped out with a couscous & chickpea salad, and a pasta salad.

Then we went for a walk on the beach, where we found empty shark's egg shells...

And where Andy got really excited over seaweed - his area of expertise now in his new job. We collected some Ulva intestinalis to make fresh seaweed salad, but it was gritty so we didn't eat much of it.

We looked around in the tidal pools, screeching at the icy cold water.

On Friday we left Huskisson and went deep into Booderee National Park, which is actually not in NSW - it's a federal territory - to the cabins where the wedding was. We went for more walks on the beach - this time, not in Jervis Bay, but on the open ocean side. It was windy, and cold, but really beautiful.

The wedding on Saturday afternoon was just lovely. At the reception, there was a lolly bar (that's a candy bar in American-speak), which had plenty of vegan lollies. The vegan coconut ice was the hit of the night, but  the choc-PB cupcakes were good, as were the vegan marshmallows.

It was good to be catered for, but even better to see Andy's family, to be part of a beautiful wedding, and to get away from work for a few days!
Email ThisBlogThis!Share to TwitterShare to FacebookShare to Pinterest
Posted by Theresa at 16:46 4 comments

A few weeks ago, I received an email from Alina Niemi, creator of the new vegan ice cream book The New Scoop: Recipes for Dairy-Free, Vegan Ice Cream in Unusual Flavors (Plus Some Old Favorites). She: would I like a copy to review? Me: Uh, yeah.

Actually, the conversation was a bit more nuanced than that. She explained that, coming from Hawaii, her ice cream recipes include lots of weird tropical fruits - which of course I love! Her ice cream recipes also didn't require the cooking method that we usually employ - and anything to make ice cream easier is something I am willing to try. She sent a PDF, and as it is starting to hot up here, the timing was perfect.

We've only tried two of the recipes, because we don't eat ice cream very fast, but I have so many more recipes flagged to try. What I love about this recipe book (I keep wanting to call it a cook book, but that doesn't really work here since there is no cooking) is:


The first thing we tried was Pineapple Coconut Milk Ice Cream. Making it was much, much easier than cooking: just put pineapple, coconut milk, and sugar into a blender, then chill. 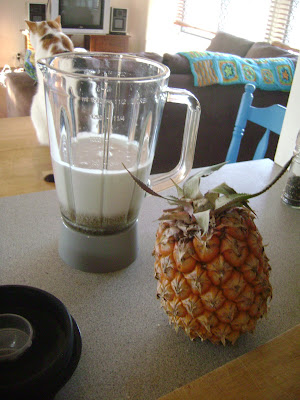 Then freeze. Then eat. It was so yummy, and so easy to make. My friend Belinda said it reminded her of the stuff she eats in Thailand. I thought the cooking was important to get the ice cream to be, you know, creamy... but this recipe totally proves me wrong. 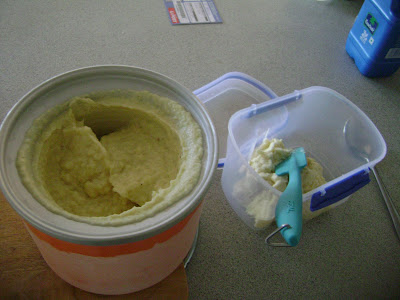 The other recipe we tried was a tofu-based ice cream recipe. Tofu, soy milk, sugar and coffee were blended up together and then chilled and frozen. This ice cream was less creamy than our usual - not bad, but more like the Sanitarium brand stuff you buy in the store here. It also freezes harder. It is delicious, but Andy and I both prefer the coconut milk varieties.

Basically, I prefer this ice cream book to the other one I have, Vegan Scoop. That one basically reproduces the same recipe with flavour variations throughout the book, which quite frankly I can work out for myself. We pretty much use that book for flavour inspiration. But The New Scoop suits us better because it uses actual fruit, flavours we love, and the recipes are a lot more varied.

Summer is coming up so quickly here in Australia, so I would recommend getting your hands on a copy of this book! Northern hemisphere folks, there are some holiday-ish ice cream recipes, like Spiced Pumpkin, so it's worth a look for you, too, even though it's a bit wintery!

Email ThisBlogThis!Share to TwitterShare to FacebookShare to Pinterest
Posted by Theresa at 09:23 10 comments

Happy World Vegan Month, everyone! Yesterday was World Vegan Day here in our timezone, and with a few extra vegans in Townsville we managed to organise an information table at the university. Stevie and Luc have written up a really great post about it over on the Team Earthling blog. You should really go read that, because it is insightful, it's got all the pretty pictures, and I don't have any of those things to offer at the moment! (Marking, and all that.)
Email ThisBlogThis!Share to TwitterShare to FacebookShare to Pinterest
Posted by Theresa at 11:30 3 comments