The Tropical Vegan, also known as Theresa, is a vegan in her late-20s who lives in Townsville, QLD. She teaches sociology and anthropology. She rides a bike for transport, exercise, and fun. She crochets, and occasionally embarks on other crafty adventures. She grew up in New York state, sort of close to Canada, and had never even been on a plane until she was 19 and on her way to Thailand. Since then, she's also been to Australia (obviously), Ethiopia, New Zealand, Papua New Guinea, England, Scotland, Wales, Ireland, Switzerland, Germany (sort of), and Hong Kong. She loves being in new places, eating good food, reading books, talking to interesting people, and doing things outside.

Theresa is married to Andy. Andy is a marine biologist who is very creative in the kitchen, has a big appetite, and hates wasting any food. Andy doesn't blog here (yet?), but he cooks a lot of the meals that are posted, he blog stalks, and every now and then he comments anonymously. He also reminds me to take photos of things for the blog, so he contributes in lots of ways. 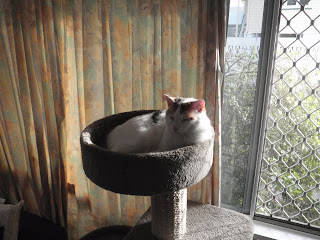 Theresa and Andy adopted Nacho in December 2007. Nacho is an adorable, grumpy, sweet, bossy cat who doesn't really like strangers or anything out of the ordinary in her space. In addition to cat food, Nacho loves to eat pumpkin (especially butternut), corn, green peas, oats, and nori. Nacho likes to spend time with her favourite blue mouse on a stick, she enjoys laying on top of important papers, especially if a human is trying to look at them/work on them, and she regularly walks on the keyboard of the laptop. 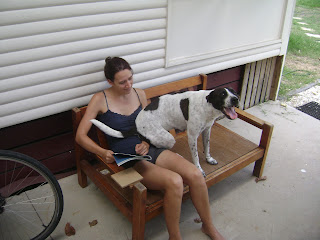 In May 2012 Tika joined the family. Tika is a super-sociable dog who loves to make friends with other dogs and other people. She chases balls and sticks but almost never brings them back. She discovered swimming in the summer and now wants to do it all the time. Tika eats just about every fruit and vegetable, apart from capsicum. She especially loves fruit like watermelon and pawpaw. She sleeps in funny positions, often on her back with her legs all over the place.
Email ThisBlogThis!Share to TwitterShare to FacebookShare to Pinterest

I really love your blog. I have been reading it for years and it has inspired me to start my own. I am an Aussie living in the UK, and every time you post, I hanker after my own country.

Home
Subscribe to: Posts (Atom)
“The animals of the world exist for their own reasons. They were not made for humans any more than black people were made for white, or women created for men.”