Here is another example of what DC has to offer. A few short blocks from the mall and the museums (and in fact, right outside the portrait museum) is a place called zpizza. I think they are a DC chain, because we also saw one in the burbs where we were staying.

Zpizza has a number of pre-determined pizza choices, as well as salads and sandwiches, and a build-your-own pizza. To do this you choose a crust, a toppings, and a cheese- and one of the choices is 'vegan'.

We opted for the Berkeley Vegan, with loads of veggies. The crust was crunchy, the veggies were plentiful, and the cheese (which we have previously found a bit rich) was a nice accompaniment without being overwhelming. And this generous lunch for two only set us back $19.25.

Score another one for DC. But now we're on a Greyhound travelling to upstate NY to visit family!
Email ThisBlogThis!Share to TwitterShare to FacebookShare to Pinterest
Posted by Theresa at 23:38 3 comments 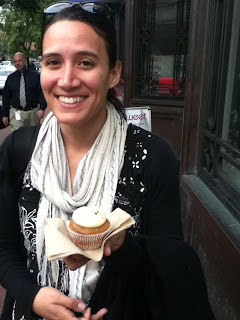 Hi from Washington, DC. This is easily one of the most vegan friendly cities we've been to, in the sense that so many non-vegan places have clearly labeled vegan options. Like this cupcake we found from Red Velvet Cupcakery, on 7th street.

They have two vegan cupcakes, the black velvet and the white velvet. I chose white velvet, which was soft and fluffy and vanilla-licious.
Email ThisBlogThis!Share to TwitterShare to FacebookShare to Pinterest
Posted by Theresa at 10:20 4 comments 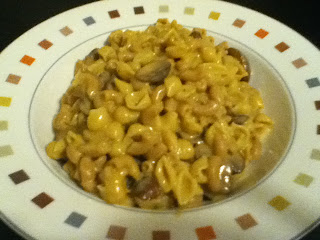 We've made it to NYC, after passing through Hong Kong, Switzerland, Scotland, and Ireland. And I promise there is more to come about all of those stops. But for now, look what I found on my (first ever) visit to Whole Foods on E Houston St - vegan Mac and cheese, in a box. We got some to cook in our apartment - shells as well as wholemeal elbows. We also cooked some baby portobellas and mixed them through. The result was easy, but a bit underwhelming. Not as delicious as the stuff we make at home, but hey! Vegan Mac and cheese! In a box!
Email ThisBlogThis!Share to TwitterShare to FacebookShare to Pinterest
Posted by Theresa at 21:26 6 comments