This product is by no means new, but Andy and I have baulked at the $7-ish price tag since they appeared on the shelves a few years ago.  We tend to pass by that area of the supermarket with barely a glance, because we would rather make our own seitan-related products than pay too much for them.  Especially because those Sanitarium roasts look teeny.

However, we love a good bargain.

Last week, Andy was in the shop and found them marked down 66%, to $2.37.  So he bought four.  Never mind that we had never tried them, and they might totally suck.  Even if they were terrible, we would find some use for them in the coming weeks (three went straight into the freezer). 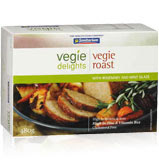 This photo comes from Sanitarium.
I had heard from others that the roasts were yum but for the rosemary mint glaze they come with.  I was a bit surprised to see that "glaze" really meant powder.  But, we decided that we would try the roast following package directions the first time, to properly judge it.  So we coated in oil, and then rolled in the funny orange powder.  Then we popped it in the oven with some potatoes, broccoli, and a stuffed tomato made by Andy. 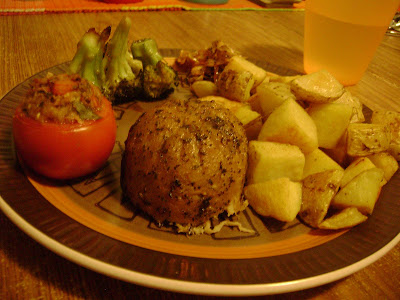 The results?  Meh.  First of all, the things I had heard about the glaze were true - it is not nice.  Andy, especially, hated it.  It was too sweet, and tasted very artificial.  So, for the remaining three roasts in our freezer, that orange powder will not be part of the meal. 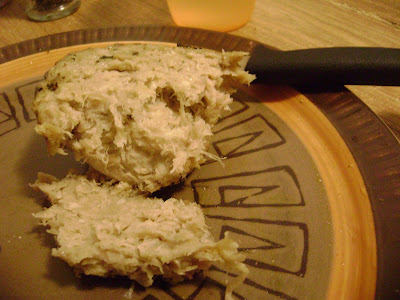 Second, the texture was a bit funny.  It reminded me of that highly processed log of 'chicken loaf' that my parents very occasionally bought from the deli for sandwiches.  It wasn't bad, and Andy kind of dug it, but it bothered me a little.  I kind of prefer single-textured seitan.  Maybe because it reminds me less of meat.  In my opinion, chicken-ish textures are good in small, thin doses -- vegan chicken nuggets or cutlets are okay, but a big log: not so much.

Finally, it was pretty puny.  It purports to be four serves.  I know that Andy and I are greedy gutses, but we ate the whole thing in one meal, with an awful lot of side dishes.  It wouldn't go very far in a 'family roast' setting. Andy ate two thirds of the whole roast in about 6 bites.

In summary, we think this product has potential.  With a different flavour, especially.  We might try slicing it up and frying, instead of roasting.  Or possibly marinating, and wrapping in yuba before roasting.  Andy's opinion is that if he saw those for 50% off, he would buy one, and for 66% off he would stockpile.  My opinion wasn't so favourable, but I didn't hate them.
Email ThisBlogThis!Share to TwitterShare to FacebookShare to Pinterest
Posted by Theresa at 19:17

I tried it when I first became vegan a couple of months ago. I HATED it!!
I thought it tasted just like the stuffing you would find in a chicken, and when I ate meat I hated that too.
I guess somebody must like them, otherwise they wouldn't be made anymore, I just don't know why.

My stepmum buys us one of those every year for Christmas dinner and that's pretty much the only time we eat it (mainly because of the price ticket!) but my only problem is the freakish meat texture but other than that it's good every once in a while, with a crap ton of gravy. We also didn't mind as a lamb type dealie with proper mint sauce :)

I kinda love how your ideas for making this palatable involve enough effort to negate the "convenience" factor of such a product! Teehee! And I'm now happy I haven't yet succumbed to the expensive price tag ofthis. I find Sanitarium generally pretty lacklustre, and while I went through a phase of craving the "tender fillets", was incredibly unimpressed to doscover they contain whey!!

I have never tried the vegie roast, but I must try it sometime.

I have a secret and shameful love for the Santitarium canned nutolene, which is kind of like what I imagine nut-based cat food would taste like... and yet I really really like it. I'm sure I'll go to vegan culinary hell for that alone! :)

I have bought this maybe twice, I think both times while Michael was away and I was cooking for one. On both occasions I enjoyed it most sliced up on sandwiches (I had a weakness for chicken and mayo sandwiches in my omni days!) - so I can definitely see where you're going with the lunch meat comparison.

I'd be very interested to see how it performed with a yuba coating, though as Hannah points out it kind of negates the convenience feature. :-D

I had it a couple of months ago when my non-veggie husband had a meat roast. My verdict - blah. The glaze was horrible too. Sure it's convenient but not worth it for the lack of taste and good texture.

(I recently stumbled across your blog and was delighted to discover another Australian food blog out there!)

I laughed at your partner buying this because it was on special - because I did the exact same thing a year or so ago (albeit with a smaller reduction than you found!). My reaction was pretty similar to yours, unfortunately. I do like some of the Sanitarium range, but this just didn't work for me.

Hmmm, I've never seen anything like that here. Sounds kind of weird to be honest! But I'd be a sucker for a bargain like that too. Slicing and frying sounds like a good option...you can't really go wrong there!

where can I buy the Vegie roast?? I absolutely love it! they removed it from the shelves at Wollies and haven't had any in a long time

I love the Vegie Roast too, Octavio! You can still get it at Coles. :)

I get it at my woolies but theyve now removed the glaze satchel, which, contrary to the commentary above, i am vonvinced makes it absolutely delicious. I obly stumbled on this post in search of a glaze recipe since i now have to make my own. Sob sob. I want my orange glaze back!

I get it at my woolies but theyve now removed the glaze satchel, which, contrary to the commentary above, i am vonvinced makes it absolutely delicious. I obly stumbled on this post in search of a glaze recipe since i now have to make my own. Sob sob. I want my orange glaze back!

I love this roast as well! I also found my way here in search of a glaze recipe. I eat one of these every month with roast vegetables. It's one of my favourite meals. I just wish they would bring the glaze back.