Summer in Townsville isn't really veggie-friendly.  Most stuff goes out of season, because it is too hot and wet for local crops.  The markets dwindle to things like sweet potatoes, pumpkins, sometimes zucchinis and eggplants.  This summer was worse than usual, thanks to most of Queensland being submerged in some floods and another good chunk of Queensland getting worked by Cyclone Yasi.  Instead of loads of fresh veggies over the summer, Andy and I had a lot of potatoes and not much else -- everything else was from far away, and expensive as a result.

But now that it's cold, we have been able to buy lots of veggies of all kinds, grown nearby and available very cheaply.  Instead of needing to rely on seitan-centric meals, we've returned to some pretty hardcore veggie-on-veggie meals.  (I realised only after I typed that sentence that it sounds really dirty.  But, I'm gonna let it stay.)  Here are some of the vege-ful meals we've been indulging in...

Beautiful roasted Brussels sprouts, with potatoes and carrots, and a side of baked beans. 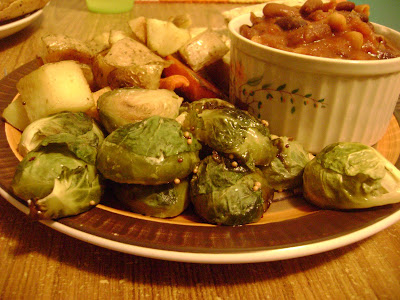 Peanut Curry Casserole, a variation on a recipe from Urban Vegan, full of broccoli, fresh tomato, and chickpeas.  On the side, a yummy salad with cos lettuce (also known as romaine), carrot, cucumber, avocado, sunflower seeds and more tomato. 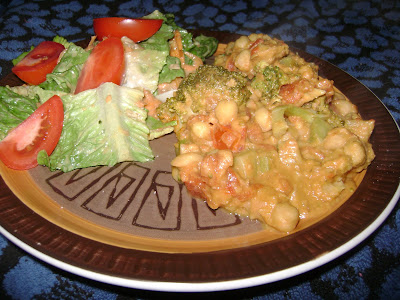 Eggplant parma (topped with a little sprinkle of breadcrumbs, rather than cheese), with Garlic Bread Zucchinis -- these are an Andy original, a garlicky bread-based stuffing inside of little zukes.  And some potato wedges. 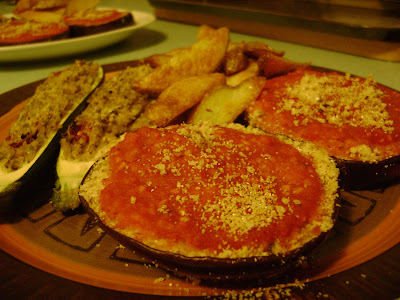 And some yummy veggie fried rice, with zucchini, green peas, and carrots.  Coincedentally, shortly after eating this dinner we tuned into MasterChef, where the pressure test involved fried rice. 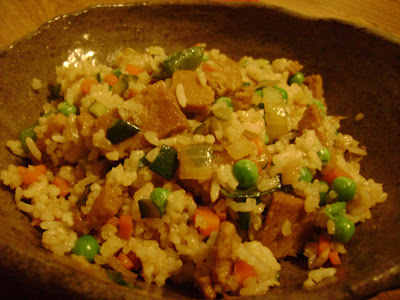 I'm so happy to have a fridge full of veggies again.
Email ThisBlogThis!Share to TwitterShare to FacebookShare to Pinterest
Posted by Theresa at 08:47

i'm so glad you are able to get veggies again! i would be craving them like mad after going without for so long. everything looks so good. i love eggplant parmesan. and i'm going to have to look up that peanut curry casserole in UV -- it sounds awesome.

You are so good making so much different food - I'm so stuck in a food rut most of the time! Those veggies look delicious - winter in NZ its potatoes and more potatoes :(

I'm very in love with brussels sprouts. Think I may now need to buy some on the way home from work. Two hours to go.... or more if I don't get this piece written...

I've been thinking all of Australia is affected by the Queensland weather and crop woes, but now I'm grateful that WA has unaffected vegetable stock of its own! I haven't noticed a change in the price or availability of most vegetables, just capsicum, and of course the banana situation on the fruit front.

That's one of the things I love in the Summer...veggies....they are fresh and in abundance.

Good to hear you have your veggie selection back! Sorry about all of those floods that had happened.

YAY Vegetables! I love brussels sprouts now too. I used to hate them , but I think my taste buds have changed. Happy Summer!

Hi Theresa, just stopped by to pass on a stylish blogger award - http://veganisethis.blogspot.com/2011/06/stylish-blogger-award.html

Have been reading your blog for a little while now and love your eats and tales from FNQ.

eToro is the ultimate forex trading platform for rookie and professional traders.