I have posted about them twice before, but without much detail.  But we've eaten them a few times recently, and I really love them, so I thought I would expand a little. 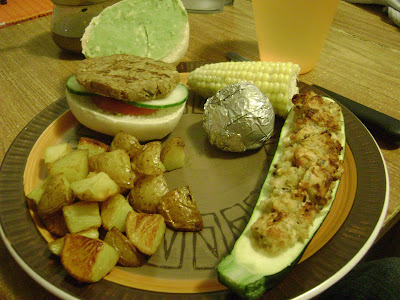 A crunchy, golden garlic bread zucchini served with roasted potatoes, a chickpea burger,
a foil-roasted beetroot, and some corn on the cob.
This recipe combines the crunchy, garlicky-ness of garlic bread, with the cuteness and healthy-ness of stuffed zucchini.  Here's how it goes:

One thick slice (or two pre-sliced bread slices) of multigrain bread, cut into crouton-sized chunks
half a head of roasted garlic
a good drizzle of olive oil
salt & pepper
1 zucchini

In a bowl, coarsely mash up the garlic cloves with a fork.  Mix in the bread and stir.  Slice the zuke in half lengthwise and carefully scoop out the insides.  Chop up the flesh, and then mix it in the bowl with the bread chunks.  Pour over 2-ish tablespoons of olive oil, or enough to coat the bread.  Stir it up, and season with salt and pepper.  Pack the bread mix into the zucchini halfs, pressing in with your hands to keep it nice and tidy.  Then, bake or cook under the griller - this part is even more variable than the rest of the recipe.  We usually co-bake, so cook these anywhere from 180 to 220.  They take 20-30 minutes, and you know they're done when the top goes all golden and crunchy.

Look, it's fully possible that this wasn't a completely original invention - someone else, somewhere, may have come up with the idea well before us! But, this is as original as an idea gets, so I'm happy to claim it on Andy's behalf.  Because it is pretty fantastic.
Email ThisBlogThis!Share to TwitterShare to FacebookShare to Pinterest
Posted by Theresa at 09:36 5 comments

Sometimes eating is about delicious flavours, but sometimes it is all about texture. 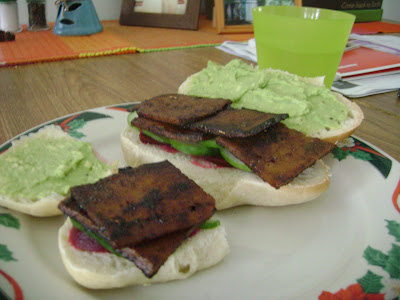 This sandwich was a pretty fantastic textural meal -- thin slices of seitan, fried up until nice and crunchy, so they even made a crunching noise when you bit into them; soft white (unhealthy but so smooth and yum) bread rolls; smooth & creamy avocado; crisp and fresh salad.  Luckily the flavours were good, too, but this sandwich was a textural joy.
Email ThisBlogThis!Share to TwitterShare to FacebookShare to Pinterest
Posted by Theresa at 15:39 7 comments

My carbon footprint is not doing so well these days.  Of course we still ride our bikes to uni most days (I'm up to more than 1500km for the year so far!), and barely drive anywhere, and don't buy much stuff.  But, since the start of July, I have flown to Perth and Melbourne, and been a passenger on a drive to Cairns and back.  Andy has been a passenger in a road trip down to Keppel Island, about 10-12 hours of highway driving.  And we're in the final planning stages for a Round The World trip which will put all kinds of nasty emissions out there on our behalf.  So I'm feeling a little guilty.

So when a friend (hi James!) offered me some garden-fresh produce, of course I said yes.  In terms of 'food miles', I'm going to go ahead and assume these eggplants (and some yummy cucumbers) had a grand total of zero -- because they were transported by bicycle. 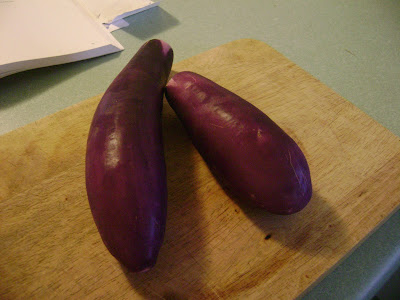 And they were super yummy, cooked down for half an hour or so, then mixed with tomatoes and herbs, following the recipe for Spaghetti alle Melanzane from Urban Vegan.  Except, instead of spaghetti, I served with gnocchi. 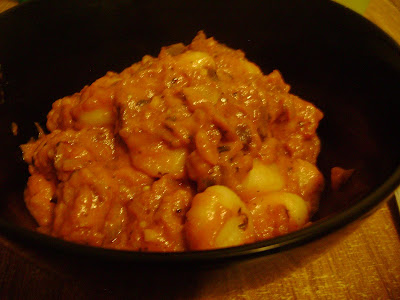 Because the other thing that suffers with all of this going places is spare time, so quick easy meals like this one are a necessity!
Email ThisBlogThis!Share to TwitterShare to FacebookShare to Pinterest
Posted by Theresa at 10:26 4 comments

When I was growing up, we ordered pizza fairly regularly from the local pizza place, Rocco's.  When I was a bit older, I usually went for a calzone, rather than pizza.  These were essentially just cheese, cheese and more cheese, encased in dough, with some garlic on top.  With some red sauce on the side for dipping, of course.

When I went to uni, the local pizza place, Sergi's sold what are colloquially known as 'fat bags'.  On the menu, they are called a 'pizza roll' -- basically, a pizza with red sauce and cheese, and pepperoni optional, folded in half and deep fried.  They were good, in a disgusting way, and I only ever ate a few of them.  Instead, I fell in love with the *other* local pizza place, Josie's, version of the pizza roll, which was not deep fried, had a better crust, and could be filled with anything.

Then, I went vegan.  Ordering calzones or pizza rolls from pizzerias became a thing that doesn't happen anymore.  I tried, in the early days of living with Andy, to make some yummy calzones but... they weren't so hot.  At the time, my crusts were grainy, rather than stretchy, and were always too thick.  So Andy was all, 'ew, calzones'.

But I convinced him to let me have another go, now that I've gotten better at pizza dough.  I decided to fill it with ratatouille, a folded version of the ratatouille pizza we invented a few years ago.

So I made my dough, split it into a few balls, and rolled each one really thinly - because the crust puffs as it bakes, so it is always thicker than you expect.  I piled up my ratatouille. 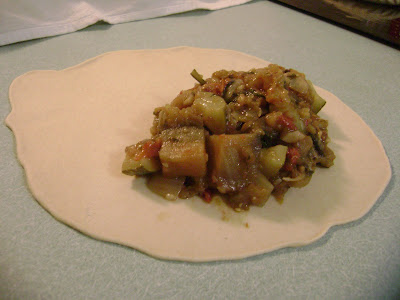 Folded and twisted the seam. 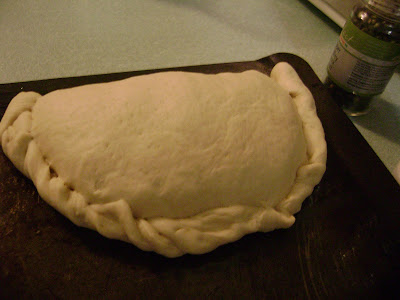 And then baked them.  And I'm happy to report, they were a success!  Aaand, I forgot to take a final photo, but they looked much like the pre-baked version, only browner.

Rolled pizza is back on the menu - yay!
Email ThisBlogThis!Share to TwitterShare to FacebookShare to Pinterest
Posted by Theresa at 07:24 4 comments

Labels: pizza, vegetables
Newer Posts Older Posts Home
Subscribe to: Posts (Atom)
“The animals of the world exist for their own reasons. They were not made for humans any more than black people were made for white, or women created for men.”