We've got fever, for Betty Beaver

When I was growing up, we lived about 25 minutes from a petrol station which had a sort of three dimensional sign featuring a massively-busty beaver in a very short, American-flag dress. I was just thinking how much I wish I could share a photo, and lo! Google to the rescue!

I mainly saw Betty Beaver when I was on the bus to sporting events (as the team manager, because I was definitely not willing to actually participate in actual sports!). We sang a song whenever we saw her:

I was, obviously, pretty cool.

Also when I was growing up, my mum had a food-splattered, red & white checker covered Betty Crocker cookbook. It lived permanently on the counter, and we all referred to it fairly regularly.

This Christmas, I was gifted a cash card that could only be spent in the US. I took the opportunity a few weeks ago to order some cookbooks from Amazon. I got two very healthy cookbooks: The Happy Herbivore and Let them eat vegan! Both are proudly low in fat and sugar, and actively avoid mock meats and things like wheat. The third cookbook I ordered is sort of the opposite, in all the best ways - Betty Goes Vegan by Annie & Dan Shannon.

I made my first recipe tonight for dinner 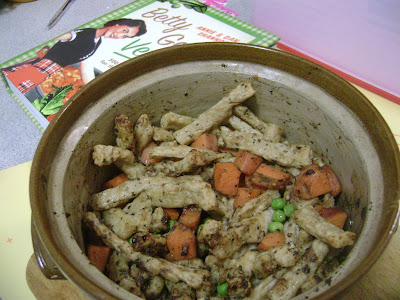 This is "Herb-Roasted Chicken and Vegetables", from p. 143. I used Fry's Vegetarian Chicken Strips, my first go at this frozen mock meat. I did make some substitutions - I used balsamic instead of lemon, I used sweet potato instead of white potato, and green peas instead of green beans. So, maybe I didn't really make this recipe, but in any case, it was fantastic.
So far, Betty Goes Vegan's definitely got the moves. Go Betty!

Email ThisBlogThis!Share to TwitterShare to FacebookShare to Pinterest
Posted by Theresa at 20:37 8 comments

Andy and I discovered the joys of pressure cooker risotto over a year ago now - some chopping, less than 15 minutes of cooking, and voila! Dinner on the table, and not a bad rendition of risotto for no stirring. As such, it has become a pretty regular staple in our weeknight meal rotation, especially since pumpkin is one of the few veggies that is good and available and inexpensive year-round up here.

As I recounted in my original post, one time we improvised, using a thick soup in place of stock in the recipe.  That was a disaster. But more recently, we have tried some safer improvisations, with some success.

Our first rendition is based on the recipe for pumpkin risotto from Urban Vegan - in fact, the only real difference is that our version is pressure cooked. Red wine, sage, sundried tomatoes and pumpkin. And we added broccoli, because, yum. To get the textures right, we put the broccoli stems in early and pressure cooked them. The florets were stirred in after we took the risotto of the pressure, and sitting in the hot risotto for 5 minutes cooked them enough for our liking.

The second variety is herb-centric. Pumpkin, red capsicum, green peas, and sosomany herbs. There were garlic chives, basil, and parsley mixed through this and they made it delicious. The herbs were added right at the end before we served, so they stayed nice and fresh.

Our final attempt was a little on the weirder side, and wasn't perfect but could easily get there. It was a thai-inspired pumpkin risotto. We cooked the rice in some lime juice, instead of the usual wine that is in risotto; lime zest, lemon grass, ginger and garlic flavoured the stock; pumpkin, red capsicum and spinach were then finished off with just a splash of coconut cream. Unfortunately, the risotto was pretty soupy even before the coconut cream was added - I think more liquid came off the pumpkin than I was expecting. Still, the flavours were fab and thai-inspired risotto should totally be a Thing.

Email ThisBlogThis!Share to TwitterShare to FacebookShare to Pinterest
Posted by Theresa at 17:35 9 comments

In just a few weeks, Townsville Vegans will be participating in the Worldwide Vegan Bake Sale. 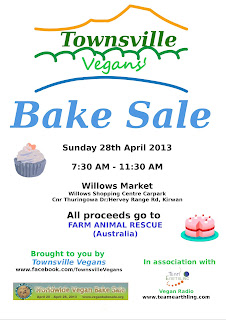 I'm super excited for the chance to bake lots of things, raise awareness about veganism out in the community, and raise money for a worthy charity. I've started practicing some recipes to narrow down my baking contributions. One that is definitely settled so far is these Apple Walnut Cinnamon Scrolls. These are full of sugar, gluten, and cannot be classed as a health food by anyone's standard, which should mean they are a perfect candidate for winning over some staunch non-believers!

I'll also make these equally unhealthy chocolate peanut butter cupcakes with salted caramel drizzle, because they really impressed lots of non-vegans when I last made them. 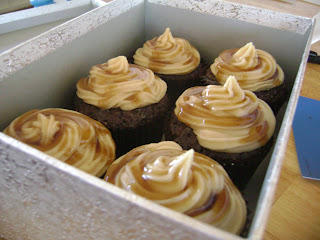 But for the health conscious, I'm going to contribute some brownie balls. These are based on Hannah's amazing recipe, and they are really delicious. They're also gluten free, sugar free, and super easy to make!

If you're in Townsville, mark your calendars now - Willows Market on the 28th of April. If you're not in Townsville, check out the Worldwide Vegan Bake Sale page to see what's happening in your area, or host your own!

Email ThisBlogThis!Share to TwitterShare to FacebookShare to Pinterest
Posted by Theresa at 10:03 8 comments

I think I said yes to far too many things this year, and now I find myself really very busy. As a result, I tend to spend the weekends recovering from my crazy busy weeks by crocheting, gardening, reading, socialising, and not really doing much online. As a result of THAT, my poor blog has been neglected.

I really thought that I would give this site some attention last weekend. We had 4 days off, afterall, and no concrete plans. But, instead of queuing up posts with recipes, gardening successes, and craft projects, I spent time cooking, gardening, and sewing instead. But it was a glorious four day weekend - it went by slowly, and gently, and really gave me a recharge. I honestly think we should have a four day weekend every month.

My slow weekend involved lots of lovely things, like...

Peanut Butter Oat pancakes. I saw this posted on Facebook on Friday morning and had to have them. I made some changes - I used chia instead of flax seeds, I used sunflower oil instead of melted butter, things like that.

When I made the batter, I thought it looked like Definitely Not Enough, so I quickly mixed up a second batch, effectively doubling the recipe. That turned out to be unnecessary - we were so full we had leftovers, which admittedly were a nice snack. So even greedy gutses like Andy and I found this recipe enough for two people - if you make it yourself, don't be fooled by the small quantity of batter.

Gardening. Mainly Andy did the gardening, with some occasional support from me. He built some garden beds, covered the front bed with cardboard and then mulch, planted loads of seeds, and harvested this gigantic sweet potato.

Easter Eggs. I made some totally amazing Coconut Cream Eggs from Celebrate Vegan. I know Easter is over, but it is worth making these, even if you shape as truffles, because OMGtheyaredelicious.

I mixed up the filling, which involved cream cheese, icing sugar and coconut, and in my version a splash of cointreau, and froze teaspoon-sized blobs on a baking sheet. Once they were frozen-ish, I could shape them into vaguely egg-shaped things. I had a little chocolate left over after coating all my eggs, so I made a ganache and drizzled it, which was sort of stupid but not bad.

Curtains. I made them, with the help of Nacho. Now our bedroom is nice and dark, no matter how full the moon is.

I also made jam, finished crocheting my blanket (now I just need to edge it), and we dog-sat Tika's friend Zoe. It was a full weekend, but it all happened at a nice slow pace. I'm looking forward to the upcoming public holidays to do more of the same!
Email ThisBlogThis!Share to TwitterShare to FacebookShare to Pinterest
Posted by Theresa at 14:52 7 comments

Labels: chocolate, craftering, garden, vegetables
Newer Posts Older Posts Home
Subscribe to: Posts (Atom)
“The animals of the world exist for their own reasons. They were not made for humans any more than black people were made for white, or women created for men.”