Just about 12 months ago, we planted our banana suckers (courtesy of Dee) into the ground. Today, we have fruit ripening on them. It was actually about two weeks ago that I noticed the bud. I had been on the lookout for a while, so was pretty excited when I saw it there. It took a few days to turn red and droop downwards, and then it was only another day before we saw the baby bananas on the stalk. They form under a petal, and the stalk keeps growing down towards the ground. 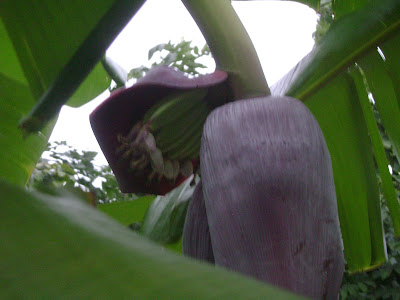 Each day we get a new hand of bananas - we're up to 6 at the moment, and I'm expecting many more to come. 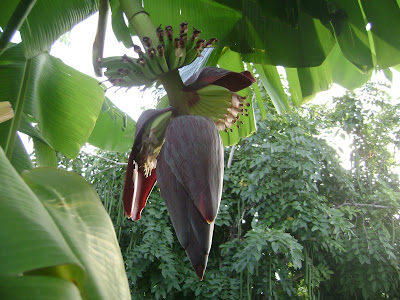 Once the bananas have all formed, we'll try cooking something with the banana flower, and then we wait for the fruit to ripen. 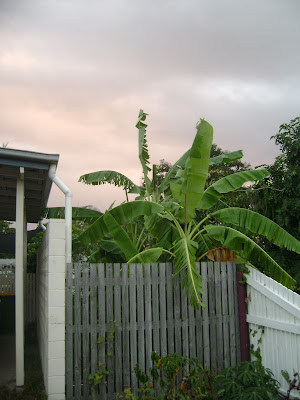 Email ThisBlogThis!Share to TwitterShare to FacebookShare to Pinterest
Posted by Theresa at 20:05 5 comments

We have been loving our new cookbook, Let Them Eat Vegan! by Dreena Burton. We've enjoyed everything that we've tried so far, and have lots more recipes tagged to try. It's healthy, but in a gourmet way. The flavour combinations are sophisticated and the recipes centre on veggies, beans and whole grains - which really suits the sort of food we've been eating a lot this year, anyways.

Our first try from the cookbook was Jerk Chickpeas. I googled it afterwards, and found it all over the internet - my first choice of recipe was one that had been released as a teaser! But I can see why - they were easy to make, and very delicious. We made ours on the BBQ, rather than the oven, roasted some eggplants in them as well, and made them spicy. At the end of cooking, we mixed through some rocket from the garden, and put them in wraps. 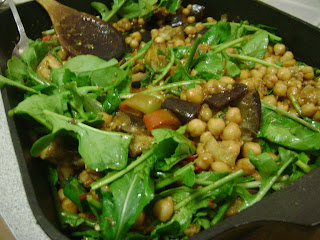 White Bean Mashed Potatoes were a yummy and healthy side dish, but a bit more work than I prefer side dishes to be. Potatoes, pumpkin and cannellini beans mixed together were creamy and rich without being super fatty. We had them with eggplant parma, tahini-garlic gai lan, and roasted radishes. 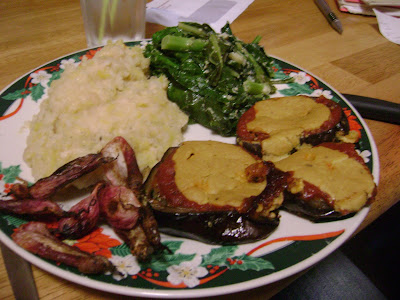 Andy wasn't sold when I told him I would make Lemon-Infused Mediterranean Lentils. He doesn't like the idea of brown lentils just generally, even though when I do cook them, he generally likes them. The same happened with this dish - he liked them so much, he ate two HUGE bowls full. I didn't follow the recipe exactly - I added some zucchini and eggplant to the mix, and made it saucy, and it was fantastic served over rice. The saucy-stewy lentils were a great cold-weather meal, but the lemon juice and zest kept it from feeling stodgy. 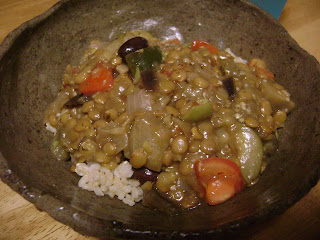 Tonight's dinner was similarly "based on" with lots of changes, this time based on Yellow Sweet Potato Chickpea Pie with Basil. I used orange sweet potato and cannellini beans instead of chickpeas. This was much better than most of the quiche-type things we have made in the past, partially because it doesn't try to be a quiche at all. The slight sweetness from the sweet potato, the aniseedy basil, and the creamy beans all combined into something magical. Andy suggested (and I agree wholeheartedly) that these would be great at a party in mini form. 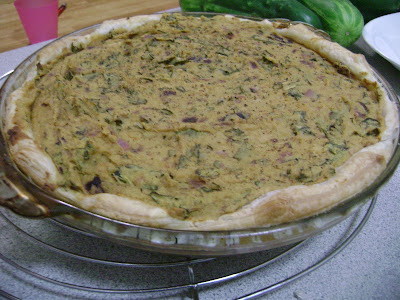 This is my current go-to book for recipes when we've got veggies I can't decide what to do with. I'm very glad I got this book!

Email ThisBlogThis!Share to TwitterShare to FacebookShare to Pinterest
Posted by Theresa at 20:04 8 comments

Before I get into this very exciting (or maybe that's just me?) post, let me mention that I'm now on Facebook! Personally, I have had a Facebook account since 2004. But The Tropical Vegan now has a Facebook page. If you use Facebook, please like me  - I expect to update it a bit more regularly that I do this blog, at least during busy work-times.

Now, for the post. One of the very exciting things we have growing in our garden is a luffa. I have posted about it previously. In the comments of that post, a lot of you said you'd never heard of luffa before. I suspect that's true when I'm talking about the vegetable, for eating purposes. Most of you would be more familiar with the loofah, the bath sponge. Good for exfoliating, and completely plant-based. 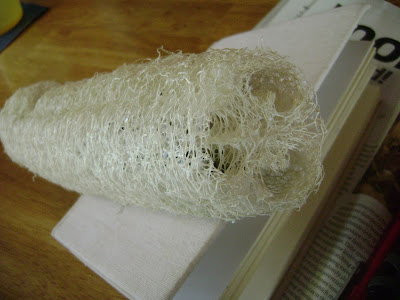 They are closely related to zucchinis, pumpkins, and cucumbers, and grow very similarly, if a bit more vigorously. Our back fence is covered in the lush, green vine, and all summer we've been picking handfuls of the small fruits for eating. They are good stir fried, and added to stews and things like that.

We actually have three plants, one ridiculous and two which have struggled more. But even the struggle-y ones have produced loofahs, like this one here. Once the fruit get a bit big, the fibres start to form, and they're no longer good for eating. So those ones we have left. They take a while, but eventually get mature enough to pick and turn into sponges. The process is actually ridiculously simple. The hardest part, for me, was knowing when to pick them. I read that you should let them get soft, but I tried a few like that and they weren't mature enough. Then I realised that they are firm when they are very young, they go soft as they grow, but then they firm back up again. I asked my neighbour, who gave me the seeds in the first place - the trick is to wait until they go a little yellow-brown. Size and firmness don't matter as much as this.

Step one is to cut off the ends. This isn't a necessary step, but I find it easier to get the seeds out, and the end result is prettier.
Then peel off the skin. It comes off by hand with very little effort, really. Not as easy to peel as a banana, but more like an orange. Once they're peeled, rinse out the seeds and gunky bits. I've used the hose for this, but the laundry sink is easier. My method is to stick my finger in and scoop out as much as possible. If some seeds stay in, it's no big deal, but too much gunk will make them go mouldy (as I learned from experience). They are pretty flexible, so you can squeeze them and bend them a bit at this point to wring out as much loofah-gunk as possible. 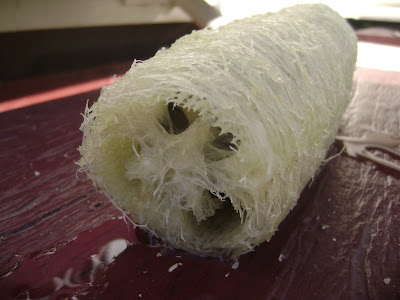 Then I squeeze most of the water out, and find them a sunny spot. Let them hang out and dry for a few days, until they have no moisture left. 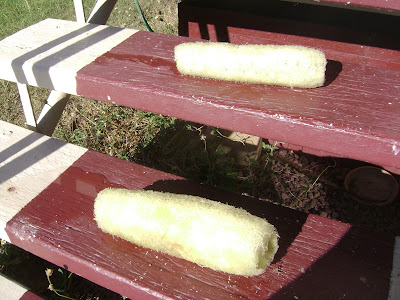 I think these make fancy gifts for people - look, I made you a sponge! But they also work well, cut into smaller bits, for washing dishes. We have plenty more to harvest, so we probably won't need to buy sponges again for a long time. 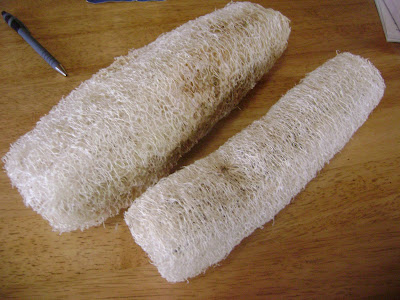 Sure, most discussions of "locavorisim" refer to the food we actually consume, but I think growing my own dish-washing sponges is pretty damn cool.

Email ThisBlogThis!Share to TwitterShare to FacebookShare to Pinterest
Posted by Theresa at 09:24 5 comments

Labels: DIY, garden
Newer Posts Older Posts Home
Subscribe to: Posts (Atom)
“The animals of the world exist for their own reasons. They were not made for humans any more than black people were made for white, or women created for men.”