Saturday was our reason for going to Sydney. After a mere six weeks of engagement, Andy's older brother got married.

The plan was beautiful: a wedding on the headland overlooking Clovelly Beach, drinks on the deck while the bridal party had photos taken along the water, and then the reception at the Surf Life Saving Club. Unfortunately, it rained. Actually, it didn't just rain -- it poured. All day. So those plans were swapped for an entirely indoor event. On the plus side, the weather did provide a fairly stunnig backdrop, as the waves crashed against the headlands. 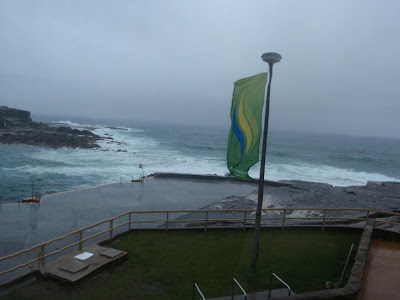 With only a month to plan the wedding, I offered to liaise with the caterers about vegan meals, but the bridal couple said they had it under control. They asked about vegan wines; I told them not to worry, I wouldn't drink anyways.

After the ceremony, hors d'ouevres started coming around. With big trays of lobster tails being passed, I assumed I should quell my hunger until dinner, but I was greeted with an entire plate to myself of kumara spring rolls and veggie sushi (each of the veggies got their own plate). We all sat for the entree, which for the vegos was a grilled vegetable stack. Sure, it's not the most imaginative, but it was good, all covered in pesto, with rocket and pinenuts underneath. 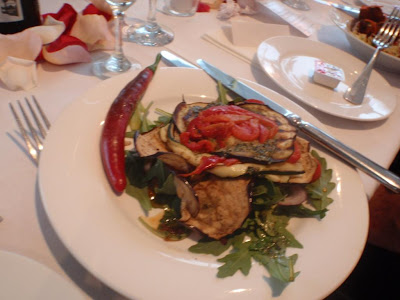 Yes, that's a whole cayenne as a garnish. Andy took a bite, thinking it might not be hot... but it was.
With such a delicious entree, I had high hopes for the dinner. The server brought out a bottle of organic, vegan white wine for Andy and I, which I tried because I felt obligated but it was far too dry for my palate. And she brought out bread to share at the table, super seed-filled whole grain bread which was baked and served in terra cotta pots (very adorable).

Then came our mains -- polenta balls and a grilled portabella on rocket and pinenut salad. This was good, but it felt like another entree. There wasn't heaps of it, and it was so similar to the first dish -- drizzles of pesto, pine nuts, rocket, roasted capsicum -- that it just wasn't that satisfying. Still, the polenta balls were tasty and I was grateful to have food at all! 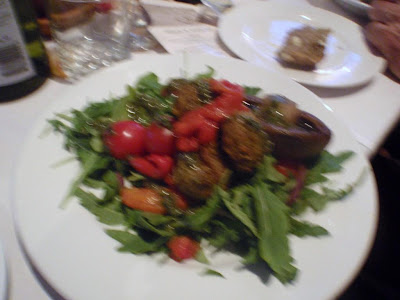 Apologies for the shonky photo, but I was at the parental table and didn't want to dilly dally with my picture-taking!
Email ThisBlogThis!Share to TwitterShare to FacebookShare to Pinterest
Posted by Theresa at 12:01

glad at least part of the dinner was tasty, it certainly looks nice!

Hmmm, sounds like the caterers went for the "mushroom as a substitute for meat" concept, while forgetting that mushrooms aren't exactly a filling protein... but still, it's so nice there was something for you, and that they went to the trouble of getting vegan wine, too!

At least they made an effort with the meals but yeah, seems to be a regular thing that the main is more like an entree.

Hmmm, there was a lot of good food consumed on this Sydney trip! I've only got through 3 posts and I see there are still several more to go!

BlueHost is definitely one of the best hosting company with plans for all of your hosting needs.