Since we got in to Sydney so late on Thursday night, Andy and I planned ahead and brought some food down with us. And we had cereal in our room for breakfast on Friday morning, so our first meal out was lunch on Friday. We went to probably the best vegan place in Sydney: 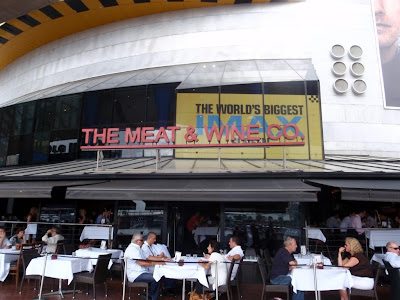 Just kidding (I am so hilarious). We did not go there, but we did try to get into the Imax to see Avatar on Friday only to find it was sold out. Where we did eat was described to me several years ago as the best vegan place in Australia: Mother Chu's Vegetarian Kitchen.

We were a little overwhelmed by the menu -- pages and pages to choose from is hard to handle when you are used to a small handful of veganisable menu items. We finally decided on Tempura with Salad... 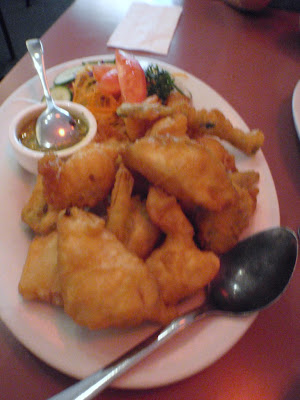 ...and Fried Noodles with Vegetables and Gluten (I think that's what it was called). 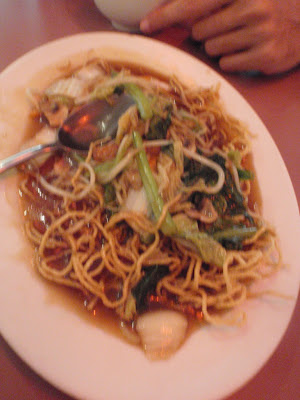 Both were good, but not great. The food was hot, fresh, and flavourful, but I've had better vegan asian food. It is highly likely that we chose two dishes that were underwhelming, as there were so very many choices. We both agreed that this was good food, but nothing super special. However, I appreciated it more than a standard Asian restaurant for the sheer volume of choices on offer.
Email ThisBlogThis!Share to TwitterShare to FacebookShare to Pinterest
Posted by Theresa at 08:17

bummer that the food wasn't great! haha there is a store in the ferry building in SF called boccalone or somethign, and right under it the sign says "tasty salted pig parts." PASS!

I'd feel more sorry for you because of this less-than-stellar meal, but I've seen a sneak preview of a certain cakey treat someone got to have... :P

Vaala - The salad was really just a little bit of raw veggies at one end of the plate, which Andy scoffed. Not really what I expected based on the menu!

Nice post!!! Thanks for sharing this..
Darling harbour things to do