I haven't been blogging much lately because I've been keeping pretty busy. A lot is happening in my neck of the woods. You may remember about a year ago when I was very busy with the Hurley trial--a police officer charged (for the first time ever in Australia) with manslaughter after an Aboriginal man died in police custody. Well, that officer is back in court, trying to appeal the decision that sent him to trial in the first place. It's all a bit ridiculous--less than an hour after his arrest, Mulrunji was dead. And this police officer is refusing to accept any responsibility.

Of course we couldn't let the issue pass with no media attention, much as Hurley would have liked it that way. And what is the best way to get the media's attention? A 10 metre banner is a good place to start. Add in some local Aboriginal elders who have a lot to say, and you have a surefire way to make the news. 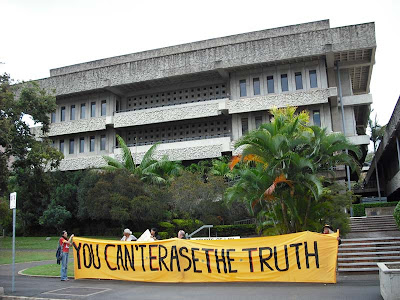 (There were more people than this before this photo was taken. All up, there were about 10 or 20 protesters, and an equal amount of journalists, photographers and videographers. This picture was taken after they had all gone into the courthouse.)

I have not been too busy to eat, although I've been eating pretty junky food. Think toast, ice cream, and noodles. One very good thing (though not healthy) I've been eating is Cherry Ripe Slice. I saw the recipe posted by wantingkneading and knew I had to try it. I was going to wait until Andy came home to share with him, but then I decided to make them for an animal rights group meeting. But the meeting was postponed, so I had to share them with others and eat a bunch myself. 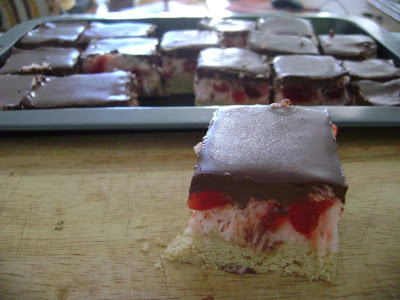 Overall the recipe was fantastic, and really quite easy. There are three steps, but each layer is quick to assemble and has very little hands-on time. My only complaint was that there was too much base for my pan-size, so I had to eat a bit of it before it went in the oven (what a shame). Next time I'll chop my cherries more finely, but otherwise this was a real winner! Three cheers for wantingkneading! Mine didn't photograph as nicely as hers, but they were so delicious I didn't really mind.
Email ThisBlogThis!Share to TwitterShare to FacebookShare to Pinterest
Posted by Theresa at 15:06

You are the first person who has ever posted about/tried one of my recipes- I am so excited and happy that you liked it!
I keep trying to write other adjectives but all I can come up with is excited, so that will have to do. EXCITEMENT!

Good luck with the outcome of the appeal!

That's some awseome slice you have there.

I'd be interested to see exactly what he's appealing on (such a geek am I!). Bloody cops! You can bet I won't be working with them when I graduate......

the world might be ugly, but that slice looks amazing... (also, even your 'junky' food sounds awesome to me right now. mmmm toast!)

Oh my, that treat sounds FABULOUS!!!

Good for you and the others for speaking out against injustice! I hope justice is served.

That Cherry Ripe Slice just about put me over the edge...

bella--I'm not exaggerating, they really were fantastic!

vegetation--the judge has reserved his decision for a later date, which means we may have to wait *months*. Argh!

Amy--I'm not sure how it would be put in legalese, but he is challenging the coroner's decision to accept the evidence of Roy Bramwell. The defense reckons he was too drunk at the time and too inconsistent with his evidence. I think if anyone's been inconsistent it's Hurley! But anyways, I've heard from a very reliable source that RB was threatened before the investigation began and he's scared out of his mind. He's due to be let out of prison in a week or so (for unrelated but awful matters) and he's afraid for his life. No wonder he has been inconsistent!

You can't erase the truth...but you can certainly pretend like it doesn't exist. I hope the good guys win on this one! It's always interesting to hear about your activities with the indigenous population of Australia since we hear nothing of those sorts of things up in the states.

Also: excellent looking dessert. The color of the cherry filling is otherworldly!

Good for you for taking a stand. As always, you're an inspiration.

And the dessert looks and sounds tres fabulous.

I'm super impressed by the work you do...and your yummy looking dessert.

Is that Palm Island you are referring, too?

P.S. Cherries are so expensive here in Oz. I miss the days when I was a child and spent the afternoon high up in the cherry tree ...

Groover, it is indeed palm island. Good spot! And cherries, yes, are terribly priced. I actually haven't eaten a stone fruit since Xmas 2006, when I was down in NSW. The ones that make it to Townsville are not very flavourful and they are overpriced, so I just avoid them!

Love that pic with the banner, there's no missing that one.
And cherry ripe slice looks pretty damn tasty, am surprised there was any left for Andy...

P.S. I'm wondering what happened to the poster after the protest...? How does one recycle a massive yellow poster? (-:

yum, those look great! i love cherries so i'm sure i'd love that. oh and i completely hear you about the eating junk food lately, i just have no time too cook! must get out of that habit eventually haha

Monika--unfortunately, the issue hasn't had any sort of resolution yet, so don't jump the gun! We may need to use it again. Afterwards though, maybe we can turn it into tee shirts and pants? Or we can make a sail for a boat? Or lots of kites?

It's great that you speak out against an injustice.

That banner is very impressive! Good luck. Sometimes I just don't understand how these kinds of trials can get so screwed up in court.