Last Christmas, Andy adamantly told me that he didn’t want to do anything; that the day was just another day in his opinion. Then on Christmas Eve he was sad that we weren’t doing anything, so we quickly decided on a menu, rushed to the shop for some ingredients, and threw together a nice Christmas Eve dinner.

This year I pre-empted his indecision and planned a bit better. This meant that I was able to make things in advance, so there was much less to do before dinner on Christmas Eve (and even less to do on Christmas Day). But, we still had quite a feast, and a lot of fun, despite our quiet, low-key activities.

The weekend before Christmas, I baked some masala chai cookies, and made some coconut-ginger truffles. Wrapped up on a pretty (second-hand) plate, these were gifts for a few people, but I made sure there were plenty of leftovers for ourselves.

Though we’re not really Christmassy people, while at the public library on the 23rd I grabbed a free paper reindeer crown, fastened it around a candle and we had out christmas centrepiece.

We started our Christmas feast with some Chilled Zucchini Soup, an Urban Vegan tester recipe. This was a nice, light soup and it was the perfect way to get the meal started on a hot, humid day.

We finished our wine, and then it was time for the main course. Pumpkin seitan (based on Celine’s recipe) with Pecan-Cherry Stuffing (another Urban Vegan tester) was the hearty feature. With it, we had a creamy dill potato salad and a spinach salad.

We were pretty full (especially Andy, who had been eating stuffing all afternoon) but we found a bit of room for a few bites of Trifle, topped it with some Sabayon Sauce, an Urban Vegan tester recipe. It was a sweet, boozy, and yummy end to our Christmas feast.

The next morning we woke up and had a lazy breakfast. We opened a few presents sent up by Andy’s family. Andy’s mum went online to order me some vegan Macadamia Nougat candies and a really great Aussie vegan cookbook called Wild Morsels. Andy got a wind-up head torch which needs no batteries, and some organic ginger and a tea sampler pack his parents picked up on holiday recently. And from Grandma, we got some hand-knitted tea towels. 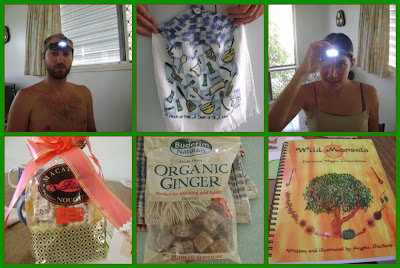 Then, we packed some leftovers into our cooler bag and hit the road. We headed to Alligator Creek, about 30 minutes south of Townsville. We weren’t the only ones with that idea, but we were able to have a quiet swim away from most of the crowds.

We climbed around on the rocks.

And we sat in some mini-waterfalls for a free spa.

Then we went back to the picnic area for an early-ish lunch of leftovers and watermelon.

We were visited by some curious bush turkeys, and a few nasty march flies.

Then we went for a short hike up the hill to Cockatoo Creek, where we definitely enjoyed sitting in the running water to cool off.

We ate some cookies before walking the two kilometres back to the car and then heading home.

We stopped briefly on our way out of Alligator Creek to buy a bag of Mangoes from this small orchard.

All up, it was a great way to spend Christmas Day. But, luckily for us, Australians celebrate Boxing Day as a public holiday and the timing of the days meant that, this year, we were granted with a four-day weekend (4 and ½, if you count our early knock-off on Christmas Eve.... nearly 10 days if you include the closure of the uni until after New Year’s Day).

To celebrate the public holiday, we lazed around the house reading, sewing, and snacking on leftovers, as one does the day after Christmas. In the evening we went to see the epic new-ish film . I know this has not done well in , but I highly recommend going to see it. It’s not the most vegan film—the beef industry, horse breeding and riding, and kangaroo shooting all have their place. But, if you can sit through a bit of that, then it’s worth watching for a compelling depiction of Aboriginal-settler relations in the first half of the 20th century as well as the bombing of in WWII. If you go see it, or you have already, I’d like to know what your thoughts were on the movie...

The long weekend continued in a similarly lazy fashion. Andy made apple pancakes for breakfast one morning, which I topped with some leftover Sabayon sauce.

We read more, went to uni for a bit, I sewed some more, we ate lots of food, and we bought more mangoes at the market (expect a post soon!). Basically, it was a great, long, summer weekend and I wouldn’t have spent it any differently.

Email ThisBlogThis!Share to TwitterShare to FacebookShare to Pinterest
Posted by Theresa at 10:01

So glad that Andy wanted to truly celebrate after all!! :-)

it looks like you had a great time!, all the food looks so fresh and summery

glad you two decided to celebrate, and with such great eats!

and i saw australia....loved it! and it totally renergized my passion to come back to AU asap! yeep!

Sounds like a perfect way to spend Christmas!! All the food looks delicious :)

Next year, I wanna go to Australia for Christmas. Though it was unseasonably warm here on Xmas Eve (75 degrees), I'd have rather spent the day in that beautiful natural area in your pics.

The stuffing idea for Celine's seitan is genius. I've made that pumpkin seitan recipe before and it is TO DIE FOR.

It all looks so yummy! And Alligator Creek looks like the perfect place to cool off on a hot day!

That sounds completely idyllic! I especially like the photo of you and Andy with your matching head torches... ('_^) and that trifle looks soooooo delicious!!!

I dream that some day, I'll escape from the dreadful Canadian winter to enjoy an Aussie Christmas too... I'm terribly envious of your weather — and your food! Buying mangoes by the bagful sounds like my idea of heaven!

I hope your paid attention to the weather in your hometown... we in North America got walloped with bad weather right before Christmas! Thanks for the Australia review, I can't wait to go see it.
Do you think I could ask you a question about grad studies in Australia? Let me know if so: maureen.e.robinson@gmail.com

Sounds incredible & I love your photos! Weird to think of Christmas week as a long summer weekend! Your UV dishes look awesome - so much fun testing them! Cheers!

Looks like you guys had a great Christmas meal together! The Urban Vegan testers sound interesting too. Also, I like Buderim's Organic Ginger! Happy New Year!

Sounds like a lovely Christmas! Although, I don't know if I could do Christmas in the heat. I've always lived in Canada and have always been home for Christmas. Something would seem to be missing without the cold weather. And don't you love having Boxing Day off? I need that day to recharge.
Looks like you've been doing a decent amount of recipe testing. I'm up to 26 and ready to do 2 more in the next couple of days - ingredients in and all that. I hope Dynise can be ready for her deadline.
I wish you a very Happy New Year and great things for 2009!

Andy sounds like omniman! Looks like you had a great holiday. Thanks for testing the recipes... So glad you liked them.
Happy New Year!

i saw australia with my brother, who was an extra in it (he played a soldier in the bombing and hospital scenes) and really didn't like it. it was so so long and a bit too silly. i found myself rolling my eyes at the kitch-ness and racial stereotyping ... but each to their own! glad to hear you had a great christmas