Andy and I recently ordered a soymilk maker, and we have been busy milking ever since.

We ordered a SoyLove from Nature's Wonderland, pretty much only because the seeming favourite of the blogworld, the SoyQuick Premier, is no longer for sale in Australia (which is a shame, because it sounds pretty magical).  The SoyLove has a basket, into which you put the beans or grains for milking, and a big basin of water.  It simply heats the water, cooking the beans, and then grinds them so finely that they make their way out of the fine mesh basket and into the liquid, becoming milk.  The whole thing takes 30 minutes. 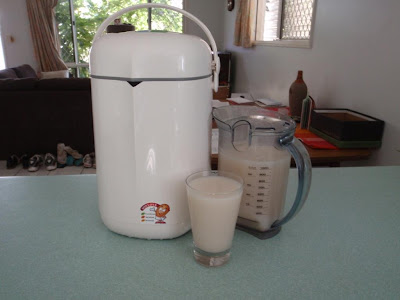 We are still new to this and are still working out recipes, but our favourites so far involve soy beans, some almonds, and something else fatty like coconut or sesame seeds.  As we progress with our milking skills, I will post recipes on this blog. 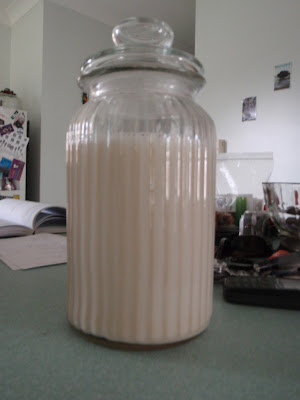 One of the exciting side-features of a soymilk maker is the ability to make tofu.  You simply make a watery batch of soymilk, and add coagulant.  The milk separates into curds & whey (Miss Muppet would appreciate that). 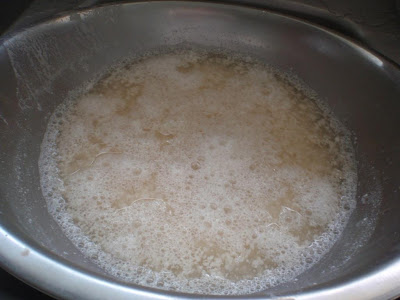 Then you simply scoop out the curds. 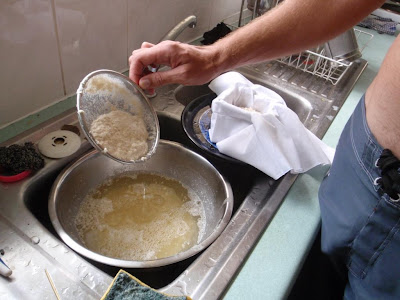 Put them into a tofu press (which came free with our SoyLove) lined with cheesecloth. 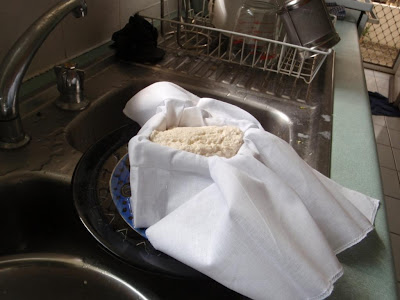 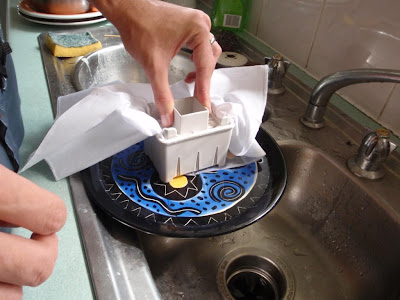 For firm tofu, press some more. 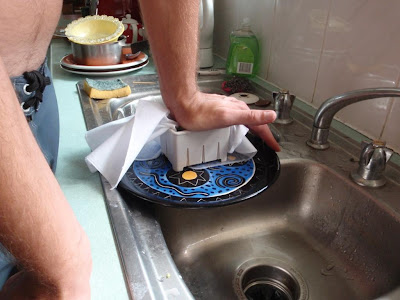 When you take it out, it will be nice and compact. 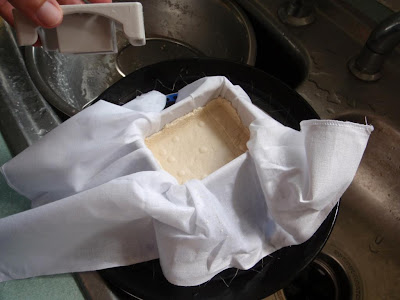 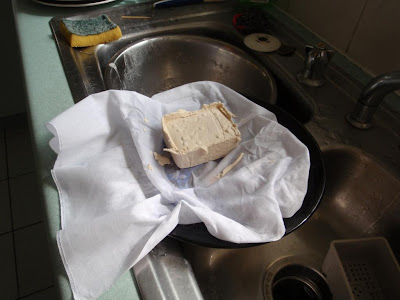 Perfect for marinating and baking. 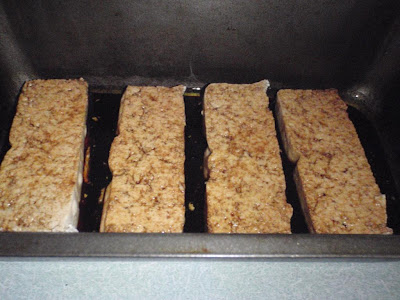 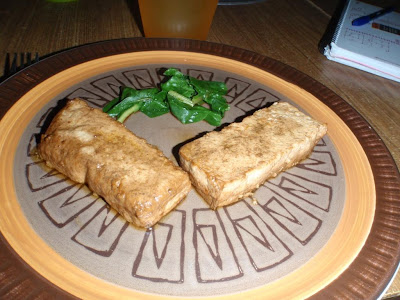 The other side effect of the soymilk maker is okara.  This is the highly nutritious soybean pulp that you strain out of the milk (which I didn't even realise you had to do at first, since it isn't in the shonky Korean-translated instructions.  That first batch was a *thick* 1.5 litres).  We had the bright idea to experiment with okara recipes, without actually following recipes.  This was a bad idea.  I made okara meatballs by adding gluten flour and some flavourings, and they were mushy-chewy-stringy and not nice at all.  Matt Preston would have thrown it on the ground, but when the ad break finished he still wouldn't have had anything nice to say about it. 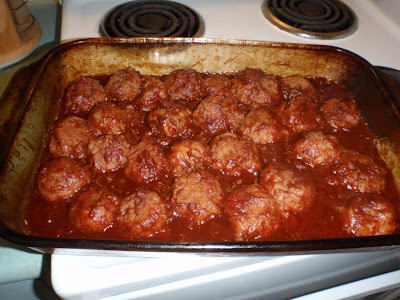 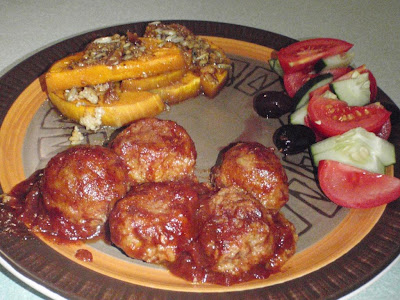 However, Andy added a bunch of okara to some burrito filling, which made it creamy but didn't add any kind of flavour or grainy texture. 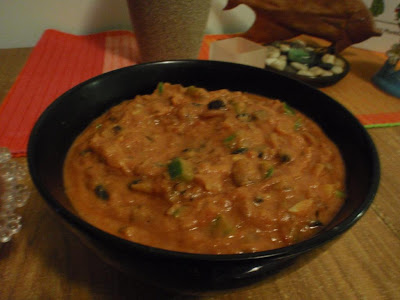 We have since copied several okara recipes from various blogs and I will let you know how we go as we try them out.

We haven't found a perfect batch of soymilk yet, but at less than 50 cents for a 1.5 litre batch, we are going to keep experimenting until we find one that Andy finds acceptable in tea.
Email ThisBlogThis!Share to TwitterShare to FacebookShare to Pinterest
Posted by Theresa at 14:40

I love your soylove! You must be having so much fun with it! I want something like that but for almond milk:)

thanks! I will be watching with interest to see how you go. Bonsoy is a little too luxurious for my budget these days!
(long time reader)

I've just yesterday read a whole heap about soy protein - the good, the bad and ... yes ... the ugly. Apparently soy protein mimicks estrogen in the body, which is not necessarily a good thing. Have you heard about it or read about it? Your thoughts?

How cool! I didn't know this machine does so much. How many soybeans do you have to use to make a huge batch like you did?

I want one! The tofu-making looks like such fun! I think I'll ask for one for Christmas.

Carissa - we've been adding almonds to the soymilk, which makes it really yummy. I think you could use it with just almonds, but it wouldn't be raw (if that is an issue).

Groover - I've read lots on soy, and it's hard to know what to think because there are so many different conclusions people come to. But I do know that 1) science is easily manipulated, and I question who is behind every study, good or bad; 2) compared to what I've read about animal protein (The China Study is a must-read), soy sounds rosy by comparison; 3) people have been eating soy for millenia; and 4) I've actually read that because the phytoestrogens in soy fill up the estrogen receptors in the body, the body doesn't need to produce as much estrogen which actually has a positive effect. I don't know if that is any truer than the naysayers, but Andy hasn't grown boobs yet ;) That said, I do think that variety is good in any diet so we try to eat lots of other beans, seitan, veggies, nuts & grains.

dreaminit - 1.5 litres of soy milk needs 100 to 150 grams of soy beans, depending on how creamy and rich you want it. We get our beans for $2.75 a kilo from the asian grocery. And each batch uses about $0.11 cents in electricity, so it's really quite cheap.

Wow! What a cool machine.. and the fact that you can do tofu in it as well... SCORE!

Keep us posted with your taste testings!

Yep, I'm in awe. Fresh soymilk and fresh tofu? How wonderful! And I've seen recipes for okara before and always lamented that fact that I've never, ever seen it available anywhere. Hmmm, do you think you could bring a tub of it to Canberra in September? ;) Oh wait, no, the bad on liquids... shucks :D

Toby & Hannah - I will definitely be trying to dry out okara, as I've seen on a few other blogs, which might make it a bit more transportable. If it works, I'm more than happy to share :)

Wow...I'm seriously impressed! Your tofu looks like the kind you buy at a shop. I want one (I'll let you do the research on the perfect milk and await recipes...and maybe I'll have convinced my bank account that a soy milk maker is worth it)!

Nice post! I was pleased to see the photos of the tofu making because we got a free kit with our maker too but I haven't actually used it yet!

I'll be looking forward to seeing your recipes because we haven't had a huge amount of success with our homemade soy milk recipes. I'm a bit of a crazy experimenter. I can recommend half soy, half macadamia nuts as being delish though.

I like this site for okara recipes: http://okaramountain.blogspot.com/ but if you have any other recommended sites for homemade milks/tofus/okara recipes I'd love to hear them!

Regarding the soy debate, I think it's a good idea to keep everything in moderation.. I try to avoid relying on soy milk and tofu too much and try to change it up. At the moment I'm drinking oat milk part time and finding it quite nice. I haven't tried making that in the machine though. When we tried rice milk in the machine it was horrible!

You should also try turning your homemade soymilk into soy yoghurt! It's very easy and very little work. http://vegetariancuisine.suite101.com/article.cfm/how_to_make_vegan_yoghurt_at_home

Making your own tofu also gives you the ability to spice it in a way that you can't with storebought tofu. Oh, how I wish I had a soymilk machine!

I didn't even know these things existed! WOW! can you make nut milks with them too?? :)

what happens if you run out of the coagulator? is it easy to get more? thanks :)

Jamie - macadamia sounds awesome. We've done soy + almonds + coconut, and Andy seems to think that is the best for tea because it's a bit creamier. Adding 3 T. of oats to the soybeans also makes it super creamy and much thicker than normal, but it's kind of grainy that way...

Maija - yogurt making is defnitely on the cards, and we even have one of those yogurt incubators that we found at a second-hand shop a while ago. I'm hoping homemade milk is nicer than storebought in yogurt.

Sally Kitten - You can make nut milk but it isn't raw, because the machine boils for 10 minutes before blending. And apparently the coagulant is the same as epsom salts, which I think you can get at any chemist.

I've got a soymilk machine too, but I can't make a good tofu. I used to make tofu manually, but it makes a mess :/
Do you make a more concentrated milk to make tofu? And how much soy and water do you use?
Thanks! :)

We use the same ratio of beans to water when making tofu as we do for milk - 1 of their little scoops of beans (100 grams, I think), and fill the water up to the 1300cc line. I think the tofu setting doesn't cook as long as soy milk does, though, which may make a difference?

I have one and love it to bits. I make EVERY type of nut milk: almond, cashew, hazelnut, macadamia. I made hemp milk the other day and it is just divine. next, I will try pumpkin seeds, then sunflower seeds. The okara is already drained itself when the machine finishes. I think the trick is to pour out the milk straight away and not let it sit in the machine to cool.