Before it gets too late into 2011, I thought I should share some snippets from our post-Christmas holiday.  Although we had planned on doing a bit of work between xmas and NYE, Andy and I ended up doing nothing of the sort.  Instead, we read books (novels! not work-related books!) and watched movies.  There was sporadic rain, but we got long enough breaks to do a bit of adventuring.

We went on a bike ride up to Aplin's Weir and watched the water rush over.

We tried to venture further, but found the path and the river had become closely acquainted.

I got a bit of a muddy back, but it was good to get out between the storms.

Then we stopped in at Rowes Bay for some hot chips! 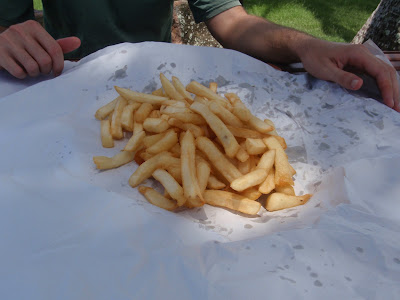 On yet another day, we biked in the other direction, to the railway bridge at Oonoonba.

As you can see, the river was still *pretty* full.  A few days later we took a walk to the Bowen Road bridge and the river had dropped by at least 2 metres.  I didn't take the camera with us, but it was pretty crazy how quickly it fell!  And good for me, because it means that the path to uni is bike-able once again and I don't have to worry about getting lost in annoying suburbs with curvy streets and endless cul-de-sacs.  But anyways.

When New Year's Eve arrived, we celebrated with a feast.  Rice paper rolls, all full of raw veggies and tofu... 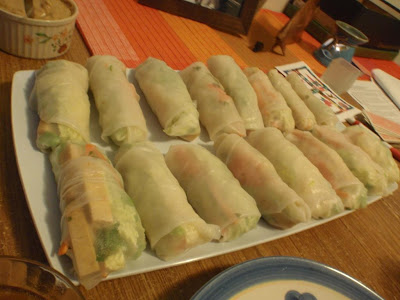 And steamed dumplings, fill with BBQ seitan filling.  They don't look that pretty, but they were light and fluffy and very tasty. 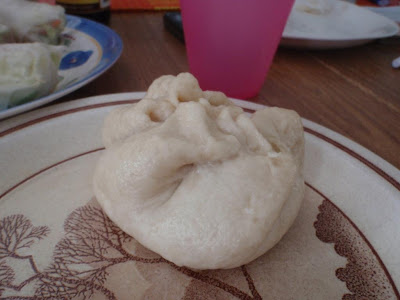 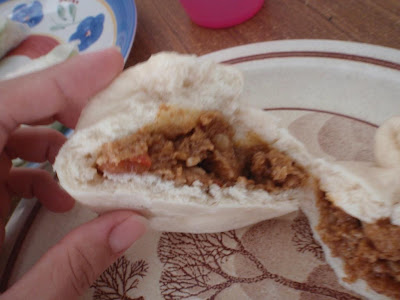 After dinner, our NYE was fairly mundane - some sparkling wine, some ginger beer, a few phone calls (to use up some bonus credit, of course), a trip to the street where we were able to see one of Townsville's fireworks from the 8pm display, and then The Truth About Cats and Dogs on telly. Given how much we had eaten, we were pretty sleepy, but we managed to stay up until midnight.

Maybe it wasn't what most people consider a fun way to spend a big party night, but at least it was in keeping with the very low-key nature of our week!
Email ThisBlogThis!Share to TwitterShare to FacebookShare to Pinterest
Posted by Theresa at 16:33

Oh yum. I love spring rolls and dumplings. I'm soon going to try to make some red bean paste steamed buns, I've had a jar of adzuki beans sitting in my cupboard un-used for months.

That Aplin's Weir looks awesome. I've never been up Townsville way. Not yet anyway :)

You should keep an eye on flight sales - sometimes there are really good deals between Brisbane and TVL. And while we're dry at the moment compared with most of the state, it's been wet all year so it's so green and beautiful at the moment! I hope you're keeping safe and dry down in Bris.

It is awesome when the river flows over the weirs, I love it, even if it does cut off a few of my options. Looks like an awesome NYE to me, nice feast!

I have to say, I've been crossing my fingers that you don't get affected by the rain and flooding up there. Stay safe and dry, my dear!

Also, Oonoonba? I love Australian towns and their crazy names!

those photos are lovely and the food looks scrumptious.

Those dumplings look so good, and they are pretty. My new years eve was quite the same, but with my family, I like low key celebrations. It would be awesome if you could post the dumpling recipe.

I want the recipe for those dumplings! The spring rolls look great of course. Those are my favorite. Looks like you had fun. You always know it was fun if you come back muddy :)

I think your dumplings look great! Hope the flooding is nowhere near you? Looks like a lovely New Year's feast!

Exploring round where you live is sometimes one of the best things ever. Does the river often flood?

You did better than us on NYE...we were asleep by 10pm!

I reckon we need to highlight the hot chip more in vegan blogs - seriously they are the best things ever!!

Hey, Townsville actually has 3 beaches. You should check out South Townsville. Nice sunrises there.

vko - the flooding starts about 500kms south of Townsville, so we're safe and sound up here.

Vaala - it doesn't take much for the river to flow over the weir, and every year it overtakes the bike path in at least a few places. But as for proper flooding, I've never heard of Townsville experiencing it! We get flash floods, and king tides, in certain suburbs, but I'm not sure if the Ross River has ever caused wide-scale flooding. Luckily!

Tubley - Do you mean the Ross mouth? I don't really consider that a beach; more a mangrove with a little sand. Really nice, though, I agree. I love going at low tide and looking at all the creatures that live in the sand.