I've mentioned recently how happy I am that Townsville is in its best veggie-growing season at the moment.  Andy and I have drastically slowed in our consumption of things like seitan, because we've just been eating veggies and more veggies for our meals.

One of the veggies that we pick up every now and again is the choko.  These are known in different parts of the world as chayotes, mirlitons, chow chows, pear squashes, and the list goes on.  Our most favourite way of cooking is to stuff it with a bready, seaweedy mixture and bake it for a while, so it's still tender-crisp.  I've tried making it a few different ways, though, so it's not the same thing over and over.  What we've discovered is that Andy likes choko best when it's just under-cooked -- overcooked it goes mushy and reminds him of those yellow button-squashes which he refers to as "those disgusting yellow shit things".  I don't mind them mushy, but definitely prefer them on the crunchy side, where they are more like a cucumber in texture.

One way we cooked them was to slice thinly and saute in lemon juice, garlic, and parsley.  We had these with mashed potatoes and crumbed seitan.  These were a little too undercooked, or else a little too thickly sliced, because they took a lot of jaw-effort to eat.  But they tasted good, and gave us a good idea of how good sauteed chokoes can be. 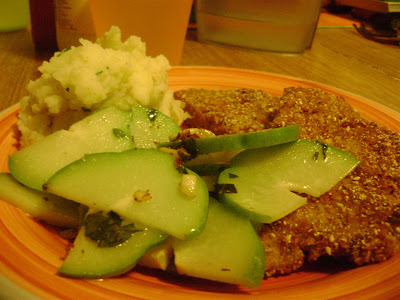 And, despite our previous experience with undercooked choko, I recently decided to try out a raw choko recipe.  The cookbook Tropical Vegan has a recipe for Cucumber and Chayote Slaw, which I followed somewhat.  It's more of a salad than a slaw, and it was good.  Very thinly sliced choko (put it in a bowl of water while peeling to avoid getting latexy hands), thin slices of cucumber, chunks of pineapple, and some spicy flavours mixed together into a surprisingly nice salad. 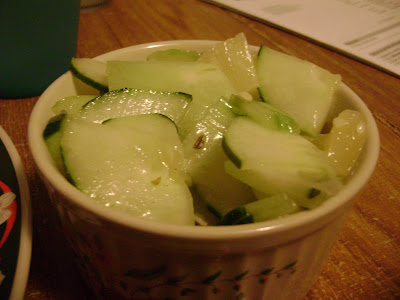 The thing about this salad, though, was that although it was tasty and nice to eat, it didn't make either of us want to go back for more.  So it sat in the fridge for a few days until we decided we had to finish off the leftovers before they spoiled.  In the future, I'll make a half-batch, or make this when we're having people over and are more likely to finish in one go. 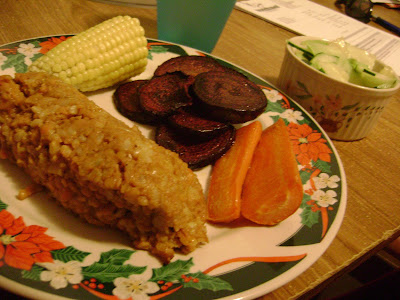 Served with lentil loaf, roasted beetroot, roasted carrot, and corn.  Yes, we eat on a christmas plate year round.
My plans for the future (when we have a house, with a garden, of course) are to grow chokoes, since they go well here and can be used in lots of different ways.  But for now, we'll keep experimenting with what we buy from the market.
Email ThisBlogThis!Share to TwitterShare to FacebookShare to Pinterest
Posted by Theresa at 12:17

I've never tried choko but will now! thanks for sharing multiple ways to cook them too, it made me feel much more comfortable trying it- at least I can pretend I have a clue! & I'll be sure to try them undercooked first.
I hear you on the garden, not that the herbs on the balcony aren't fun but I can't wait to grow bigger veggies too!
All the best

Chokoes are awesome. I'm dying to open the jam I made with them but I can't until I finish the apricot jam in the fridge!

That raw choko salad looks interesting. I might give that a go next time I have one :)

Ahhhhh, I keep looking at chokoes in the supermarket and then chickening out! Any chance you could sneak us the seaweedy recipe? That sounds magnificent!

Ooh Emma, I haven't tried chokoes in a sweet yet, that will have to be my next adventure!

Hannah - I'll pick up some more chokoes at the market this morning and stuff them this week so I can figure out a recipe and do a post :)

I've been doing that too but I haven't lost a pound since I started 4 years ago. My son says I am going to turn into a rabbit with all the veggies I eat.