Mango Trifle from the ground up

One of our December holiday "traditions" is to make trifle. We don't do it every year, and sometimes we make trifle outside of December, which is why I've put "tradition" in bunny quotes. But, we've had trifle a few times at Christmas, and we like it a lot.

This year we had an idea (okay, we saw it on Better Homes & Gardens) to put mango into trifle. We've got mangoes up the wazoo, so I decided to create a tropical trifle for Christmas this year. And I had an opportunity to pre-test it when I was asked to bring dessert to dinner at a friend's house.

Only trouble is, it was in the mid-high-30s, Celsius - and humid - the week I was due to make the pre-test trifle. So I didn't want to put on the oven to make a cake for the bottom layer. And since vegan cakes aren't so easy to find in Townsville, I couldn't take the storebought cheater's way out. I contemplated, and considered, and was finally struck with inspiration - pancakes! They are basically just like cake, and don't involve the oven. Since I cut up the cake layer of the trifle into chunks anyways, why not use pancakes?

So here is how we constructed our tropical trifle, from the bottom layer right up to the top.

Ground floor. Make a batch of pancakes. This can be done ahead of time. I needed 8 pancakes which were about 5 or 6 inches in diameter. When you're ready to build the trifle, sandwich two pancakes together with jam (mango, obviously). Cut them into squares and put in the bottom of the trifle bowl (we use a deep-ish glass baking dish). Sprinkle with a weensy bit (or a lot) of cointreau, or use some other kind of booze. 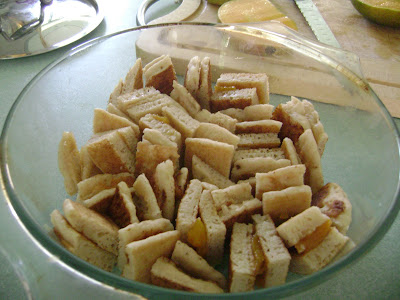 First floor. Cut the cheeks off of two mangoes, and cut them into chunks. Put these on top of the pancakes.  Give the trifle bowl a good shake to settle everything in together. 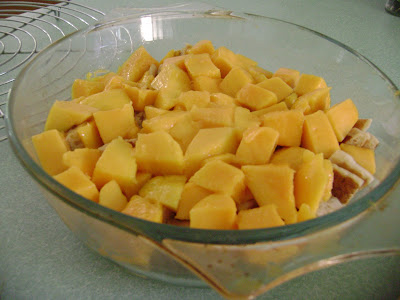 Second floor. Now, make some jelly. If you have an easy source of tropical-ish flavoured vegan jelly, lucky you! We don't. So I made some pineapple jelly using a tin of crushed pineapple and about 2 tablespoons of agar flakes. Soak the agar in just enough water to cover, and meanwhile boil the pineapple, juice & all, for 3 or 4 minutes. Tip in the agar and keep it boiling for another 5 or 10 minutes, until the agar fully dissolves. You can check whether the agar has worked by dipping a spoon into the pan and then sticking it in the fridge for a minute. It should set up obviously - if not, add more agar (I had to, I think because the acidity of the pineapple).  Pour this over the mango, and again give it a good shake to let it settle into the cracks. 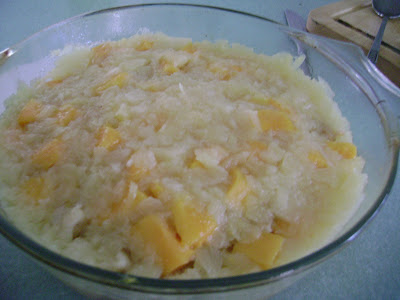 The tinned pineapple resulted in a layer of juice-jelly settling around the pancakes, and a layer of fruit-jelly sitting on top of the mango. I kinda dug it this way, but Andy's mum & grandma & aunties all set the jelly in a separate pan, break it up with a fork, and then put it on top of the fruit, so I will do it this way for the Christmas trifle. 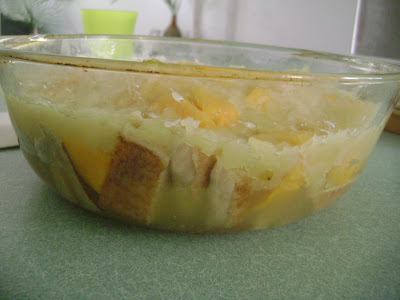 Third floor. When the jelly has cooled a touch, add a sliced banana. Or whatever other tropical fruit you have and like. 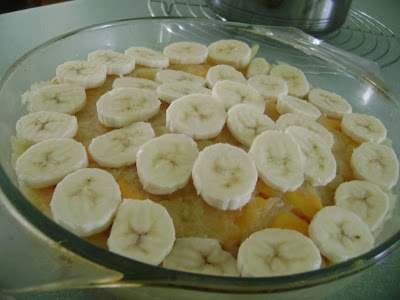 Penthouse. Make custard. I used the recipe from Joy of Vegan Baking, with a few alterations. In a jug, mix 1/3 c. raw sugar, 2 T. plain flour, and 4 T. corn flour (corn starch). Open a 400ml can of coconut cream (sold as, I believe, coconut milk in the US - cream of coconut is something else involving sweet). Whisk about 1/4 c. of the coconut cream into the sugar until smooooooth. Heat up the rest of the tin of coconut cream, plus a smidge of water to rinse the can, over medium-low heat. When it's at a simmer, tip about 1/2 c. of the hot coconut milk into the jug, and whisk again until smooth, then tip all of that into the pan. Cook and whisk constantly until it's nice and thick, and then turn off the heat and whisk hard for 30 seconds. Then pour, gently (don't want to mess up those carefully placed bananas!) onto the top of the trifle.  Smooth the top, cover with cling wrap, and chill. 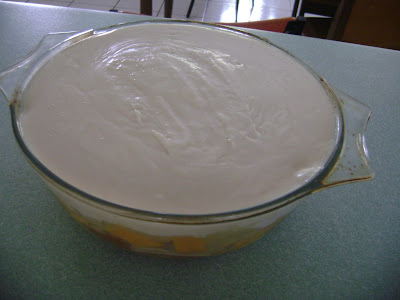 Admire the layers. Add toasted coconut on top, if you can be bothered. Or don't. Consume. 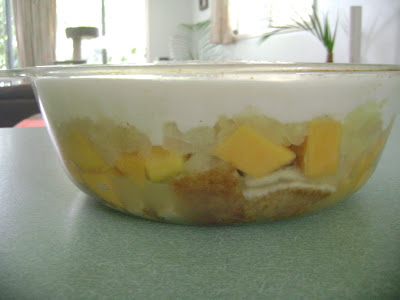 Email ThisBlogThis!Share to TwitterShare to FacebookShare to Pinterest
Posted by Theresa at 15:27

I was looking forward to hearing how you would make your trifle - and I've learnt so many things in one post that I'm almost overwhelmed (in a good way!). The pancakes instead of cake appeals to me hugely, as does the mango (BH&Gs has some benefits :) ), and the vegan jelly and custard ideas are really useful as I would have struggled with making either as vegan versions. Thanks!

Pancakes instead of cake or sponge biscuits is BRILLIANT, my dear Mango Queen! I love how many different ways we can make trifles. My mum and I often make little individual trifles in long glasses (Mum calls them parfaits), topped with sugared almonds. I'll have to hint to her about a mango option soon :)

my brain just exploded, pancakes, mango etc. I really need to make this!

This looks awesome! My mum used to make trifle every year and I liked most of it but hated the cake layer on the bottom. I love that you used pancakes in yours and the other tropical flavours.

I am SO drooling right now, Theresa. All I have are frozen and/or pasty mangos. Best always to use what's loval and in season.

Merry Xmas to you and Andy!

The meaning of this is that you actually burn fat by eating Coconut Fats (including coconut milk, coconut cream and coconut oil).

These 3 studies from big medicinal journals are sure to turn the traditional nutrition world around!