On Friday I received the 10th Anniversary Edition of Joanne Stepaniak's Ultimate Uncheese Cookbook. I know this is an older cookbook that many people have seen, but if you haven't--Go get it. This cookbook has only been in my life for 5 days, and it's already been rocking my world. I was expecting the recipes to be all vegan cheeses or vegan versions of cheesy dishes, but she also offers alternatives to cheese (for example, using avocado in place of vegan cheese). And while there are many recipes for block uncheeses and uncheese dips and spreads, there are tons of recipes for pasta, baked goods, and even desserts. Here's what I've made so far....

Buffalo Mostarella, from the Block Uncheese chapter. This uses oats and cornstarch to set, but I think I didn't cook it for long enough. I was worried it was sticking and burning, so I took it off the heat but I should have let it get super stiff. 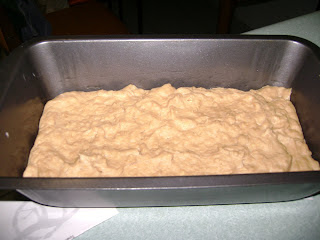 Here it is in the pan where it was supposed to take shape. Instead, it's more like a spread, but it's tasty. My one complaint--holy mother of god, 1 T. of onion powder! Maybe Aussie onion powder is more concentrated than American, but according to the pack of onion powder 1T. is the equivalent of three onions. Next time I'll cut down on that. 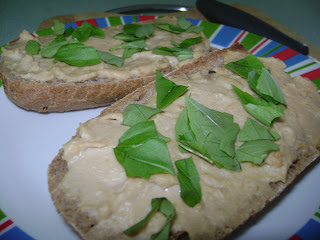 Buffalo Mostarella spread on rye bread, heated under the griller, and topped with fresh basil. Yum! 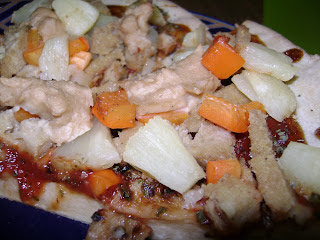 Buffalo Mostarella in blobs on top of pizza. It didn't really melt, so it meant getting a mouthful of uncheese every now and then. In the future, I'll spread the uncheese on the crust in an even layer, probably under the sauce. 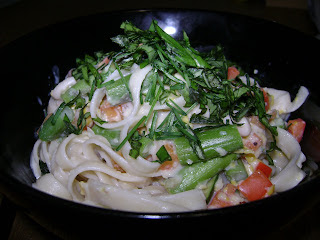 Fettucini Alfonso. Instead of lots of fat, this cream sauce relies on blended cannelini beans for its creaminess, and corn and tahini for its flavour. A very mild tasting sauce, we matched it up with sauteed zucchini, capsicum, and fresh asparagus. Topped with generous amounts of fresh basil and garlic chives. Yum. 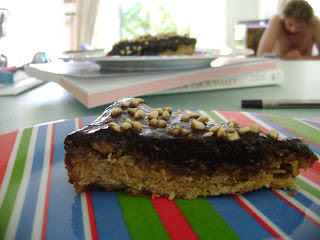 A black sapote pie. The crust is Granola Nut Crust from the dessert section. Super simple, deliciously sweet and nutty, this crust was the star of the pie. I baked it till golden, then filled it with a mixture of black sapote and mango-flavoured silken tofu.

The sweetness of the pie crust matched beautifully with the mild flavour of the mango-sapote filling. Here it is, nestled amongst some banana-melon sorbet. 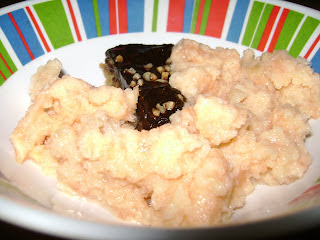 In addition to great recipes, this book has a really interesting foreword about dairy, and why it totally sucks ass. It focuses mostly on health, as its written by a doctor, but it also examines the ethical and environmental aspects. Get this book!
Email ThisBlogThis!Share to TwitterShare to FacebookShare to Pinterest
Posted by Theresa at 08:03

wow, between the Buffalo Mostarella (1 T. of onion powder! whoa! that's a lot, haha) and the Fettuccine Alfonso, that UnCheese book definitely looks like a great buy! Oh and that black sapote pie? looks delish!

We've got that book. I've found the best section is the crusts for pies, etc.

We're trying a few more recipes as we go, but we have so many vegan cookbooks now!

Is it unbearably hot in T'ville yet?

Ok, I've always been vaguely afraid of the uncheese cookbook, but your good review makes me think I should give it a second look!

I'll take a look at this. It may help me get over my aversion to cheese substitutes!

oh, all your unchesse meals look yummy! and I love that the book has a foreword about how evil dairy is...

I've been wanting to try fettuccine alfonso ever since I went to a Chinese restaurant and had a delicious corn-cream sauce, so I'm glad to hear you liked it.

yeah, i love that book! when i first got it, i made the mac and cheese and it was pretty good!

Great book and I have found the recipes very handy with a lack of commercial Vegan cheese here.