Given that today is the first official day of spring, I thought I would kick off the unofficial Month of Food with some local produce.

Last spring, Andy and I tried to take advantage of Townsville's sunny climate by growing things. We planted capsicums, tomatoes, and an eggplant, in addition to our normal herbs and pineapple. Everything grew very well, and within a few weeks we had flowers. But, it got too hot, or too humid, or something. The flowers bloomed and then fell off without setting into fruit. We eventually got two measly capsicums before those plants died in the wet weather of November to February. The eggplant succumed several months later. But the tomato held on strong. It was taller than me, and bushy--full of big green leaves. It wasn't until June this year--8 months after we planted it--that our first tomato flowers set into fruit. We watched and waited patiently as the first tomato grew and turned yellow, then orange, and finally bright red. Sure, it looked a little funny, but it was our own: 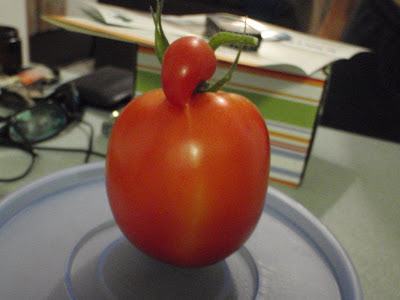 Since then, we're getting a slow trickle of tomatoes off of that plant, but none as unique as the first. 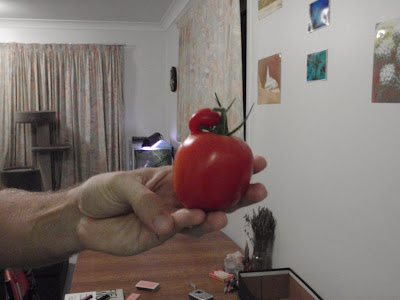 Realising that our back garden (if you can call a narrow, paved strip covered in shadecloth a garden) was not really suited to summer growing, we decided to plant some winter crops. In went some silverbeet (chard), some radishes, and some dill. Of the three, the dill was the only success. Now we're rolling in fresh dill and I love it. The silverbeet died from lack of sunlight. And the radishes struggled along, occasionally providing us with the odd leaf to add to a stirfry or pasta sauce. Eventually Andy dug them up, and this was what we got. 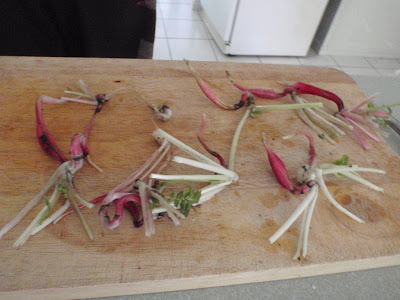 Sure, they were small, but they roasted up just fine.

Despite our lack of success, others around us somehow manage to grow gigantor, mutant produce. On our recent trip north, we stopped at a produce stand on the way home, just outside of Innisfail. They were selling 5 bananas for $1, so of course Andy chose the five biggest bananas on the pile. We ended up with four twins and one triplet banana. 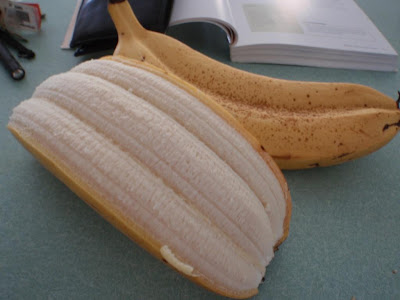 These were BIG bananas. And they got ripe very quickly. To use up the triplet, I flicked through my under-utilised copy of The Tropical Vegan Kitchen and came across the Sweet Potato and Banana Casserole, I think from Jamaica. This was pretty simple to do--mashed sweet potato and banana, mixed with a jalapeno chilli, topped with peanuts and coconut. Then baked. 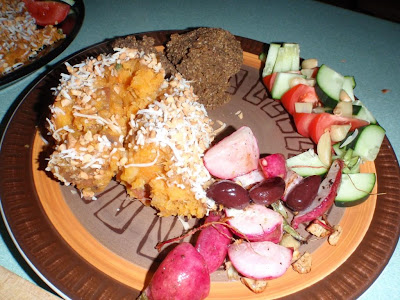 I had high hopes for this dish, and it would probably be good as a side dish in a holiday meal. We served it with falafels, roasted radishes and salad. It was okay, but just a bit... banana-y. Too sweet for a main meal, despite the spicy jalapeno mixed through.

Failures aside, Andy and I are relentless in our attempts to make our back space productive. I've got plans to grow a bag of potatoes, as DJ - Skint Vegan has recently done. Our dill is rolling along, we've got chilli plants getting taller by the day, and a baby pineapple has appeared.

Happy spring everyone!
Email ThisBlogThis!Share to TwitterShare to FacebookShare to Pinterest
Posted by Theresa at 08:13

Lily on the Road said...

Shut the door, I know what I'm making for dinner tomorrow night now....holy yikes, I've got all of the ingredients in my home as we speak! Well except for the triplet bananas, my are singular....Wow, thanks and HAPPY SPRING!!!

Lily on the Road said...

BTW, I'm never first and BTW your tomato has a handle on it! ;^)

That tomato is so cute! Good luck with your garden. We're attempting to plant veges now too.

Wow, I've never seen bananas like that! It's crazy!

So glad it's finally spring :)

I love seeing what other people are growing in their garden.

Ha. First day of spring and I'm back to wearing a jumper - FAIL!

It's like there's a teeny head on top of a tomato body with crazy green hair... love it!

That is some crazy produce!!! Enjoy your onset of spring!!