After the wedding, Andy and I spent another day with our families north of the Daintree River at Cape Tribulation, and then drove ever so slightly southwest, to the Atherton Tablelands for a week of honeymooning.  The Tablelands is the site of some formerly very active volcanoes, so is characterised by hills & mountains, funny geological formations, streams, lakes & rivers, and waterfalls.  And I will get to all of those things in due course.  But most excitingly, the volcanic activity has led to very rich soils.  This couples with the fact that, although located in the tropics, the Tablelands are between 700 - 1000 metres above sea level and thus get much more in the way of seasonal variation than you might expect (in 2007 it got to -12 degrees in one town!).  As a result, they can grow lots of exciting things.  The tourism info talks a lot about "food trails" you can go on in the Tablelands, but these are paid tours and focus heavily on dairy, so Andy and I made our own food trails, starting in Cape Tribulation.

The Cape Trib Exotic Fruit Farm has daily tastings/tours and guarantees at least 10 exotic fruits on the menu.  This was the bowl of fruit awaiting us:

Andy and I had tried many of these before -- the only unfamiliars were breadfruit, chompadek, Davidson plum and white sapote.  Breadfruit was not in season, but they freeze enough to last the year and serve it as baked chips, which were delicious.  Chompadek isn't as good as it's bigger cousin Jackfruit, in my opinion; likewise, white sapote is not one of the better sapotes we've tried.  The Davidson Plum was interesting, though -- an Australian native, it had a beautiful colour and a tart flavour that would be good in jam.  However, I was more than happy to get my hands on some more rollinia, which is described as a lemon meringue fruit -- lightly citrusy in flavour but gorgeous and creamy-custardy in texture.  It's a shame it bruises so easily and thus isn't for sale commercially.

Rollinia on the tree
On the drive to our first accommodation stop, we detoured through Mareeba.  Formerly a big tobacco area, Mareeba now grows lots of mangoes, sugarcane, and paw paws, but is also home to a few coffee farms.  We opted for the one with the cheapest tour -- Jaques Coffee Plantation.  We were really happy with this tour.  For $15 we got a free coffee (and some snarky comments about how soy is meant to be bad for you from the cashier...), a video about the history of the place, a tour around the farm on a big red truck called The Bean Machine, and a taste-test of three coffee liqueurs.  The video and tour were lighthearted, sort of taking the piss out of serious tours, and were a mix of family video, cheesy graphics, and anti-government sentiments mixed with information about the history of coffee and the processing of it.  We ate some fresh red coffee beans.  But the best part was the coffee liqueurs.  There was one, similar to Bailey's, which I really loved, made creamy with coconut milk instead of dairy.

On the Tablelands, there are many roadside stalls selling fresh produce.  We went to a well established one called The Humpy - Nut World.  This incorporates lots of different nuts, local fruit & veg, and a corner of gluten-free groceries.  Here we got some dragonfruit, which the cashier informed us is sugarless and thus good for diabetics. 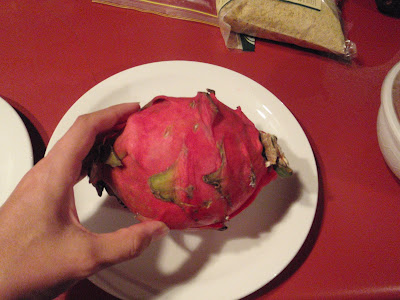 We've had dragonfruit before, but not often, and that is something I want to rectify.  This one was a gorgeous bright magenta inside and has the most beautiful, delicate flavour.  Texturally similar to a kiwifruit, but the flavour is more like a mangosteen or an abiu. 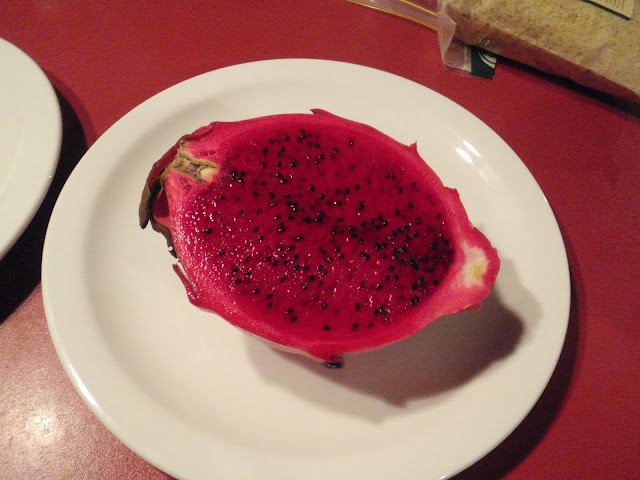 From Humpy Nut World to the Peanut Place!  Here, they sell peanuts of all different flavours, all available for tasting and many dairy free, from caramel to salt & vinegar.  They also sell fresh peanut butter, made from peanuts grown across the road, which is a peanut butter revelation.

In Yungaburra, we got some African Horned Cucumbers and some Manelos (a cross, apparently, between an orange and a pommelo) from a suburban fruit grower.  The cucumbers were bright green inside and were on the verge of sweet -- definitely not what we expected, but good nonetheless.  And the manelos were so juicy and flavoursome. 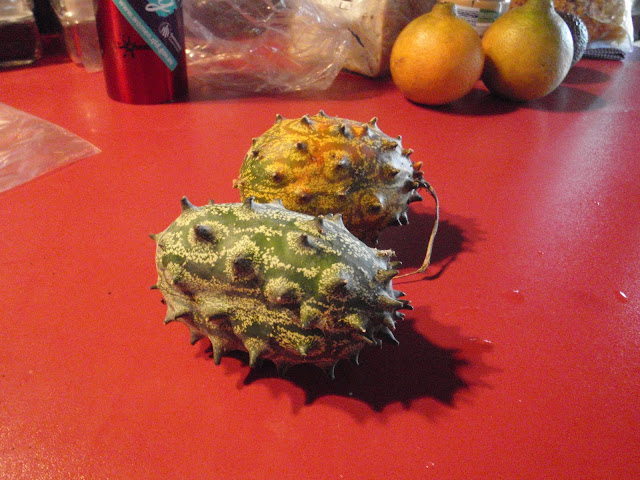 Finally, we found ourselves in Malanda at the Nerada Tea Plantation.  Andy and I often buy Nerada because it is the cheapest, but we didn't realise that they grow (most of) their tea in Australia.  The tour here was interesting, but was a little heavy on the whinging about the tough market.  Still, we got to go inside the factory and see tea being produced, which was pretty cool.  And the factory fresh tea we had afterwards was much nicer than the storebought kind, which is often at least six months old by the time it hits a teapot.

And that wraps up our food-ventures in the tablelands.  There are more foodie things to do -- a distillery, some wineries, a strawberry farm... but we had our fill, so to speak.
Email ThisBlogThis!Share to TwitterShare to FacebookShare to Pinterest
Posted by Theresa at 12:35

You lucky girl! I would love to go on the tour! We don't have anything like that here. We have a pineapple tour? All the fruits look beautiful!

Thanks for the tour! The dragonfruit is beautiful!

That is a lot of amazing looking fruit! Keep an eye out for Blue Kitchen's Davidson Plum Jam, we sell it - it's lovely!

I loved dragonfruit in Vietnam but the ones I've bought in Sydney have been underwhelming and definitely not as colourful as the one you had.

I feel like you're in another country with the tropical fruit you're enjoying :D

I almost forgot we also got bread from a landmark institution -- Queensland's highest bakery in Ravenshoe, 930 metres above sea level. It was a soy-linseed loaf, and tasted pretty much like bread. But noteworthy no less!

I'm happy you had a such a wonderful "foodie-moon." All the fruit looks wonderful. Once in awhile, they sell dragonfruit here in markets. I'll have to pick one up next time.

Each time I read your blog, I realize I NEED to get to Oz pronto. Seems like a paradise in many respects.

Lemon meringue fruit? Be still my beating heart! What a fabulous addendum to your wedding day :) Though I assume you were devastated that the Mareeba area isn't still a big tobacco producing area. You and your daily cigar habit. *shakes head*

This looks like an amazing experience! I'm anxious for my first tropical travels just to eat all the fruit!

The meaning of this is that you actually kill fat by consuming coconut fat (also coconut milk, coconut cream and coconut oil).

These 3 researches from large medical magazines are sure to turn the traditional nutrition world upside down!