At the start of 2010, I decided that this year would be the year I:

I have tried the first one but I still have a tendency to wake up much earlier than I need to.  The second one is hard, but I cart around my stainless steel water bottle and drink out of glasses from home.  But the last one I've made definite progress on.

I first tried to tackle this recipe several months ago.  I had an idea for beetroot gnocchi, so I steamed up some beets and potatoes and was all ready to go, when I broke the (brand new) potato ricer.  Blurg.  We returned it, but it took months for the shop to sort themselves out.  Finally, we got a new ricer and decided to take another stab.

Using the recipe for sweet potato gnocchi from Urban Vegan, I baked, mashed, kneaded, rolled, cut and shaped my gnocchi.  It is time consuming, but not too difficult.  For my first go, though, I was a little nervous of the gnocchi falling apart while boiling so I decided to pan-fry them instead. 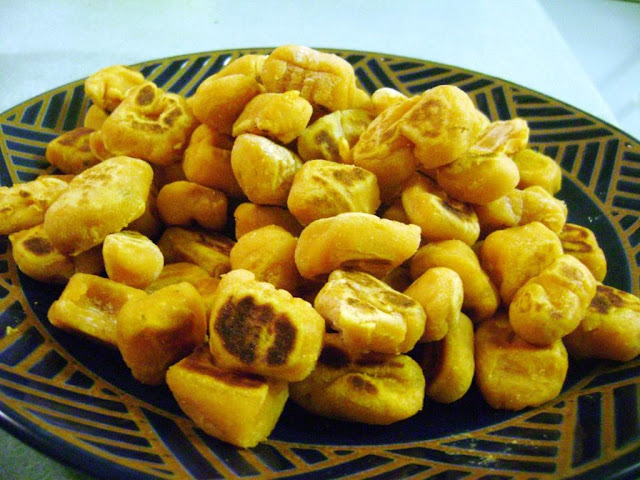 This was good, but took a little while because the flour needed to cook.  After the gnocchi were done, Andy threw some onions and radish greens into the pan and then tied everything together with pesto and olives.  It was delicious! 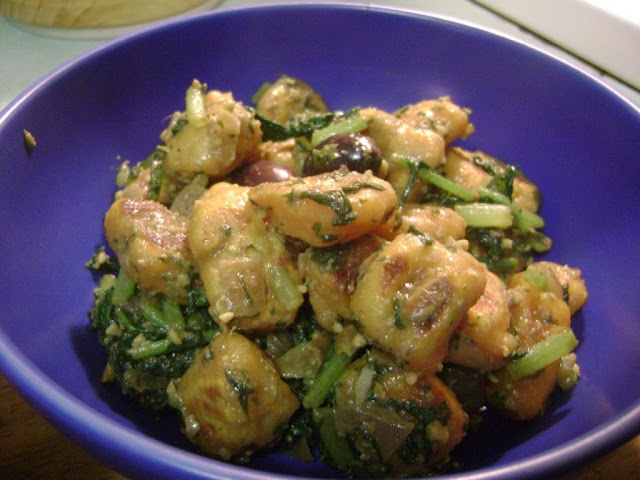 We have made plain gnocchi since then and will be doing it again in future.  But from now on, we'll make double batches to freeze, because it is kind of a long process.
Email ThisBlogThis!Share to TwitterShare to FacebookShare to Pinterest
Posted by Theresa at 08:05

Ahhh! Those pan-fried gnocchi look so cute! Up until last year, I'd never had gnocchi. I had some at a restaurant and thought they were quite good, but after having some in Italy I realised that the Belluci's version were nothing but stodge. These look more like the yummy Italian kind :)

(Also, I adore potato ricers. I refuse to make mash any other way :D)

Oh, and I too once decided to learn how to sleep-in. Unfortunately, I "learnt" to do so by not going to sleep until 1-2am. Not a good move.

Looks like the long process paid off - these look professional and delish! I have to agree with Hannah, my sleep habit is directly correlated with my bedtime. Agh!

Gnocchi is somthing I want to get better at! Your loook great! Good Job! And as for sleeping in... I wish, but I have 3 little ones that all get up at the crack of dawn! :)

Oh wow tasty looking! I love gnocchi! I've never made them from scratch, but I definitally want to try.

I LOVE Gnocci..but do not eat it often--I NEED to get that recipe into my greedy lil fingers! YUM!

Oh, and I have mastered the art of sleeping in this year...the long, dark cold winter we had here helped update my sleeping patterns a lot ;-)

the gnocchi looks cool. Love it. especially with cheese. I’m in love with noodles and pasta, too It’s Yummy and simply iresistable. But the thing I’m afraid is it contains so much carbohydrate. But now I found a new way to replace normal Pasta and noodles. Do you know about Vietnamese brown Rice noodle? It’s 100 percent good for your health. So thrilled to come across this Vietnamese noodle soup Happy Pho. It takes 15 mins for me to cook & has super healthy ingredients, so it’s tasty and doesn’t make me feel terrible afterwards like a lot of Asian prepackaged products. I found it at Whole Foods Berkeley but I think they’re at a bunch of other stores too http://staranisefoods.com

I have to give it another go. My gnocchi never turned out. They always ended up too tough or too chewy.

Gnocchi has been on my list of things to make for ages (quite possibly for several years) but I still haven't tried it!

Sleeping in isn't going well for me either...make that sleeping in general really.