As I mentioned in my last post, I was just in Sydney for a few days at a sociology conference.  There were about 400 people at the conference, and a fair chunk had a yellow sticker on their name tags indicating some kind of special dietary preference, mainly vegetarian (and a few gluten-frees).  Probably nearly half of the people I saw had this yellow dot.  But instead of having half the food be vegetarian, they had a separate table set up, with a volunteer guarding it to ensure that no one without a yellow dot took any food from it.

On one hand, I appreciate having a separate table, so there is no question of the vegetarian-ness of the food.  But on the other, if so many people want to eat vegetarian sandwiches, regardless of their dietary preferences, I kinda think that indicates a need for more vegetarian food all around.

The other really very annoying feature was that it was unclear if any of the sandwiches and wraps were actually vegan.  I did some investigating, and some questioning, and found a few wraps at each lunch that were vegan.  Except, on the last day of the conference, there were a total of zero vegan options.  What the hell?  I paid a lot for conference registration, and all I got to eat was fruit!  And morning and afternoon tea breaks were full of cakes and pastries, but none of them were vegan, either.  I ate a lot of fruit while I was in Sydney.

On the last day, in frustration, I went over to the food court at Macquarie Uni, where there is an Iku Wholefoods.  Andy and I got some Iku food when we were in Sydney in February, and you can read other reviews from K&Toby and Lisa.  When I went previously, I thought it was overpriced, and I felt rushed in ordering because we were at a crowded city food court.  This time I was much happier with it - I ordered the two snack plate, which was a giant rice ball and a tofu, noodle, and veggie-stuffed rice paper roll, for $6.90.  I didn't take photos, because I brought the food back to the conference, so these are from the Iku website. 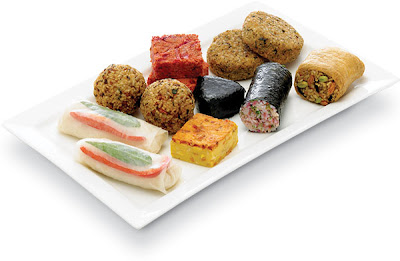 The rice paper rolls and rice balls are pictured on the left of the plate. 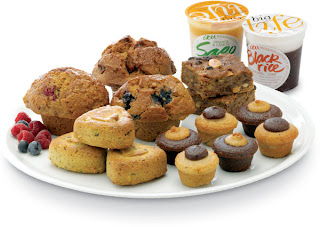 I also got a marabba, a sort of pistachio-biscuit, the triangular item at the front of this plate.  It was not that good, really - a bit dry.

Aside from the food, the conference was good - I met lots of people, heard some interesting talks, and had lots of wanders through the Macquarie Uni campus.  It was full of adorable creatures, like this bunny (I realise these are pests, but they're still cute).

And this family of ducks.

And on Thursday, when the conference had finished, I went into the city and had dinner at Peace Harmony with my brother-in-law.  He snapped a photo, so I will wait until he sends that to write a proper review of the excellent, magnificent meal we ate there.  While you're waiting, you can read reviews of Peace Harmony from Toby or Michael.  It was a gorgeous night in Sydney, so we continued down the hill to Darling Harbour and found a bar stool with a nice view and had a drink.

Then it was back to Townsville bright and early the next morning!
Email ThisBlogThis!Share to TwitterShare to FacebookShare to Pinterest
Posted by Theresa at 10:28

What a drag. Conferences can be such a let down when it comes to catering for vegans. The last one I went to actually had quite a good little vegan plate made up for me for lunch, but morning and afternoon teas were just pastries and baked goods, not even fruit!

At least you got some good vegan food while you were there. I love Iku, but didn't get a chance to go when I was there the last time. I have never been to Peace Harmony either.

That's just ridiculous! 400 people and not a single vegan option? For heaven's sake, it's not hard to put together a wrap or a sandwich wthout cheese or whatever. Hmph! Even as a technical omnivore, I find the food at things like this pretty uninspiring. I wonder how it will be at the food symposium I'm at in Adelaide this week?

As a perennial conference organiser I am starting to rebel against the 'usual menu'. I will now order 50% vegan regardless of stated options. I don't eat a lot of fat, so I am always dismayed at the eggy, cheesy "vegetarian" stuff. And don't get me started on deep fried!!

my word is "conic", how very cartographic!!

The Rise of Telepresence Technology
http://blog.whizmeeting.com/?p=320