Our Christmas dinner in the past few years has been a stuffed seitan roast, and thankfully they have been steadily improving every year.

In 2007 it was a bit chewy, made with nothing but gluten flour and liquid. In 2008, I incorporated pumpkin into the mix, and the texture was a bit less chewy but still fairly heavy.

For 2009 we had two roasts - one with friends in Townsville, and one with Andy's family in New South Wales.  Both incorporated chickpea flour, which made the texture much lighter and, I think, more pleasant. 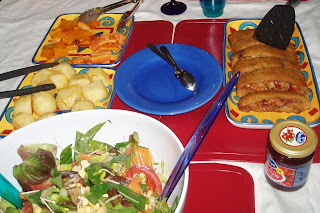 Andy and I both agree, though, that this year's roast was heaps better.  First of all, it used okara in the seitan mix, which makes the texture less gluten-y and chewy.  Second, it was steamed, so it was nice and firm, and the stuffing became a part of the seitan instead of falling out.  And finally, we wrapped it in yuba before the final roasting, so it got a crunchy-chewy skin on the outside.

Here's a step-by-step guide to how we created the best seitan roast yet.

First, make the stuffing.  We were out of onions, so this was a no-cook stuffing, which was fine with me considering the heat and humidity on the day I did the cooking.

In a large bowl, pour vegetable stock and cointreau over the bread pieces and stir up.  Let sit for 5 to 10 minutes, then mix with the remaining ingredients. 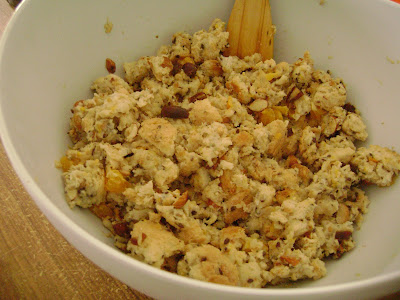 Then make the seitan.  Andy printed out this recipe and can't remember where he'd gotten it from, but we've changed it up so I'll repost here - sorry I can't credit it!  This can be made in advance, making it a great recipe for a busy christmas.

In a large bowl, combine almond meal, okara, stock powder, soy sauce, oil, water, onion powder, nutritional yeast, garlic, salt, pepper, rosemary and thyme.  Blend until completely smooth with a stick blender (or put all of this into a blender or food processor and do it that way). 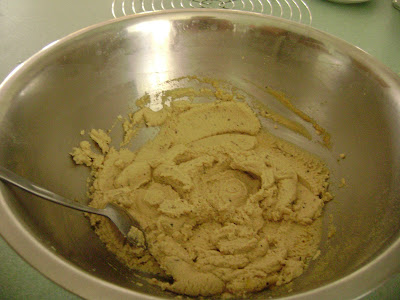 In a separate bowl, stir together gluten flour and cornflour, then add this into the okara mixture until fully combined into a soft dough.  On a plastic mat, or a sheet of baking paper or cling wrap, roll out the seitan dough into a rectangle, a bit less than 1cm thick. 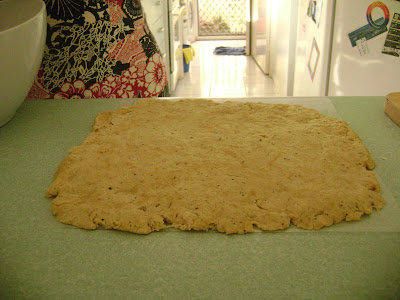 Place a mound of stuffing in the middle of the dough and compress this with your hands so it is pretty firm.
Fold up the sides of the seitan dough, closing any cracks that break.  Press the seams together well.  Make sure the log is short enough to fit inside of a steamer. 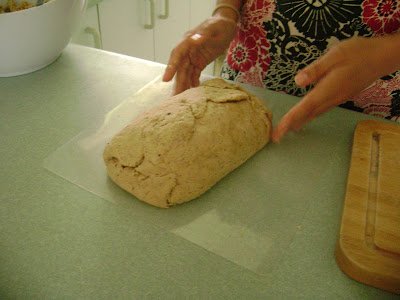 Wrap the log in baking paper, and then muslin or cheesecloth.  Place into a pressure cooker filled with 2 inches of water and a steamer basket.  Bring up to the highest pressure and steam for 15 minutes (or steam in a regular pot for about 2 hours, turning every now and then and refilling the water when necessary).  Let cool, still wrapped up, and then store in the fridge until needed. 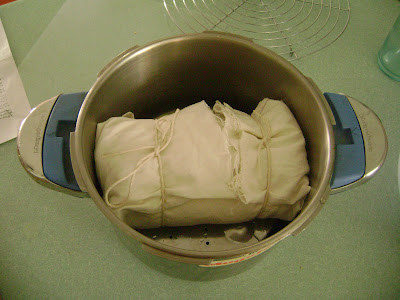 When you're ready to roast the seitan, unwrap it. 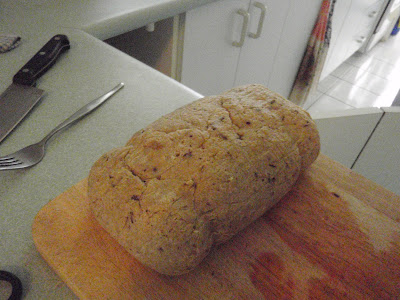 Take a few sheets of yuba, soak briefly in warm water, and wrap this around the roast. 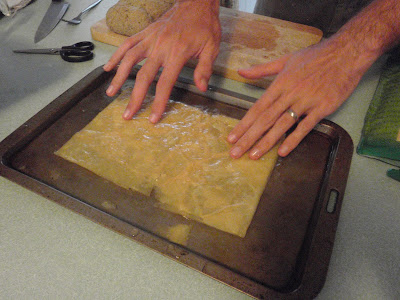 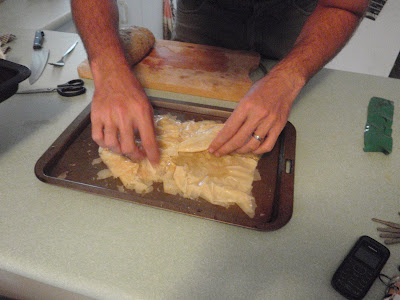 Our yuba was a bit fall-aparty, and not a great size, so it kind of looked like a dog's breakfast.  Just do what you can to wrap the whole log and tuck in any stray bits around the edges.  Baste the roast with a mixture of 1 T. oil and 1 tsp. soy sauce.  Roast at 200 (400F) for 40 minutes, basting every 15 minutes or so.  We added cranberry relish to the final baste, to give the skin a fruity flavour. 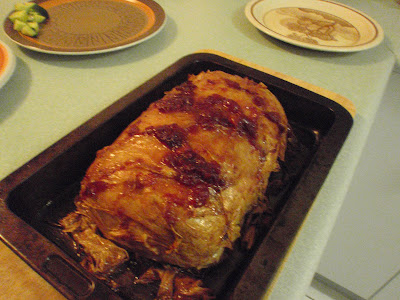 Let stand for 5 minutes before slicing and serving. 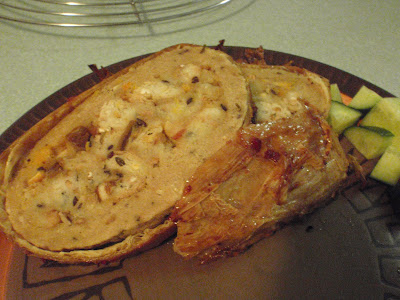 The result is a firm, flavourful roast with a great texture and a crispy skin.  And, really, it wasn't that hard.  I think this is something that won't just be relegated to Christmas dinner in the coming years...
Email ThisBlogThis!Share to TwitterShare to FacebookShare to Pinterest
Posted by Theresa at 10:30

I've been super-keen to try a yuba-skinned roast since Lena first mentioned the concept to me last Christmas!

Thanks for this step-by-step guide, I'm bookmarking it for my future roasting attempts. :-)

This looks amazing! Can't help feeling it's completely out of my league, though. I'd probably better stick with simple cookie recipes, and leave the seitan masterpieces to, well, the masters ;)

looks lovely! You look like you have become a pro at seitan roasts!

That looks VERY good. I have been silently reading your blog for a few months now, and have just started my own NZ veggie blog but I have to admit that i have never tried seitan. Its a bit embarrassing to admit. I know I would LOVE it, from the ingredients and the pictured results, and I am going to give it a go real soon! Will keep you posted!!
:) Rachel

Get all your favorite spirits and wines on Duty Free Depot!