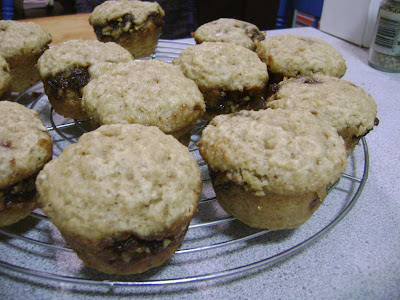 When it's not apple, pear, or mandarin season, I like to keep a stash of muffins in the freezer to bring in to work for a mid-morning snack. Andy eats his with his lunch, but I'm usually starving by about 9.30am. I try to hold out till 10 or 10.30 so I don't get hungry for lunch too early, but regardless, I would be nowhere without my morning muffin.

Last weekend I decided, after some serious deliberation, on Banana Streusel Muffins - combining an adaptation of the streusel recipe from the 'Pecan Streusel Coffee Cake' in Urban Vegan with an adaptation of 'Wolffie's Banana Blueberry Muffins' from La Dolce Vegan.

But then, a hiccup. We didn't have enough flour. Andy offered to pick some up on his way home from Bunning's, the hardware store mega-chain.

But then, another hiccup. We remembered the grocery stores don't open till 11am on Sundays. This was at about 9am, and we had people coming over for lunch at 12. I decided to just go to the shop afterwards, but Andy saw my determination  to bake and called his friend Tom, who was coming for lunch, to borrow some flour.

Thanks again, Tom! (I repaid him in a muffin.)

I'm glad we did borrow the flour, because I wouldn't have felt like walking to the store in the afternoon. And these muffins were a delicious success, so it would have been tragic not to make them. Andy and Tom both thought they had apple in them - I guess because the flavours are all typically paired with apple. But just bananas here! 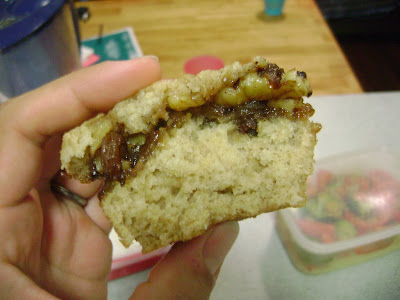 To make the streusel, mix all the ingredients in a bowl and set aside.

Then preheat the oven to 190 (375F). Lightly oil a 12 cup muffin tin. In a large bowl, mix the flour, baking powder, cinnamon, salt, and sugar - make sure there are no lumps left. In a jug with a stick blender, or in a proper blender, combine the milk, banana, ginger, oil and molasses and blend until smooth. Add the banana milk to the flour mixture and stir until combined.

Drop spoonfuls of batter into the muffin cups, filling a bit less than half full. Then put a spoonful of streusel mix. Top with another spoonful of muffin batter.

Bake for 22 minutes, give or take a few, until they are golden and cooked through. Probably put your muffin pan on a baking tray, because when I made these, this happened. 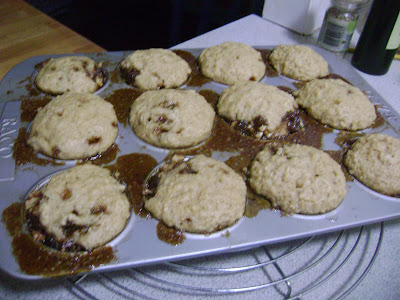 Andy seemed to enjoy scraping the hot toffee off the pan and eating it, and after letting the muffins cool for about 20 minutes they came out pretty easily. My advice is to loosen the edges while they are fresh from the oven, but don't take them out until the streusel hardens up a bit - otherwise you will lose your tops! 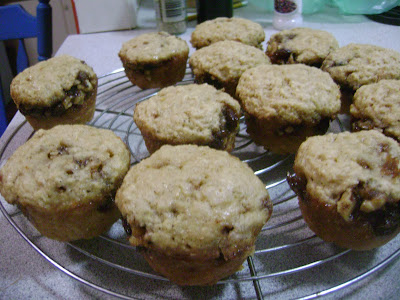 Email ThisBlogThis!Share to TwitterShare to FacebookShare to Pinterest
Posted by Theresa at 16:52

Those look great, I need to use up frozen bananas and will give these a go. I too have a 9:30ish muffin habit from walking the dogs at day break and then cycling to work. A healthy muffin is nice and filling so I survive til lunch!

Love that you added fresh ginger!

I too am glad you got the flour! I've had plenty of banana muffins, and apple streusel muffins, but never banana streusel - but I think I'd love these.

If I pop around with some flour, do I get a muffin as well? Maybe two?!

These look so good! I also try to pretend my muffins are healthy breakfast food by using a bit of token wholemeal flour :)

I made these today, yum!

Nice post, I bookmark your blog because I found very good information on your blog, Thanks for sharing
Quality Services & Training Pvt.Ltd.