Andy and I were invited to his friends' house for a board game night / potluck extraveganza. I thought about easy-to-bring potluck food - Andy suggested rice & beans, but I didn't want to be too boring so I settled on jambalaya! (I have a hard time saying or typing that word without an exclamation mark.) I used the recipe from Celebrate Vegan by Dynise Balcavage, except that instead of tempeh bacon & veggie chorizo, I used tvp, black beans and chickpeas. To make up for the missing flavours that fake meats would have contributed, I also added some liquid smoke, extra chilli powder, and paprika. The verdict: "It's amazing how vegans & vegetarians can make such tasty food without using meat!" -- success, I think. 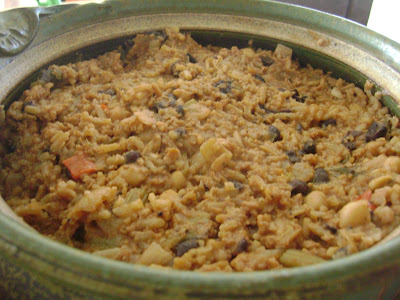 For extreme ease, we made this the day before - to give the flavours a chance to meld, you see - and packed it into this really lovely casserole dish Andy's mum has given us. 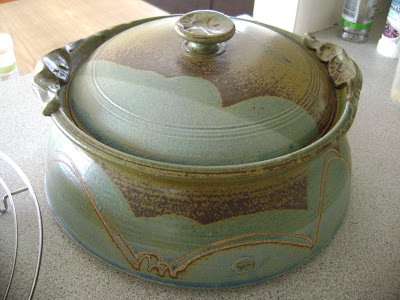 The best part of dinner, though, was eating cake - Raspberry pound cake with lemon glaze, recipe courtesy of Urban Vegan, also by Dynise Balcavage (we love her recipes!) - and drinking tea while playing a completely original, albeit marine biology-centric, board game. Yes, nerdy, but we are.

Email ThisBlogThis!Share to TwitterShare to FacebookShare to Pinterest
Posted by Theresa at 10:35

that pound cake looks outrageous! thanks for sharing! yay potlucks!

Boardgame potluck nights are one of the happiest things in this world. However, my recent plans for one failed when we went to Big W and all the boardgames were stupid. And even the old-school ones I wanted had been update to appeal to today's audience... I DON'T WANT ELECTRONIC BOGGLE AAARGH.

I need some cake.

A night of board games and potluck food like this would make me very happy indeed :) Your dish sounds fantastic and clearly was very well received - it's always nice when meat eaters appreciate vegetarian dishes!

Hannah - we have no board games of our own, which makes me such a sad panda. I tried to convince Andy that we should buy "Where in Space is Carmen Sandiego" from Salvo's for $8, but he thought it was overpriced. However, I have learned that it is possible to *make* a board game and have it not suck, so there's always that?

That casserole dish is gorgeous and so is the pound cake! Sounds like a fun night, I'm sure your own board game was far better than most of the ones going around these days.

What a pretty casserole dish! And a worthy casserole to serve in it. :-)

I'm most excited, though, by this home-made nerdy board game!