A few weeks ago I saw a blog post on No Meat and Three Veg for lentil shepherd's pie. Given that the weather was cold, this set me off on a shepherd's pie craving. When I started to make it, though, I didn't have any recipe in mind. Instead, I winged it (wung it?) and made a lentil- and veggie-full gravy to cover with mash. My mistake was adding too much liquid - I have discarded the photos of the shepherd's pie, because it was so sloppy and there was really nothing pie-like about it.

However! I made way too much filling and we froze half. On another chilly evening, Andy took this out and re-vamped it a bit. He made a roux to thicken the filling up, added some other veggies, and then requested a savoury crumble for the top. I was a bit sceptical, but quickly came around to the idea, and whipped up a mixture of flour, butter, and oats with a few savoury spices. We crumbled, and baked, and filled up our plates with potatoes and broccoli, and the result was not bad. 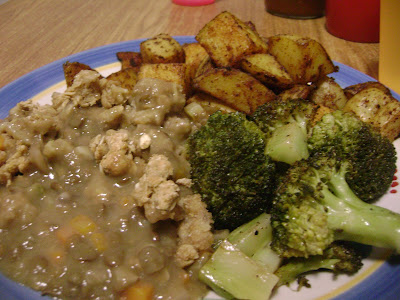 Not exactly a recipe I could even begin to write down in its present state, let alone one I could share, but an interesting idea no less. The crumble topping was crunchy, the bottom filling bit was full of flavour and piles of veggies, and it was especially good with some tomato sauce.
Email ThisBlogThis!Share to TwitterShare to FacebookShare to Pinterest
Posted by Theresa at 14:46

I love veggie crumbles - perfect food for cold weather. Carrots, leeks, potatoes, maybe turnips and swedes, and crumble on top. Just lovely. I think with potatoes and broccoli you've got the perfect foil for a crumble!

Sometimes (often times!) the vague ideas and non-specific recipes are better than the specific ones :) I love that you got some success when you revamped the pie. Hopefully you'll have more successes over winter!

Fascinating idea! I'd have to go with hot chilli sauce over tomato though ;)

oh that looks delicious!! hearty and fabulous!! thanks for sharing!

Glad I indirectly inspired you to create this :) love the idea!

Shepherds Pie is almost a fortnightly rule at home, I think its an English thing. great with a touch of Marmite (or VeggieMite) and soya mince and vegetables yummy!
It never looks that attractive in my pictures.